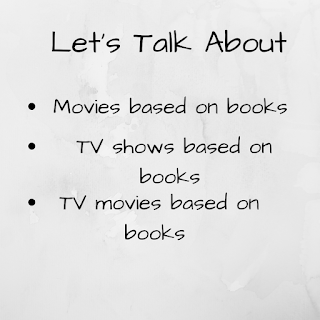 This year I want to do a new post on Fridays where we can discuss a particular book, author, or anything I can come up with. This week I thought I talked about TV/Shows & Movies based on books.
Movies
For me, the movies I've seen based on books that I read have been good in their own right, but they did not touch how good the book is. Like, let's say, Jurassic Park. The book was so much better than the movie. I did like both so that's a plus.
TV Shows
So for me, I will admit that I haven't read many of these books. I'm more of a romance reader but love more suspense while watching tv. But I'd love to hear what you all think. I'm loving the show Will Trent which is based on the series Will Trent by Karin Slaughter. No, I enjoyed Sherryl Woods's books and the shows based on them.
TV Movies
Now this one sets me off. I totally can't stand most of them. Like Rose Hill which is based on Garwood's Rose series. They killed off characters that had books. Ruined the whole movie. I spent most of it yelling at the TV. Didn't care for Lisa Gardner's The Survivors Club. Not only was the main character too old to play the person in the book she had a facelift and looked so weird. Don't even get me started on age and TV movies based on Nora Roberts's books. I will say that I enjoyed Night Sins by Tami Hoag. It was pretty close to the book and well-acted.
All the Above and More
So for me, anything based on a book is 50/50. I will say it's easier if I haven't read the book because then I don't know what I'm missing. But if you are going to put it in the film I'd like them to stick as close to the book as possible. Don't kill off characters that are important to the series. Just don't add them. I'd love to hear your thoughts.