Showing posts from June, 2015
Show all

Excerpt & Giveaway: Put Up Your Duke by Megan Frampton 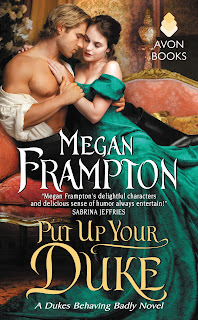 Put up Your Duke Dukes Behaving Badly #2 By: Megan Frampton Releasing June 30, 2015 Avon Blurb He was once happily bedding and boxing, but in the newest DUKES BEHAVING BADLY novel, Nicholas Smithfield has inherited a title and a bride… To keep his estate afloat, the new Duke of Gage must honor an agreement to marry Lady Isabella. Stunningly beautiful, utterly tempting, she’s also a bag of wedding night nerves, so Nicholas decides to wait to do his duty-even if it means heading to the boxing saloon every day to punch away his frustration. Groomed her whole life to become the perfect duchess Isabella longs for independence, a dream that is gone forever. As her husband, Nicholas can do whatever he likes-but, to Isabella’s surprise the notorious rake instead begins a gentle seduction that is melting every inch of her reserve, night by night… To his utter shock, Nicholas’s discovers that none of his previous exploits were half as pleasurable as wooing his own w
6 comments
Read more 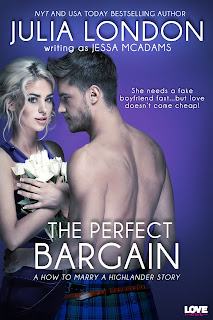 The Perfect Bargain How to Marry a Highlander # 1 By: Julia London writing as Jessa McAdams Releasing June 30, 2015 Entangled: Lovestruck Blurb American lass seeks brawny Scot... As if being newly single isn’t brutal enough, Sloane Chatfield's friends are getting obnoxious about setting her up. When Sloane insists she's waiting for a certain sexy fictional Highlander to come along, her friends surprise her with a trip to Scotland to find her a new boyfriend. She’d rather have a root canal. But if she can find a Highland hunk to “break her heart” before her friends arrive… In a remote Highland village, Galen Buchanan is struggling to keep the family pub afloat. Everything is falling apart, he’s running out of money, and now there's an opinionated American lass parked at his best table, driving him mad. But then Sloane asks Galen to be her pretend Highland boyfriend...and offers him enough money to save the pub. It’s only for a few days, he figures.
Post a Comment
Read more 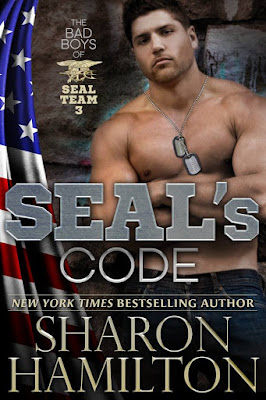 SEAL's Code  Bad Boys of Team 3 (SEAL Brotherhood #10) By Sharon Hamilton Blurb:  Danny Begay has tried to drive out the voices of his ancestors, but his Navajo roots will not die. Summoned back to Arizona to visit his dying grandfather, a former Navajo Code Talker, he knows he has disappointed his hero grandfather. He buries himself one more time in the arms of a stranger before going back to Northern California.  Luci Tohe teaches at a reservation school, safeguarding the health of her ailing mother and little sister’s future, her own life on hold. She doesn’t expect the young Dine warrior she meets to be anything but a distraction from her loneliness. Danny decides to join the Navy, as a SEAL, becoming the man he knew he was destined to be. Before deployment, he goes back to visit the girl he cannot get out of his mind. A dangerous human trafficking element threatens Luci and her family. Danny vows to protect them all. Available for purchase at
2 comments
Read more

We are so excited to bring you the Release Week Blitz for Laura Kaye's HARD TO LET GO! HARD TO LET GO is the 4 th novel in Laura's Hard Ink Series,  published by Avon Romance . Grab your copy of this sexy, suspenseful book today!!     Amazon  |  B&N  |  iBooks |  Kobo Hard to Let Go  on Goodreads EXCERPT Taking a deep breath, Beckett knocked on the door. No answer. He turned the knob, and the door opened. “Go away,” came a strained voice. Beckett poked his head through the opening. Kat sat in a ball in the corner, her legs pulled up to her chest, her arms hugging herself tight. “Aw, Jesus, Beckett. Really?” Her face was splotchy and her eyes watery, though he didn’t see any tears. Ten-to-one she was going through some adrenaline letdown right now, too. Which no doubt made it all worse. That shit could fuck you up even when you were used to how it left you feeling drained and shaky, by how all the stress you’d suppressed during the height of the
2 comments
Read more 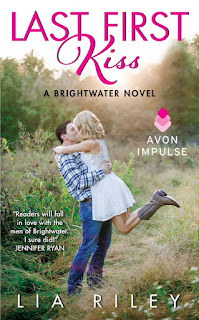 Last First Kiss Brightwater Series Book #1 By: Lia Riley Releasing June 23rd, 2015 Avon Romance Blurb New to Avon, author Lia Riley makes a splash with her first sexy, hilarious book in the sizzling Brightwater series! A kiss is just the beginning… Pinterest Perfect. Or so Annie Carson’s life appears on her popular blog. Reality is... messier. Especially when it lands her back in one-cow town, Brightwater, California, and back in the path of the gorgeous six-foot-four reason she left. Sawyer Kane may fill out those wranglers, but she won’t be distracted from her task. Annie just needs the summer to spruce up and sell her family’s farm so she and her young son can start a new life in the big city. Simple, easy, perfect. Sawyer has always regretted letting the first girl he loved slip away. He won’t make the same mistake twice, but can he convince beautiful, wary Annie to trust her heart again when she’s been given every reason not to? And as a single kiss tu
4 comments
Read more

Excerpt & Giveaway: Summer at the Shore by V. K. Sykes 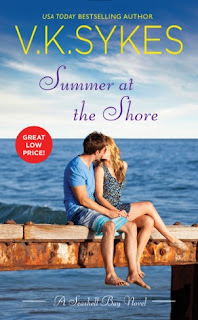 Summer at the Shore Seashell Bay # 2 By: V.K. Sykes Releasing June 30, 2015 Grand Central: Forever Blurb JUST A SUMMER FLING? Morgan Merrifield sacrificed her teaching career to try to save her family's bed-and-breakfast and care for her younger sister. She can't let herself get distracted by Ryan Butler. After all, the rugged ex-Special Forces soldier is only in Seashell Bay for the summer. But her longtime crush soon flares into real desire-and with one irresistible kiss, she's swept away. Ryan values his freedom. As much as he wants Morgan, he's not ready to settle down with anyone, much less in sleepy Seashell Bay. But his code of honor doesn't allow him to leave a woman in distress-and she's in desperate need of help to fix the inn. It only takes one day working under the same roof and Ryan is already hoping for a lifetime of hot summer nights . . . Goodreads Book Link Goodreads Series Link Buy Links Amazon | B &am
6 comments
Read more
More posts