Review: Watch Me by Cynthia Eden 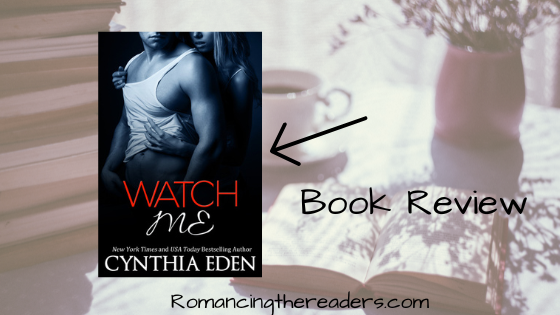 He was hired to protect her.

Watching gorgeous Gwen Hawthorne wasn’t a hard job—but it certainly was tempting. Chance Valentine had tried to keep his distance from the sexy socialite for years, but when her father hired him to keep watch on her—as a twenty-four, seven bodyguard—Chance knew his control was about to be pushed to the limit.

He’d never wanted another woman the way he desired her. Hot. Intense. Consuming. Being so close to Gwen, Chance knew that he wouldn’t be able to resist her. So he gave in to his need, her need, and he took them both to the edge of a dark and consuming desire.

But Chance soon realizes that he isn’t the only one watching Gwen. Someone else is out there, a stalker who won’t rest until Gwen is destroyed. Every day, every moment…Gwen is in danger. And Chance knows that if he can’t unmask the stalker, then he may just lose the only woman he has ever loved. When I find myself unable to get into anything to read I always grab one of my Cynthia Eden books I haven't yet read. I don't know how I forgot to read this series but not that I remembered I'm all in.
As with all of  Eden's books this one has a great alpha hero and a strong heroine that matches him.
What I loved about Watch Me is that here you have two people that really care about each other and until one of them finds themselves in a bad way they do nothing about it. Isn't that how it always is? Well at least in romance books.
Chance is smart & tough, a real in charge kind of guy. I really liked how he'd do anything to protect Gwen and keep her safe. Even when she fights him about it. He let her go before but now won't leave her side.
It seems at first like Gwen didn't care about her safety but she really didn't think anyone was out to get her. As soon as she did she welcomed Chance's protection. That is until she finds out it might have strings attached. She often wonders if he's there because of her father and has issues worrying about that. Not that I blame her, her father is very controlling and very overprotective. You kinda understand why as you get more into the story, but still.
The action in this story is non-stop and will keep you guessing who's good and who isn't. But you'll also get to see why these two are so perfect for one another. As a whole, this is a wonderful story that you'll enjoy reading and will make you want more of the guys who work with Chance. 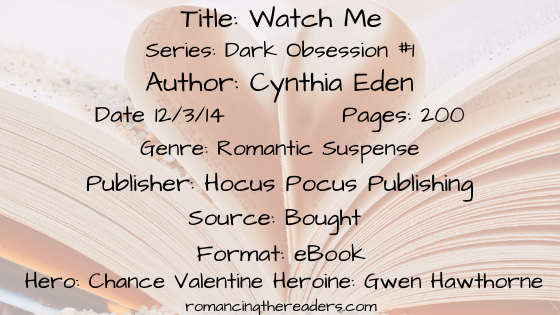