ARC Review: The Bodyguard Next Door by Cynthia Eden 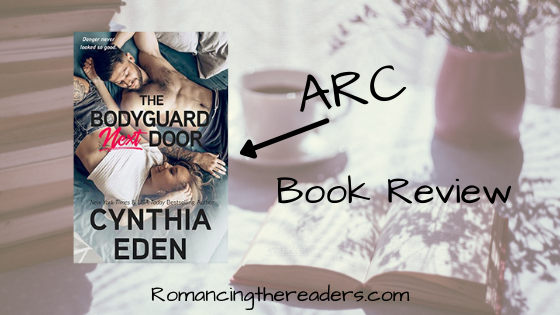 Iris Stuart may have a small crush on her neighbor. After all, Pierce Jennings is gorgeous, muscled, and he has a laugh that makes her toes curl. But she is not going down that particular path of temptation with the former Army Ranger and current Wilde agent. Nope. Not happening. They’ll stay in the friend zone because it’s safer that way. Safer for her—and for him. Even if looking into his baby blues makes her heart race.

She’s sunshine, secrets, and a bit of sin…

Pierce’s new neighbor wears paint-splattered jeans, she smells like sin, and he wants to put his hands all over her gorgeous body. Too bad she’s friend-zoned him. Too bad she’s starring in most of his fantasies. Too bad he can’t get her out of his head.

But when danger comes knocking, he’s just the man she needs.

So Iris may have a slightly infamous past—and a family who more than dabs in art forgeries. Iris inherited some of their not-so-slightly shady skills, and unfortunately, now some dangerous people want to use her. When the bad guys don’t take no for an answer and they try to abduct her, it’s her sexy bodyguard next door who comes to her rescue.

Suddenly, she’s got his protection.

The bad guys want her art skills, the Feds in stiff suits want her to work a sting, and Pierce? He just wants her to be his. And what Pierce wants, he will get. Even if he has to take down an undercover art ring and take on the Feds, he will stay by Iris’s side. He’s not just going to be her bodyguard. Before they are done, he plans to be one hell of a lot more to her… As usual, I'm so happy to read a book by Cynthia Eden. I swear she writes just for me. She knows just the characters I want to read and writes that story.
I'm always happy to sit back and read her stories and The Bodyguard Next Door was no exception. Oh boy is Pierce an alpha hero. He comes off as hard and kinda pushy until you understand that he's so worried about Iris getting hurt. He's the type to want to control everything around him and when he can't it drives him crazy.
Poor Iris has had a very sad life. She was used by her father and abandoned by her brother. You can see right away that she wants someone to love and love her badly. You can't really blame her. Of course, for her, it's hard to know who to trust and she has to work that out for herself. Which isn't easy when she has people coming at her from all sides telling her who she should trust.
There is a ton of action in The Bodyguard Next Door and you'll love the new characters that are introduced. You spend most of the book wondering who's good and who isn't. I love that about Eden's books. She likes to keep you guessing.
I'm happy to say that this ended wonderfully. You are happy for both Pierce and Iris and some new characters you want to know about. I can honestly say that I want more from this series. The Bodyguard Next Door can be read as a standalone. It totally doesn't really touch on the other books in the series but why would you read it alone. Get them all and have the best few days reading them. Have any of you read her? 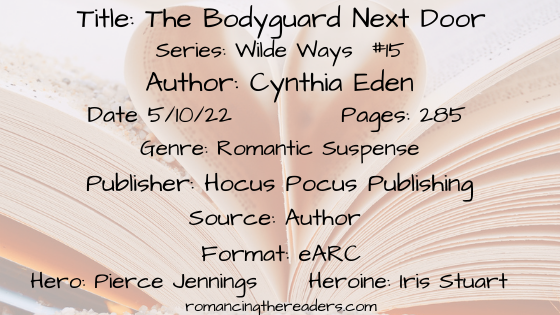