Review: A Magnolia Reunion & The Road to Magnolia by Michelle Major 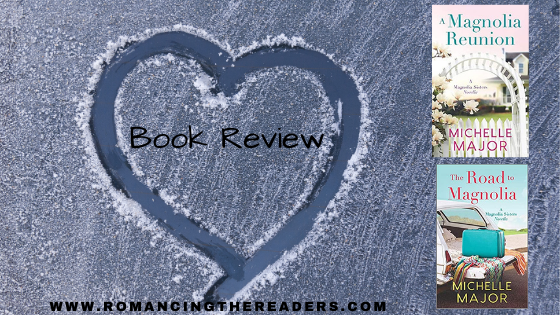 It’s been years since Jennie Copley left Magnolia, NC—and her dreams of happily-ever-after—in the rearview mirror. But when her beloved nana turns ninety, she forces herself to come home for the birthday party…and runs into Lucas Michaels, the boy who broke her heart all those years ago. She’d hoped to never see him again, but life—and Nana—has other plans…

Lucas is still in love with Jennie—time and distance could never change that. When she left for college, Lucas knew she had big dreams and he didn’t want to stand in her way. Now, forced together to plan Nana’s party, he can’t get her off his mind. Jennie is only in town a little while. Can he convince her to give him one more chance?

This is a sweet quick taste of the author's writing. It introduced you to her town and you get a slight feeling of it. I really liked both of the characters and enjoyed the whole idea of the book. I really like Lucas. He's a great guy who's always cared about Jennie. She too cares about him but felt hurt about his actions when they were younger.
This is a quick read, only about 50 pages so you can easily get through it in one sitting. You won't have to read it to read the other books in the series but it won't hurt either.

When her father suffers a serious injury, down-on-her-luck waitress Lily Wainwright has to figure out a way from California back to her hometown of Magnolia, North Carolina—with no money, no car and her giant Great Dane in tow. Lucky for her, Lily’s boss is owed a big favor from her nephew Garrett, and she’s calling it in on Lily’s behalf. What Lily doesn’t know is that her boss has reasons of her own for getting Garrett out of LA.

As Garrett and Lily begin the journey east with only each other for company, what started as a simple—if reluctant—act of goodwill turns unexpectedly romantic. But with Garrett’s dream to prove himself in Hollywood and Lily’s determination to forge a new path in her hometown…will their newfound connection survive the distance?

I really enjoyed this one more than the first novella in the series. I loved both Garrett and Lily. Poor Garrett does a favor for his aunt that leads him to love so maybe it's not poor Garrett after all. He is a good guy who did a nice thing for Lily.
You'll also like Lily a lot but feel for her for letting her mom cause her to waste so much of her life. It was kinda sad. What was sadder is that when things went badly for her she didn't feel like she had her family to turn to. I will say she came out of all the crap with the love of her life, a great boss, and the cutest dog. This one also doesn't need to be read to read the series but I think you'll enjoy it. It's only about 40 pages so another quick read.