Review: A Highlander is Coming to Town by Laura Trentham 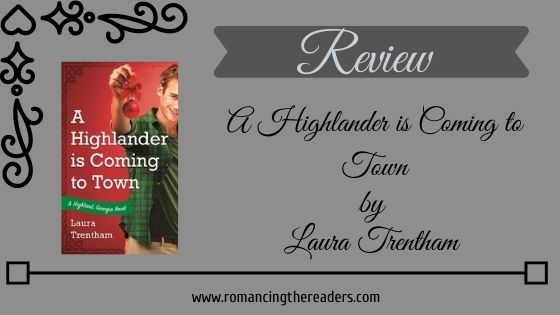 Holt Pierson is dreading Christmas. His parents absconded to Florida for the season and left him to handle the family farm which will be his one day―whether he wants it or not. Driven by duty, Holt has always followed the path expected of him. But lately, he’s been questioning what he wants and where he belongs. Will assuming the responsibility of the Pierson farm make him happy or is there something―or someone―else out in the wider world calling to him?

To Claire Smythe, the Scottish lead singer of a touring band, Highland, Georgia, is the perfect place to hide... .until a very handsome and deeply curious Holt begins to ask all the questions Claire doesn’t want to answer. As Holt draws Claire out from under and into the fabric of small-town life, can Claire put the past behind her and embrace the unexpected gifts of the season―including the new and lasting love? 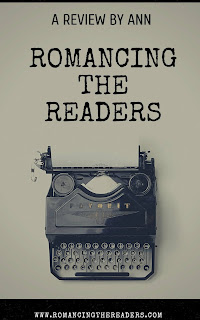 Often with a favorite author, I won't read the blurb of an upcoming book before I read it. More so when it's part of a series. I know what I'm in for with already visiting the town. So I just usually start reading. It's never been a problem until this book. I was so lost in the beginning. I felt like I was missing something and it caused me to have a slight issue getting into it.
I think in part that was due to the cover and title. I kinda thought the book was about a new male character. That's was on me.
Once I realized it was about Holt I was thrilled I really like him and have wanted his story since he was first introduced. At first, I wasn't sure if Claire was the right woman for him. He's such a sweet, wonderful guy that I wanted someone special for him. It took a bit for me to warm up to Claire and think she is special. But I eventually did.
I liked how Claire took care of Mrs. Meadows. It showed her softer side. She worked hard to make her happy and it showed in how much Mrs. Meadows liked her. I'm so glad that living with her taught her to stand on her own two feet.
Holt also helped with that. He showed her how life should be. They spent a wonderful time enjoying the holidays and being with each other. You really see how nice these two are together. I have a wonderful time visiting with the people of Highland. 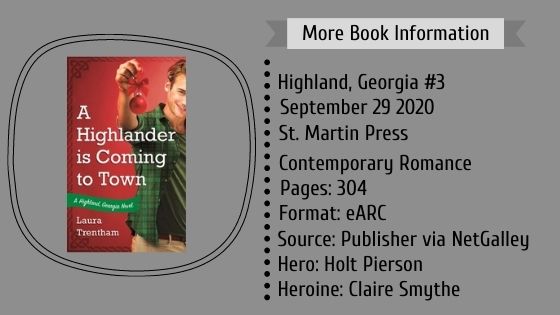