Review: The Cowboy Says I Do by Dylann Crush 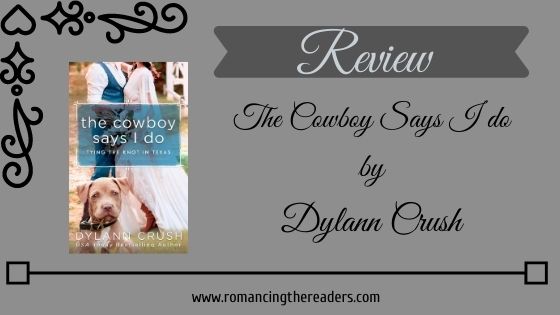 Newly elected mayor, Lacey Cherish, ran for office to redeem the family name after her father had to resign for un-mayorly like conduct. But if she wants to salvage her family's reputation, along with the town's economy, she'll need to think fast. With few options at hand, she starts to rebrand Idont as Ido, as the most romantic place in Texas to tie the knot.

Lacey's grand plans have just made Deputy Sheriff Bodie Phillips's life a whole lot harder. He's got bigger problems than helping the mayor bring in brides. Like figuring out why his dad and grandfather mysteriously shut down the family business, and who's abandoning dogs within the town limits.

When Lacey's chance at getting major publicity for Ido's first wedding is jeopardized, she's forced to rely on Bodie for help. But as their attraction heats up, they both have to decide how far they're willing to go to revive the town and their families' honor. 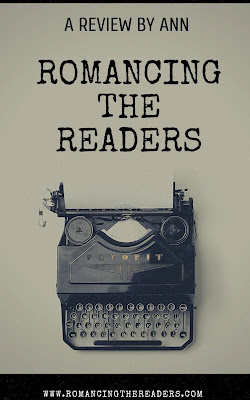 I've never tried a book by Dlyann Crush so I couldn't wait to give her a try. I love trying new authors Some I like others not so much. But without trying so one new how would I know.
I really enjoyed The Cowboy Says I Do. I liked both Lacey and Bodie. They worked together even though at times I think Lacey was crazy rude to Bodie for no apparent reason. I get that she was working so hard to save her town and show that her family could do the job but still...
I really liked her idea of how to save the town and was glad so many people tried to help her. What she and Brodie did isn't a new theme in books but still, a fun read. Poor Lacey has so much going against her as the new mayor as it is, having one of the biggest employers close down doesn't help.
Who I felt the most for is Bodie. This poor guy is forced to make some very tough choices. I couldn't help by feel for him. Often you see him putting his job and Lacey above family and you don't blame him at all but you do feel for him. It has to be hard.
These two don't have an easy courtship but a fun one to read about. I really can't wait to see what happens now with the changes to the town. I think it will make for a fun series. My only very small issue with the book is that I didn't feel the title matched the story at all. In fact, if you are going into the book looking for a cowboy you aren't going to find him.
One of the things I really did like that the author did was make Bodie a deputy instead of the sheriff. It was nice to see a plain working guy. I'm not saying he at some point can't move up to sheriff it was just nice to see where he started.
As I mentioned, this is a fun read, one that left me wanting more of the town of I Do. Also, you have to admit it has a really great cover. Have any of you read her before? 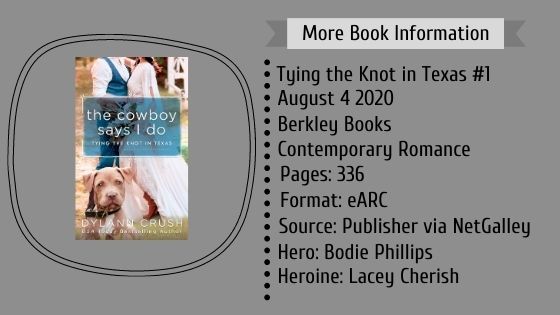