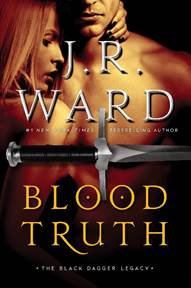 The #1 New York Times bestselling author of The Savior brings you the next sizzling and passionate paranormal romance in the Black Dagger Legacy series.

As a trainee in the Black Dagger Brotherhood’s program, Boone has triumphed as a soldier and now fights side by side with the Brothers. Following his sire’s unexpected death, he is taken off rotation against his protests—and he finds himself working with Butch O’Neal, former homicide cop, to catch a serial killer: Someone is targeting females of the species at a live action role play club. When the Brotherhood is called in to help, Boone insists on being a part of the effort—and the last thing he expects is to meet an enticing, mysterious female...who changes his life forever.

Ever since her sister was murdered at the club, Helaine has been committed to finding the killer, no matter the danger she faces. When she crosses paths with Boone, she doesn’t know whether to trust him or not—and then she has no choice. As she herself becomes a target, and someone close to the Brotherhood is identified as the prime suspect, the two must work to together to solve the mystery...before it’s too late. Will a madman come between the lovers or will true love and goodness triumph over a very mortal evil?


Catch up on unique terms in the Black Dagger Brotherhood universe...and their IRL inspirations!

Boone’s shitkickers shredded the frozen tire tracks down the middle of the alley, his powerful body churning through the dirty city snow, air sucking into his lungs cold and punching out hot as steam from a locomotive’s stack. In his right hand, he had a twelve-inch serrated hunting knife. In his left, a length of chain.

Up ahead, by about thirty feet, a lesser was running as if its undead life depended on all the Usain Bolt the thing was pulling. The telltale sickly sweet stench of the enemy was thick in its wake, a tracker that Boone’s sensitive nose had picked up on seven blocks ago. The slayer was sloppy of foot, flappy of hand, and given how saturated its smell was, Boone wondered whether it was already injured.

The Black Dagger Brotherhood’s commanding officer, Tohrment, son of Hharm, set the nightly territories for the Brothers and fighters, carving up sections of downtown into quadrants that would be stalked for the enemy. Trainees such as Boone were paired with more experienced people, either Brothers or members of the Band of Bastards, in the interest of safety—especially as there was a new threat out on the streets.

Boone glanced over his shoulder. Tonight, he was working with Zypher. The Bastard was a great partner, a big, brutal male who nonetheless had a teacher’s patience and an eye for constant improvement.

It was supposed to have been Syn. And a relief when it wasn’t.

Boone’s favorite to work with, bar none, was Rhage. But the Brotherhood was otherwise occupied tonight. Every last one of them.

And Boone was the one who had set them on a mission that he hoped and prayed didn’t result in death.

In the intervening twelve months since their blowup over the broken arrangement, he and Altamere had settled into an uneasy détente. Which was what happened when you finally called a bully on their push-and-shove. The two of them kept up appearances, something that was not hard given how starchy and superficial their relationship had always been, but Boone had drawn a line and instead of the threatened repercussions, in return he’d gotten a retreat of hostility.

He probably should have moved out, but as petty as it was, he had enjoyed getting the upper hand and keeping it. Especially after he joined the Brotherhood’s training program, something he was well aware his father disapproved of. Altamere’s “son” a soldier? Fighting in the war? How brutish. The move had made Boone’s bookish decades seem like a fine hand of cards.

But he loved the challenge and he was damn good at the work—and a new kind of life and rhythm had started, where he and his sire rarely saw each other.

Except then came the invitation: The pleasure of his father and stepmahmen’s company requested at an aristocrat’s home this very evening. Going by the card stock alone, it was clear that other members of the glymera were included on the guest list.

It had been the first time in a year that Boone had spoken to his sire about anything of note. Yet how could he not urge the male to stay home? That viper pit of aristocrats had already tried to take down Wrath’s throne, and if they were planning another attempt?

The training center had taught him in detail all of the things the Brothers were capable of doing to someone who crossed them. And he might not like his father . . . but that was the point. With his alarm bells going off about treason, if he didn’t at least try to keep the male away from that party, he would feel like he had killed Altamere himself.

And that was too close to what he had at times wanted to do, and who needed to live with that guilt?

Predictably, his father had refused the wise counsel. So Boone had gone to the Brothers directly, and that was why he was paired with a member of the Band of Bastards this fine, crystal-cold winter’s evening.

Refocusing on his hunt, he threw some more speed into his legs, his thighs beginning to burn, his calves tightening, his bum ankle issuing the first of what was going to be a lot of complaints. All of that was background chatter easily ignored, utterly forgettable.

Just breathe, he told himself. The more oxygen he could get into his lungs, the more he got into his blood, fuel for his muscles, speed for his body.

And what do you know, he was closing the distance. The problem? He was getting farther and farther away from Zypher, who was dancing with a slayer of his own three blocks—now four blocks—back.

Time to do this.

Per protocol, he hit the locator beacon on his shoulder to notify the other squads that he was about to engage. And then he closed his eyes.

Dematerializing was something that vampires ordinarily had to concentrate and calm themselves in order to accomplish. Boone, however, had trained himself to find that place of inner equilibrium even when he was running full tilt boogie in pursuit of the enemy. And courtesy of all his practice, his physical form disintegrated into a scatter of molecules and he shot forward, passing the lesser.

He re-formed in front of the enemy, his boots planted, his knife up and his chain down, ready to party.

The slayer did what it could to slow its roll, arms pinwheeling, shoes slapping at the snow and skidding as it tried to stop on ice. Momentum was not its friend. Unlike some of the scrawny new recruits, this one had a football player’s thick neck and barrel chest, and all that body weight was a boulder bouncing down the side of a mountain, all keep-going instead of back-that-ass-up.

As he had been trained to do, Boone’s peripheral vision imprinted the alley’s contours and possible cover opportunities. His brain also did a lightning-quick assessment of threat potential, cataloguing fire escapes, rooflines, doorways, and windows, all of his instincts feeding information into the calculation of his own safety. On the physical side, his body braced for contact.

And the length of chain began to swing.

Boone wasn’t aware of giving his hand and arm that particular command, but things had started happening like that in the field over the past month. According to the Black Dagger Brother Vishous, there were four levels of skill development: unconsciously unskilled, which meant you didn’t know how much you didn’t know and couldn’t do; consciously unskilled, which was when you began to be aware of how much you needed to develop; consciously skilled, which was the level at which you started to use what you’ve trained yourself to do; and, finally, unconsciously skilled.

Which was what happened when your body moved without your brain having to micromanage every molecule of the attack. When your training formed a basis of action so intrinsic to who you were and what you did in a given situation that you were unaware of any cognition occurring. When you entered “the Zone,” as the Brother Rhage called it.

Boone was in that sweet spot now.

The whirring sound of the chain links circling beside him was soft yet menacing, like the easy breathing of a great beast—and Boone knew the second the slayer was going to move because one of its shoulders lifted and its hips angled ever so slightly.

The knife the lesser had tucked in its hand came flying out at Boone end over end—proof that Boone’s subconscious hadn’t considered quite everything. But his reflexes were on it, jerking his torso to one side, the surge of aggressive energy flowing through him so acute, so pleasurable, it was almost sexual.

His counterattack started with the chain. Licking the links out, he sent them around the slayer’s neck, a snake of metal with a tail that swung wide and doubled up on itself. With a tight loop locked in, he yanked with his full body.

The slayer pitched forward into the snow face-first.

And that was when Boone lifted his own hunting blade over his shoulder.