Today we have the exciting new release from Hallmark! Check out the blog tour for Beach Wedding Weekend by Rachel Magee and be sure to grab your copy today!! 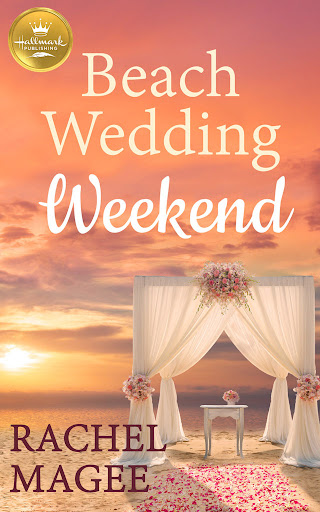 You’re invited to a sunny beach town for a witty, heartwarming romance. When Brody broke up with Paige and went to Europe, he suggested that someday, they’d pick up right where they left off. A hopeless romantic, she believed him. But when they meet again, Brody’s dating a gorgeous actress. They’re all going to attend the same wedding, and Paige plans to win Brody back. She even enlists her best friend’s brother, Aiden, to pretend to date her and make her ex jealous. A breezy, charming restaurant owner, Aiden actually avoids serious relationships, but as a fake boyfriend, he’s perfect. As old friends and exes take part in wedding preparations and enjoy the beauty of the Florida coast, they begin to see themselves—and each other—in a new light. This summer romance includes a free Hallmark original recipe for BBQ Brisket Tacos with Sunshine Slaw.

Ciera leaned across her to fill Gram in. “Paige’s ex-boyfriend is back in town and he brought an actress with him.” She snagged the fork from Paige and pulled the cake in front of herself.

Gram nodded as if considering the situation. “And how much of a looker is this new girl?”

Ciera shot Aiden a worried look. Paige appreciated her friend trying to spare her feelings, but it wasn’t a secret. Anyone with eyes could see what kind of beauty they were dealing with. Paige looked right at Gram and gave her the most honest answer she could think of. “She could launch a thousand ships.”

“I see.” Gram twisted her mouth to the side in thought. “This reminds me of the time when Lorissa’s ex-husband returned with a supermodel who was as dumb as a box of rocks.” Gram often lacked a filter. Whatever thought ran through her head came out of her mouth, which Paige loved. It was always entertaining and so different from anything she’d grown up with.

“Are these real friends or soap opera friends?” Aiden asked. Until Paige met Gram, she was unaware soap operas still existed. Apparently they did. And Gram still watched them with diligence.

Gram gave Aiden a stern look. “Soap opera friends are real friends, dear.” She turned to Paige. Her weathered hand wrapped around Paige’s. The warm, maternal gesture was like a hug to her broken heart. “Did you love him?”

Visions of their year together paraded through her mind. Happy memories of sweet moments when the word forever sparkled with anticipation.

Sympathy flashed across Gram’s face. “Do you still love him?” Her voice was a little quieter this time, a little more personal. Which seemed appropriate since the question felt personal.

Sure, her heart had broken when he left, which dampened love’s euphoric glow, but hope had managed to keep some of the spark alive. In the back of her mind, even on her loneliest days, she clung to the image of him coming back. Someday they could pick up right where they left off, share life together, grow old together. That was love, right?

Gram squeezed her hand, her voice returning to its normal cheerful tone. “Then do what Lorissa did.”

Confusion fluttered through her. Gram’s sage advice was coming from a soap opera character? “What did she do?”

“She gave him the ole’ one-two.” Gram let go of Paige’s hand and held her fists in front of her face, jabbing the air in dainty punches. “You have to fight for love.”

“It’s your life, kiddo. You gotta go after what you want.” Rachel wrote her first novel when she was twelve and entered it into a contest for young author/illustrators. Unfortunately, the judges weren't impressed with her stick figures, so she dropped the dream of becoming a world-famous illustrator and stuck to spinning stories. When she's not busy working on her latest book, she loves to travel with her family and friends. By far, her favorite destination is the beach, which tends to work its way into most of her stories. Between vacations, you can find her at home in The Woodlands, TX with her wonderful husband, their two adventurous kids and a couple of spirited pets.