Review: Worth the Wait by Lori Foster 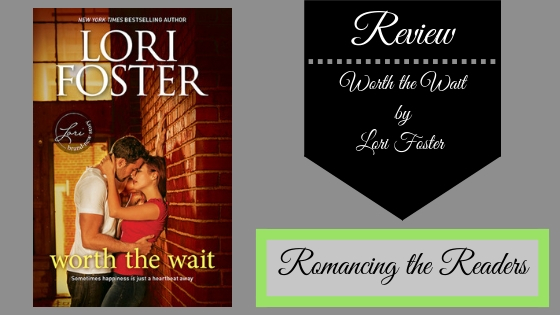 Single dad Hogan Guthrie is getting his life back on track, and working as the "barbecue master" at a local diner is just a temporary detour. He and restaurant owner Violet Shaw constantly butt heads…until one night they end up mingling other parts instead. Hogan thought he had the recipe for happiness all figured out. But loyal, carefree Violet is daring him to trust his impulses…and see just how sweet small-town living—and loving—can be.

Nathan Hawley traded his SWAT team credentials for a sheriff's badge, but a gorgeous new neighbor is shaking up his orderly life. Nathan has a hunch there's more to Brooklin Sweet than meets the eye—but given her caution about getting involved, he has his work cut out for him. Still, there's something about the elusive beauty Nathan can't walk away from—and helping her come to terms with her past might pave the way to the future they both secretly long for. 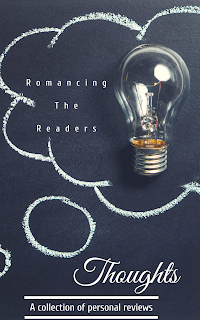 It really feels good when you start to catch up on the authors that you enjoy. It's been a while but I pulled Worth the wait to read and review. I read the first book Don't Tempt Me when it came out and really planned to read this one when it came out in 2017 but time got away from me.

Since this year I am trying to read more of the books I have laying around. They are everywhere and since I spent all this money to buy them I think it's time that I at least try to put a dent in the piles.

So saying that I decided to pick up Worth the Wait and I'm glad I did. I was able to get lost in the story. You know what I mean when one second you start it and the next it's an hour later and you don't remember anything that happened in that hour other than what you just read.

I love those books.

This book is really two stories written together so I'm going to break them down for you. I'll start off by telling you that as a whole this story is very good. It leads off a little after Don't Tempt Me and continues when the characters you met in that book. What I really loved is that she kept Jason, Honor, Lexie, and Sullivan. I really enjoyed them from the first book and was glad to enjoy them again in this one. Of course, Colt is in the story but that's a given since he's Hogan's son.

Hogan and Violet
I really liked these two together. More than once they made me smile. I like how they tease each other and I loved how when Violet decides to finally give in to him that all she can think about is sex. It's so funny. It was like once she gave her body permission to do what it wanted it was all she could think about.

I was also pleased by the way she treated Colt. He's very important to Hogan and I can't see him falling for any woman who didn't treat his kid good. One of the reasons he finally allowed himself to fall in love again was because of the way Violet treated his kid.

I don't blame Hogan for wanting to not take a chance on love again. He went through hell and it took him a while to realize that was an end to it.

Nathan & Brooklin
I totally loved Nathan. He was so steamy. All I kept thinking as I read his and Brooklin's story was that he could jog with me any time. Of course, I would have to take up jogging first and I'm pretty sure it would kill me so...

I thought the way he pursued Brooklin was sweet. He gave her time to get used to him and didn't rush her. He saw that rushing a relationship wouldn't work and played it cool.

Brooklin needed friends who didn't judge her or think badly of her and she found them. Once she did she was able to relax and start having a life again. When she most needs it Nathan is there for her and that meant a lot to her.

The whole story!
As I mentioned above this is a great story that's very well written with enjoyable characters that will leave you wanting more. More of this town, more of these characters, more of everything.

I did enjoy the story very much but like I said in my review of Don't Tempt Me, I really wish Nathan and Brooklin had their own story. I really loved him and wanted more of him. You get more of Hogan and Violet which is understandable because this short little series is about the brothers. Still, one could hope.

What didn't work for me is that I felt that Violet and Brooklin are one person. They both kind of acted the same. Both of them closed off, they both wanted to do everything on their own even if it was impossible to do so. I think each couple should have had their own story. The likeness was glaring.

Other than that I enjoyed it. They are all great characters. Very much worth the read. Like what I did there?

So, have you read her before? 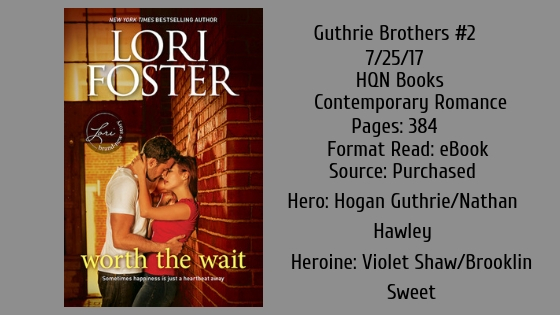