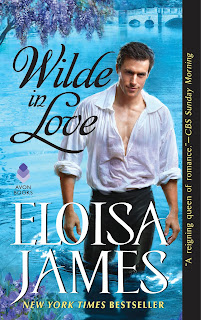 The first book in Eloisa James’s dazzling new series set in the Georgian period glows with her trademark wit and sexy charm—and introduces a large, eccentric family. Readers will love the Wildes of Lindow Castle!

Lord Alaric Wilde, son of the Duke of Lindow, is the most celebrated man in England, revered for his dangerous adventures and rakish good looks. Arriving home from years abroad, he has no idea of his own celebrity until his boat is met by mobs of screaming ladies. Alaric escapes to his father’s castle, but just as he grasps that he’s not only famous but notorious, he encounters the very private, very witty, Miss Willa Ffynche.

Willa presents the façade of a serene young lady to the world. Her love of books and bawdy jokes is purely for the delight of her intimate friends. She wants nothing to do with a man whose private life is splashed over every newspaper.

Alaric has never met a woman he wanted for his own . . . until he meets Willa. He’s never lost a battle.

But a spirited woman like Willa isn’t going to make it easy. . . .


There wasn’t a person in all England who’d have believed the boy who grew up to be Lord Alaric Wilde would become famous.

Infamous? That was a possibility.

His own father had given him that label after Alaric was sent down from Eton at the age of eleven for regaling his classmates with stories of pirates.

Piracy wasn’t the problem—the problem was the uncanny way young Alaric had depicted his small-minded Etonian instructors in the guise of drunken sailors. These days he avoided portraying self-righteous Englishmen, but the impulse to observe had never left him. He watched and summarized, whether he was in China or an African jungle.

He had always written down what he saw. His Lord Wilde books were a consequence of that impulse to record his observations, a drive that appeared as soon as he learned to write his first sentences.

Like everyone else, it had never occurred to him that those books could make him famous. And he didn’t think any differently when he rolled out of his berth on Royal George. All he knew in that moment was that he was finally ready to see his family, all eight siblings, not to mention the duke, duchess, and a stepsister or two.

He’d stayed away for years, as if not seeing his eldest brother Horatius’s grave would make his death not true.

But it was time to go home.

He wanted a cup of tea. A steaming hot bath in a real bathtub. A lungful of smoky London air.

Hell, he even missed the peaty smell that hung over Lindow Moss, the bog that stretched for miles to the east of his father’s castle.

He was drawing back the curtain over the porthole when the ship’s boy knocked and entered. “There’s a mighty fog, milord, but we’re well up the Thames, and the captain reckons we’ll be at Billingsgate Wharf any minute.” His eyes shone with excitement.

Upon on deck, Alaric found Captain Barsley standing in the prow of the Royal George, hands on his hips. Alaric started toward him and stopped, astonished. Through the fog, the dock glimmered like a child’s toy: a blurry mass of pink, purple, and bright blue. It separated into parts as the ship approached.

The dock was crowded with women—or, more precisely, ladies, considering all the high plumes and parasols waving in the air. A grin tugged at the corners of Alaric’s mouth as he joined the captain.

“What in the devil is going on?”

“I expect they’re waiting for a prince or some such foolishness. Those passenger lists they print in the Morning Chronicle are utter rubbish. They’re going to be bloody disappointed when they realize the Royal George hasn’t a drop of royal blood aboard,” the captain grumbled.

Alaric, who was related to the crown through his grandfather, gave a shout of laughter. “You have a noble nose, Barsley. Perhaps they’ve discovered a relation you never heard of.”

Barsley just grunted. They were close enough now to discern that ladies were crowded as far back as the fish market. They appeared to be bobbing up and down like colored buoys, as they strained to see through the fog. Faint screams suggested excitement, if not hysteria.

“This is Bedlam,” Barsley said with disgust. “How are we supposed to disembark in the midst of that?”

“Since we’ve come from Moscow, perhaps they think the Russian ambassador is on board,” Alaric said, watching a rowboat set out toward them, manned by a dockworker.

“Why in the devil’s name would a flock of women come looking for a Russian?”

“Kochubey is a good-looking fellow,” Alaric said, as the boat struck the side of the ship with a thump. “He complained of English ladies besieging him, calling him Adonis, and sneaking into his bedchamber at night.”

But the captain wasn’t listening. “What the devil are those women doing on the wharf?” Captain Barsley roared, as the dockworker clambered over the side from the rowboat. “Make way for my gangplank, or I won’t be responsible for the fish having a fine meal!”

The man dropped to the deck, eyes round. “It’s true! You’re here!” he blurted out.

But the man wasn’t looking at Barsley.

He was looking at Alaric. 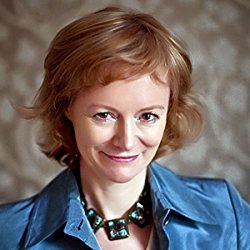 ELOISA JAMES is a New York Times best-selling author and professor of English literature who lives with her family in New York, but can sometimes be found in Paris or Italy. She is the mother of two and, in a particularly delicious irony for a romance writer, is married to a genuine Italian knight. Visit her at www.eloisajames.com. 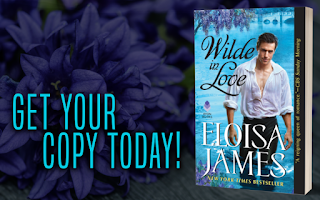