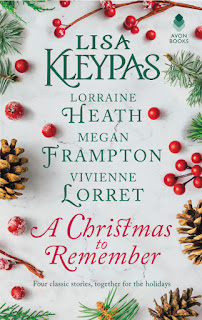 Romance stars Lisa Kleypas, Lorraine Heath, Megan Frampton, and Vivienne Lorret prove in this collection of stories that love is the most magical during Christmas…

"I Will" by Lisa Kleypas

To be reinstated into his father’s will, Andrew, Lord Drake, must court a respectable woman-his friend’s spinster sister, Miss Caroline Hargreaves. After he blackmails Caroline into helping him, the charade begins-but is it really a charade once love takes hold of their hearts…?

"Deck the Halls With Love" by Lorraine Heath

Alistair Wakefield, the Marquess of Chetwyn, devastated Lady Meredith Hargreaves when he proposed to another. But when he becomes free to pursue her, it’s too late for she’s on her way to the altar…. As Christmas approaches, Chetwyn vows to lure Lady Meredith back into his arms.

"No Groom at the Inn" by Megan Frampton

James Archer detests his mother’s matchmaking ways. When ordered to attend a Christmastime house party filled with simpering maidens, he produces a fiancée-Lady Sophronia Bettesford. James and Sophronia pretend to be in love for one month. But their pact soon turns into love.

To the Duke of Vale, science solves everything-even marriage. When the impulsive Ivy Sutherland makes him question all of his data, he realizes that he’s overlooked a vital component in his search for the perfect match: love.

Excerpt from Lisa Kleypas’s “I Will”

IT WAS NOT easy to ask a favor of a woman who despised him. But Andrew, Lord Drake, had always been beyond shame, and today was no exception. He needed a favor from a morally upright woman, and Miss Caroline Hargreaves was the only decent female he knew. She was proper and straitlaced to a fault . . . and he wasn’t the only man to think so, judging by the fact that she was still unmarried at the age of twenty-six.

“Why are you here?” Caroline asked, her voice threaded with quiet hostility. She kept her gaze fastened on the large square frame propped by the settee, a wooden lace stretcher used to reshape curtains and tablecloths after they were washed. The task was a meticulous one, involving sticking a pin through each tiny loop of lace and affixing it to the edge of the frame until the cloth was drawn tight. Although Caroline’s face was expressionless, her inner tension was betrayed by the stiffness of her fingers as she fumbled with a paper of pins.

“I need something from you,” Andrew said, staring at her intently. It was probably the first time he had ever been completely sober around her, and now that he was free of his habitual alcoholic haze, he had noticed a few things about Miss Caroline Hargreaves that intrigued him.

She was far prettier than he had thought. Despite the little spectacles perched on her nose, and her frumpy manner of dressing, she possessed a subtle beauty that had escaped him before. Her figure was not at all spectacular—Caroline was small and slight, with practically no hips or breasts to speak of. Andrew preferred big, voluptuous women who were willing to engage in the vigorous bedroom romps he enjoyed. But Caroline had a lovely face, with velvety brown eyes and thick black lashes, surmounted by dark brows that arched with the precision of a hawk’s wing. Her hair was a neatly pinned mass of sable silk, and her complexion was as fine and clear as a child’s. And that mouth . . . why in God’s name had he never noticed her mouth before? Delicate, expressive, the upper lip small and bow shaped, the lower curved with generous fullness.

Right now those tempting lips were pulled tight with displeasure, and her brow was furrowed in a perplexed expression. “I can’t conceive of what you could possibly want from me, Lord Drake,” Caroline said crisply. “However, I can assure you that you won’t get it.” 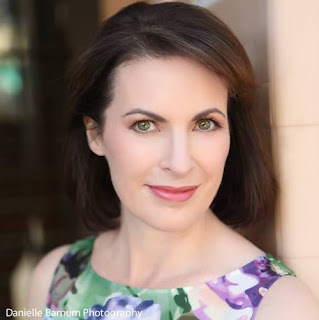 New York Times bestselling author Lisa Kleypas graduated from Wellesley College with a political science degree. She is a RITA award winning author of both historical romance and contemporary women’s fiction. Her novels are published in fourteen different languages and are bestsellers all over the world. She lives in Washington State with her husband Gregory and their two children.

Lorraine Heath always dreamed of being a writer. After graduating from the University of Texas, she wrote training manuals, press releases, articles, and computer code, but something was always missing. When she read a romance novel, she not only became hooked on the genre, but quickly realized what her writing lacked: rebels, scoundrels, and rogues. She’s been writing about them ever since. Her work has been recognized with numerous industry awards, including RWA’s prestigious RITA. Her novels have appeared on the USA Today and New York Times bestseller lists.

Megan Frampton writes historical romance under her own name and romantic women’s fiction under the name Megan Caldwell. She likes the color black, gin, dark-haired British men, and huge earrings, not in that order. She lives in Brooklyn, New York, with her husband and son. You can visit her website at http://www.meganframpton.com. She tweets as @meganf and is at Facebook.com/meganframptonbooks.

Vivienne Lorret loves romance novels, her pink laptop, her husband, and her two teenage sons (not necessarily in that order . . . but there are days). Transforming copious amounts of tea into words, she is the author of Avon Impulse’s “Tempting Mr. Weatherstone” and The Wallflower Wedding Series. For more on her upcoming novels, visit her at http://www.vivlorret.net. 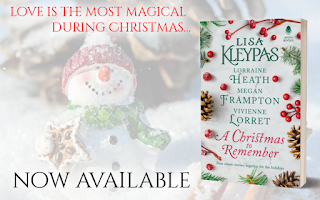