Today we are doing our... 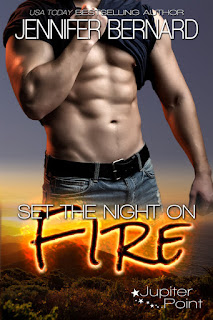 Firefighter Sean Marcus left Jupiter Point thirteen years ago in disgrace, but now he’s coming home to set the record straight. As the leader of the new Jupiter Point Hotshots wildfire crew, he’s out to prove he’s no longer the troubled boy who fled after a night of shocking violence. He’s returned for one reason only--and it’s not to fall in love. But that plan goes up in smoke the minute he sets eyes on Evie McGraw, all grown up and gorgeous.

The town sweetheart has a secret

Evie has never spoken about the night that changed her life. But she can’t escape it, especially now that her brother’s wild friend Sean is back. Rugged, sexy and impossible to ignore, he’s the only one who knows what truly happened. Evie gave up everything to protect her family, but now, she has to make a choice. Keep silent…or put her heart on the line and let Sean help heal the past?

Let the hotshots of Jupiter Point light up your night!

I'm not sure how I let myself get behind on reading Jennifer Bernard. I really do love her firemen. So hot! Like the play of words? That's the wonderful thing about Book Club Thursday's Clearing off the Bookshelves, I get a chance to read the books that have been sitting around waiting for me.

Set the Night on Fire is book one of the the Jupiter Point series. It starts off whats looks like a great new series from her.

The beginning of this book is so scary and intense. I loved it! Right away your into the story and want more. After the first chapter it only gets better.

I love Sean, he's such a great guy that has had to go through a bunch of shit growing up. All he went through made him the best man that he is. Even though he knew that coming home wouldn't be easy on him, he did it anyway. It's never easy to face the past.

I also enjoyed Evie but wish she didn't have such a hard time standing up for herself. She learned the hard way that emotions and guilt pushed aside come out when you least except them too.

Set the Night on Fire, is a emotionally driven story that keeps you in the story and won't let you out until the story is over. I'm not going to wait so love to read the next book in the series.

If you're are a fan of Bernard's The Bachelor Firemen of San Gabriel, you'll love the Jupiter Point series. Don't even get me started with that series. LOVED IT!!!!

If you've read Set the Night on Fire or any other book by Jennifer Bernard I'd love to hear your thoughts. Thanks for visiting and happy reading! ♡

Cyndi @ Born to Read Books | Karen @ The Many Faces of Romance