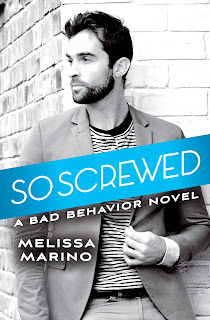 He's charming, wicked, and handsome . . . and she needs to stay away

For Evelyn Owen, work comes first. Being a wedding planner to the city's elite fills her nights and weekends, and she doesn't have time for distractions. Especially in the form of a sexy bartender with killer dimples . . .

Abel Matthews knows how to serve the ladies. But lately, the only woman he wants is just out of reach. That's because Evelyn has already been warned about his playboy ways. Still, there's something about her that makes Abel want more than a quick fling.

Evelyn knows that she shouldn't trust Abel. Yet she's seen a side of him no one else knows, and she can't turn away. But Abel is hiding something from her . . . and if he doesn't confess soon, it will tear them apart.

As the door clicked shut, I found myself pushed up against it, Abel pressing his body into me. He swooped down, pressing his lips tightly to mine before opening his mouth and allowing his tongue to find mine. Deep kisses, his hands in my hair and mine gripping the back of his neck, led to a now-familiar sigh falling from his lips.

“That’s more like it,” he mumbled against my mouth. “I missed you.”

The words, along with his beard, tickled me inside and out. He missed me. It was like Callie had said—we were gooey. He smiled and rested his hands on my hips. His fingers fumbled around the middle of the jumpsuit I was wearing before he reached around my back, his hands smoothing across to my ass.

“What are you doing?” I asked.

“Trying to find your skin so I can touch you.”

I stifled a moan because it was the exact thing that made me weak. His moves in bed were amazing, but he had perfected his art of words very well. I would’ve liked to have attributed it to his English major background, but I knew better. He had a lot of practice.

He grabbed my ass, giving it a squeeze. “That’s too bad. What else is too bad is I’m pretty sure you’re not wearing underwear.” 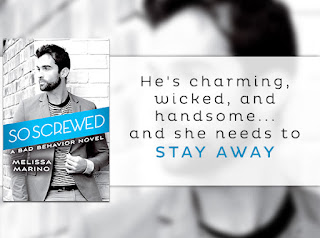 Melissa Marino is a full-time writer and part-time Storm Trooper collector. When she's not writing, you can find her watching Friends reruns, mastering her cupcake frosting swirl and hunting for the perfect red lipstick. Melissa lives in Chicago with her husband, son and very opinionated dachshund.

Add So Screwed to your shelf on Goodreads