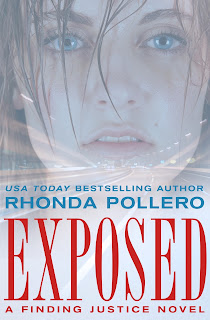 After a whirlwind romance, Darby Hayes Grisom married the man of her dreams. Smart, handsome, ambitious-Sean was everything she always thought she wanted. Little did she know that one year later that dream would turn into her worst nightmare. Sean is moody, angry, violent. Violent enough to kill. When Darby realizes she's pregnant she knows Sean will never let her go.

Attorney Jack Kavanaugh is the only person Darby can trust to help her with her plan to save herself and her baby. But the deeper Jack gets involved in protecting Darby, the deeper the feelings between them become. A complication Darby can't afford-because her husband is watching their every move and he'll do anything to get her-and their baby-back.

“Let’s step into the hallway,” Sean suggested, placing his arm around the shoulder of the officer, guiding him out of the room.
Darby slammed her head against the pillow and again hot tears welled in her eyes. Grabbing the call button, she pressed it over and over until a petite and clearly irritated nurse entered the room. In the split second the curtain was drawn back, Darby saw Sean and the sergeant sharing a handshake.
“Yes?” the nurse asked as she gave cursory glances to the machines tethering Darby to the bed.
“I need a phone.”
“We don’t allow telephones in the rooms. Is there someone I can call for you?”
“Yes. I need the police.”
The nurse blinked, then peered back over her shoulder as she pushed apart the curtain. “Officer?”
“Not him,” Darby cried. Too late.
Sean and the officer returned. It didn’t take a rocket scientist to see that the sergeant was totally charmed by Sean. The sergeant took up a position at the end of her bed next to the nurse while Sean moved to the head and draped his arm around her shoulders. “I was just explaining your condition to the policeman.” His fingers dug into the flesh at her shoulder.
Ciminelli smiled understandingly. “I’ve got three kids myself. My wife went a little hormonal with each one. She had all sorts of weird thoughts and cravings. Got so I was afraid to walk in the door after my shift. Never knew what was going to set her off.”
“Darby’s normally very rational,” Sean said, brushing a kiss to her temple. “Don’t you have something to say to the officer, sweetheart?”
Darby pressed her lips tight.
Sean squeezed her shoulder harder. “Darby, the officer checked. He spoke directly with Roxanne.”
“Roxanne would lie for you,” she whispered under her breath.
Sean sighed heavily. “Sweetheart, I thought you might still be…confused, so I made sure the officer called the airline to verify that I was on the flight. The hotel verified that I checked in and even told the officer what I ordered from room service and when it was delivered. The investor I was meeting as well as the restaurant staff verified that I attended the meeting. So, don’t you think it’s time for you to apologize to the officer for making extra work for him?”
Darby had no idea how he had managed it, but he had. Now she looked like the crazy one. And worse yet, she was at Sean’s mercy, which was a terrifying thought. What would happen once they were alone? She shivered just thinking about the potential punishment for calling him a murderer in public. She had that trapped animal feeling again and she couldn’t stop crying. No one believed her but she didn’t know how he’d pulled it off; she just knew he had. Just as she knew the officer wasn’t going to believe a word she said. Darby felt defeated. She gave up. “I’m sorry.”
“Don’t give it a thought, Mrs. Grisom. I know it was just the grief and the hormones talking. I gave your husband everything you’ll need to make the, um, final arrangements for your parents.”
“Thank you.”
The nurse followed Ciminelli out of the room. Darby braced herself, fully expecting to suffer the wrath of Sean. Instead, he was just looking at her as he arranged the hair framing her face.
“I’m sorry, sweetheart. I always liked your parents,” he whispered against her ear.
“Ummmm.”
Then calmly and quietly he added, “If you hadn’t called them, I never would have been forced to kill them.”

After selling her first romantic suspense in 1993, Rhonda Pollero has penned more than 30 novels, won numerous awards and nominations, and landed on multiple bestseller lists, including USA Today, Bookscan, and Ingram’s Top 50 List. She lives in south Florida with her family.


Add Exposed to your shelf on Goodreads 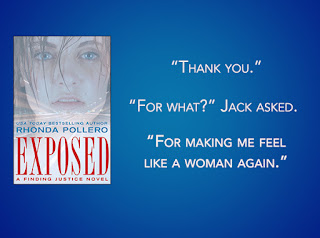 Enter to win 1 of 15 free ebook downloads of Exposed!
http://bit.ly/2hkAGGj