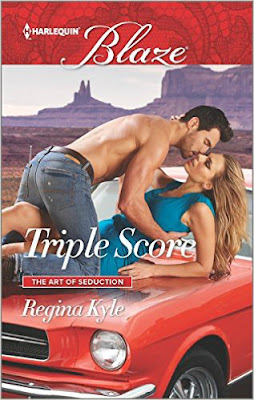 Prima ballerina Noelle Nelson needs to recover from her injury and return to the stage. She won't consider failure…or be distracted by baseball's resident bad boy, Jace Monroe. His tattoos, wicked smile and deliciously athletic body might drive her crazy, but a media frenzy is the last thing this good girl needs.

Jace is sick with fear that his own injury will never heal, but he's not about to let anyone notice, especially the gorgeous blonde dancer he loves to infuriate. He's pushing himself past his physical capacity, putting his future at risk. Still, when it comes to making a play for Noelle, Jace is in scoring position—and he's not going to back down!

Jace ended the call, returned the weight to its place on the rack and headed back to his room. Once inside, he flipped on the light switch and stared, open-mouthed.

The bed had been empty when he left to meet Sara. Now one of those inflatable love dolls lay sprawled on top, her cherry-tipped breasts pointed straight up at the ceiling and her ruby red mouth in a permanent O. A cardboard box sat between her open legs. On one side, the words For Your Enjoyment: Handle With Care were printed in bold, bright blue marker. No return address, but the postmark was from Chicago, where the Storm had finished up a recent road trip.

Jace flicked open the utility knife on his key chain, sliced through the packing tape and began pulling out items one by one. A box of condoms. A tube of Astroglide. He kept digging. The damn thing was packed with enough sex toys to keep a rowdy bachelorette party whooping it up for hours.

Cooper and Reid’s warped idea of a care package. They’d probably paid some gullible orderly a fortune to do their dirty work. Or maybe offered him box seats the next time the Storm were in Phoenix.

The corners of Jace’s lips curled into a smile in spite of himself. It was funny. Though God only knew what the staff would think when they came to clean in the morning.

He started chucking stuff back in the box until all that was left was the doll. No way was she going to fit, not in her present state. And he sure as hell wasn’t leaving her like that. With a sigh, Jace opened the valve.

He picked up the doll and squeezed it. A long, slow whoosh of air escaped from the valve. He squeezed again. “Come on, baby. Give it to me.”

A shrill, female squeak from behind him made Jace turn toward the door, the doll still in his arms.

“Sorry.” Noelle leaned against the door jamb, almost as if her crutches weren’t enough to keep her vertical. Her porcelain cheeks tinted red. “Again.”

“Back for some more covert operations?” Jace loosened his hold on the doll. “Has anyone ever told you your timing sucks?”

“Maybe it’s not my timing.” Her eyes traveled from him to the doll and back again. “Maybe it’s your…libido.”

“Very funny.” He smiled in spite of himself. She was smart, sassy and not in the least bit intimidated by his tattoos or his attitude or his fame, like so many women. “You know there was nothing going on between me and Sara.”

“That doesn’t explain you and…” She wagged a finger at the doll. “…her.”

“A practical joke from a couple of friends.”

He threw the doll onto the floor and stepped on it, squashing one plastic boob. The air came out in a hiss, and he continued to flatten the doll with his feet.

He raised an eyebrow. “Do I look like I care?”

“Like I said, I’ve never been that hard up for female companionship. And I don’t plan to start now.”

“From the way things looked a minute ago, you could have fooled me.”

He stopped his rhythmic stomping to stare at her. “Was there a reason for this late-night visit? Couldn’t sleep? Lonely? Miss me, maybe?”

Her face flushed an ever deeper scarlet. “Sara said I should apologize for spying on you guys.”

He rolled his eyes. “Not much of an apology if she’s making you do it.”

“Well?” He folded his arms across his chest.

“I’m waiting.” She narrowed her eyes at him, and he tilted his head. “For your apology.”

“You really are the most infuriating man.” Her lower lip jutted out into a pout that he shouldn’t have found so sexy.

“I’ve heard.” He shrugged. “Many times. But I’m not that one who has something to apologize for.”

“Hardly.” He picked up the deflated doll, stuffed it into the box and closed the lid before she could get a glimpse of any of the other goodies inside. “But it’ll do. For now.”

“Forever,” she countered as she turned to leave. “I’m here to get back on my feet, not make friends.”

“We’ll see about that, Duchess.” He frowned, realizing he still didn’t know her damn name, and watched, transfixed by the swaying of her perfect ass as she disappeared out the door. The squeak of her crutches on the linoleum of the hallway echoed in her wake. “We’ll see.” 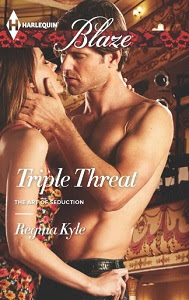 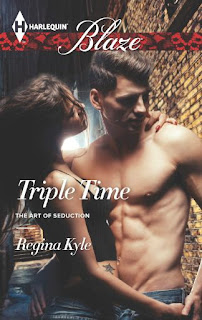 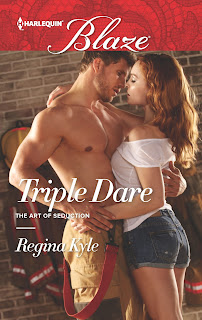 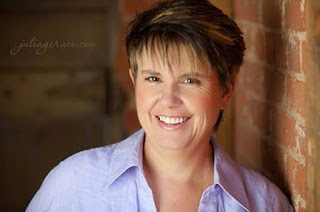 Regina Kyle knew she was destined to be an author when she won a writing contest at age ten with a touching tale about a squirrel and a nut pie. By day, she writes dry legal briefs, representing the state in criminal appeals. At night, she writes steamy romance with heart and humor.

A lover of all things theatrical, Regina lives on the Connecticut coast with her husband, teenage daughter and two melodramatic cats. When she’s not writing, she’s most likely singing, reading, cooking or watching bad reality television. She’s a member of Romance Writers of America and of her local RWA chapter.