Guest Post & Giveaway: The Virgin and the Viscount by Charis Michaels 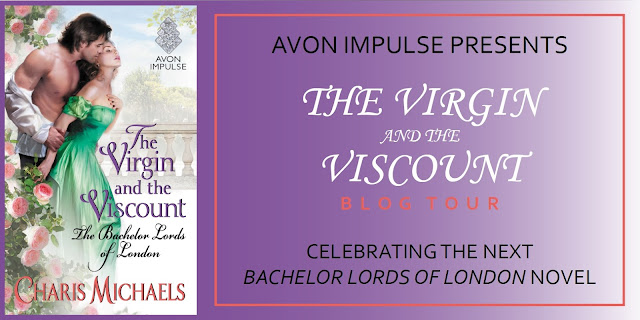 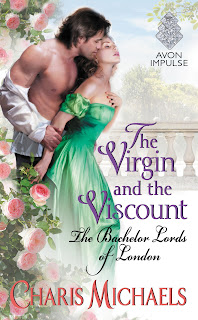 In the next sparkling romance in debut author Charis Michael’s Bachelor Lords of London series, a proper viscount meets his match in a beguiling virgin who can't help but break all the rules.

Lady Elisabeth Hamilton-Baythes has a painful secret. At the innocent age of fifteen, she was abducted by highwaymen and sold to a brothel. After two days, a young lord discovers her and enacts a brave rescue to get her out. Now she's a grown woman, working to save other girls from the horror she saw that night and never forgetting the young man who rescued her.

Bryson Courtland, Viscount Rainsleigh has overcome an abusive boyhood, neglectful parents, and a bankrupt title to be one of the wealthiest noblemen in Britain. He works tirelessly to be upright and forthright and proper to a fault. Now he requires only one thing: A proper, forthright, proper wife.

When a charity event puts Lord Bryson and Lady Elisabeth face-to-face, Bryson has no memory of the wounded girl of long ago. All he can see is a perfect candidate to be his future wife. Elisabeth has never forgotten him, but she worries that the brave boy who saved her so long ago has become a rich man with an unfulfilled life.

As a whirlwind courtship reveals the truth, Bryson must accept that Elisabeth is actually a shadow from his dark past, while Elisabeth must show that love is the noblest virtue of all.

On April 12, 1809, Franklin “Frankie” Courtland, 6th Viscount Rainsleigh, tripped on a root in the bottom of a riverbed and drowned.  He was drunk at the time, picnicking with friends on the banks of the River Wylye.  According an account later given to the magistrate, his lordship simply fell over, bumped into a fallen log, and sank.
It was there he remained—“enjoying the cool,” or so his friends believed—until he became too heavy, too slippery, and, alas, too dead to revive.  But they did dislodge him; and after that, they claimed he floated to the surface, bobbed several times, and then gently glided downstream.  He was later found just before sunset, face down and bloated (in life, as also in death), beached on a pebble shoal near Codford.
At the time the elder Courtland was sinking to the bottom of the river, his son and heir, Bryson was hunched over a desk in the offices of his fledgling shipping company, waiting for the very moment his father would die.  It had been an exceedingly long, progressively humiliating wait.  Years long—nay, decades.
Luckily for Bryson, for his ships and his future, he was capable of doing more things at once than wait, and while his father drank and debauched his way through all respectability and life, Bryson worked.
It was an unthinkable thing for a young heir and nobleman—to “work”—but Bryson was given little choice, considering the impoverished state of the Rainsleigh crest.  He was scarcely eleven years of age when he made first foray into labor, and not so many years after, into private enterprise.  His life in work had not ceased since.  On the rare occasion that he didn’t work, he studied.
With his meager earnings (he began by punting boats on the very river in which his father later drowned), he made meager investments.  These investments reaped small gains—first in shares in the punting station; later in property along the water; later still, in other industry up and down the river.
Bryon lived modestly, worked ceaselessly, and spared only enough to pay his way through Cambridge, bring up his brother, and see him educated him, as well.   Every guinea earned was reinvested.  He repeated the process again and again, a little less meagerly each time ‘round.
By the time the elder viscount’s self-destructive lifestyle wrought his river- and drink-soaked end, Bryson had managed to accrue a small fortune, launch a company that built and sailed ships, and construct an elaborate plan for what he would do when his father finally cocked up his toes and died.
When at last that day came, Bryson had but one complaint: it took fifty-two hours for the constable to find him.  He was a viscount for two days before anyone, including himself, even knew it.
But two days was a trifle compared to a lifetime of waiting.  And on the day he learned of his inheritance—nay, the very hour—he launched his long awaited plan.
By three o’clock on the fourth day, he’d razed the rotting, reeking east wing of the family estate in Wiltshire to the ground.
Within the week, he’d extracted his mother from the west wing and shipped her and a contingent of discreet caregivers to a villa in Spain.
Within the month, he’d sold every stick of furniture, every remaining fork and dish, every sweat-soaked toga and opium-tinged gown.  He burned the drapes, burned the rugs, burned the tapestries.  He delivered the half-starved horses and the fighting dogs to an agricultural college and pensioned off the remaining staff.
By the six-week mark, he’d unloaded the London townhome—sold at auction to the highest bidder—and with it, the broken-down carriage, his father’s dusty arsenal, what was left of the wine stores, and all the lurid art.
It was a whirlwind evacuation, a gutting, really, and no one among polite society had ever witnessed a son or heir take such absolute control and haul away so much family or property quite so fast.
But no one among polite society was acquainted with Bryson Anders Courtland, the new Viscount Rainsleigh.
And no one understood that it was not so much an ending as it was an entirely fresh start.  Once the tearing down ceased, the rebuilding could begin. New viscountsy, new money, new respect, new life.
It was an enterprise into which Bryson threw himself like no other. Unlike all others, however, he could only do so much, one man, alone. For this, he would require another.  A partner.   Someone with whom he could work together towards a common goal.  A collaborator who emulated his precise, immaculate manner. A matriarch, discreet and pure. A paragon of propriety.  A viscountess.  A proper, perfect wife.

Crafting a Book Title with a Title:  How The Virgin and the Viscount Got Its Name

The Virgin and the Viscount was the very first romance manuscript I ever wrote, way back in 2004, twelve years before it would reach the hands of readers.
Back then, it had a working title of, A Proper Scandal.
Back then, it was not connected to another book like it is now.
Back then it was double the word count.
After I finished the first draft, it languished with its old title and original length until I was able to revise it into my Bachelor Lords of London series.  To my delight, the revisions came easily, almost as if it belonged in the series from conception. Characters were combined.  Chapters were cut. My writing became more succinct.
What did not come as easily was giving the book a new title.
When an author names a work of commercial fiction like romance, she has the challenge of making quite a lot of people happy.  Herself (obviously), her editor, the editors above her editor, the marketing and publicity teams, her readers, and simply the trending Zeitgeist.
But before I could please everyone, I had to think series, I had to think “Bachelor Lords,” I had to make this book fit with the book before it, The Earl Next Door.
Since Book I in the series contains the aristocratic title “Earl,” we felt second book should hit on the hero in general and mention his rank particular.
Ha! Easier said than done….Here, I share with you a very few of my many, many rejected false starts:
The Stone-Cold Viscount, The Viscount’s Vow, The Viscount’s Vice, The Viscount’s Only Vice, The Viscount Takes a Vice, Unraveling the Viscount or The Viscount Unraveled.
When these were all rejected and I was pulling my hair, I sent up:
Stand and Viscount-ed,  Down for the Viscount (personal favorite worst of the worst), Where the Viscount Ends, or Viscount on the Verge.
And finally (pathetically):  Don’t Viscount the Chickens Before They Hatch, which is what I felt I had done by writing this book into the series without deciding on a viable name at the onset.
Alas, we all know a title emerged and the book is called The Virgin and the Viscount.  To arrive at this, I finally caught on to what my publisher seemed to want, the perfect balance of little bit sexy + a little bit catchy.
I began to search words that began with “V” (for the catchy) that might also be provocative (for the sexy).  When I stumbled on “Virgin,” I thought, fingers crossed, I might I might have a winner—and I was right.  I got the thumbs-up from my publisher, my writing buddies, and I even felt like my characters would approve.
Now, ahem, if I can only convince my mother.

Charis Michaels is thrilled to be making her debut with Avon Impulse. Prior to writing romance, she studied Journalism at Texas A&M and managed PR for a trade association. She has also worked as a tour guide at Disney World, harvested peaches on her family’s farm, and entertained children as the “Story Godmother” at birthday parties. She has lived in Texas, Florida, and London, England. She now makes her home in the Washington, D.C.-metro area.