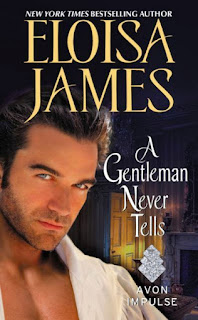 A witty, sexy novella about a virgin widow and a rake with something to prove.

Eighteen years ago (give or take a few) the Honorable Oliver Berwick blackened his own soul, leaving him hardened and resolutely single.

When the chance for redemption in the form of a country house party invitation comes his way, Oliver is determined to prove himself a gentleman.


Until he breaks all the codes of gentlemanly behavior…once again.

ELOISA JAMES is a New York Times best-selling author and professor of English literature who lives with her family in New York, but can sometimes be found in Paris or Italy. She is the mother of two and, in a particularly delicious irony for a romance writer, is married to a genuine Italian knight. Visit her at www.eloisajames.com