Book Club Thursday: "Catching Up On"

This week we are doing our... 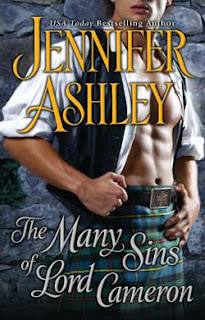 
Lord Cameron Mackenzie is intrigued when he finds the pretty widow, Ainsley Douglas, hiding in the window seat of his bedchamber. Cam remembers Ainsley Douglas all right—six years ago, he’d caught her in this very bedchamber, during a house party in the Mackenzies’ Scottish manor. Enchanted by her ingenuous excuses, he decided to seduce her, but stopped shy when she’d made a rather touching appeal about her “good husband who didn’t deserve to be heartbroken.”

Later, Cameron learned that her visit to his bedchamber was part of some female intrigue against him, the kind his late wife used to practice. Ainsley protested her innocence, but Cameron’s anger made him never want to see her again. Now she’s back, at another houseparty—and Cameron finds the gray-eyed minx in his bedchamber, again. Her excuses are just as ingenuous, but this time Cameron is determined to teach her a lesson.

They have unfinished business, Cameron tells her. He asks her how many of her many buttons she’ll let him unclasp, promising that before the houseparty is over, she’ll be asking him to undo them all.

Ainsley’s dismay is real. She’s on a mission to prevent embarrassment to Queen Victoria, and time is running out. Though the needs he’d stirred long ago during her unhappy marriage rise again, she knows it would be foolish to fall for love-them-and-leave-them Cameron Mackenzie.

But he asks her a question that challenges her beliefs about love and happiness, and she finds herself risking all to be with the black sheep of the Mackenzie family.

How do I always let myself get behind on authors that I really enjoy reading? I have no clue. Now don't get me wrong, I'm not behind on everything of Ashley's, just her historical's.

I'm going to try my best to catch up with her. I'm not going to hold my breathe though. Sure, I'll get caught up, when of course is the issue.

Enough of that. On to my review...

I really enjoyed The Many Sins of Lord Cameron. Shocking I know. It has the characters that I love from the series and a few new ones. I've been waiting for Cameron's book since The Madness of Lord Ian Mackenzie (my favorite Mackenzie). I have a soft spot for fathers that are raising their children alone.

From book one you realize that life wasn't easy for the Mackenzie boys. They went through hell and came out the other side with a ton of issues. Cameron unfortunately found love where it wasn't and soon found himself raising his son Daniel alone. Or as alone as one could be in this family.

You will love the interaction between Cameron and Ainsley. She is very good for him and Daniel. She completes them. Of course their road to happiness isn't a easy or smooth one. Lots of ups and downs but they make it.

I had a wonderful time with the Mackenzie's and can't wait to visit with them again. If you haven't yet tried Ashley's historical's you don't know what you are missing!

If you've read The Many Sins of Lord Cameron or any other books by Jennifer Ashley I'd love to hear your thoughts. Thanks for visiting with me and happy reading!

The Many Faces of Romance: Karen