Release Blitz & Giveaway: A Summer to Remember by Marilyn Pappano 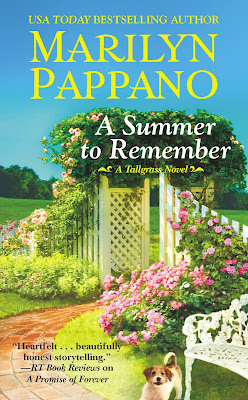 It's been a long time since widow Fia Thomas felt the spark of physical attraction. But from the moment she meets Elliot Ross one stormy night, she yearns for a fresh start, for him to make her feel whole and well again. With his broad shoulders and a warm smile crinkling his dark eyes, he could finally offer her the solace she's been seeking. And she's willing to give him anything in return . . . except a promise that could break his heart.

Now that Elliot is out of the Army, he's looking for a place to call home. Tallgrass was just a stop to stretch his legs, yet one look at Fia halts him in his tracks. In her sweet, sassy company, he finds the soul mate he never thought he'd have. But Fia is holding something back-something that keeps her from making any plans. Elliot's new mission: gain Fia's trust...and convince her that summer's end can mean a new beginning.

He did, and she listened with her eyes half closed. The tones were sweet, the emotion fierce, the quality hands-down better than the singer on the radio. Everything she learned about Elliot was adding up to an extraordinary man.

While she remained plain, average Fia. With “issues.”

“Beautiful,” she responded when the song ended. At about the same time, he turned into her driveway.

He came around and held hands with her to the stoop and up the steps, where he propped open the storm door with his boot while she unlocked the door. She set her purse on the floor inside the door, then faced him. “I’m not going to invite you inside because you’ve got to get up early.”

“Darn.” He moved a step closer, fitted his hands to her waist, and leaned toward her. She met him in the kiss, her mouth parting, her hands sliding around to the back of his neck, combing through his silky hair. Dear Lord, she’d forgotten how good a kiss could be. She nibbled at his lip, pausing only when his tongue thrust between her teeth, invading, exploring, rousing a long-unsatisfied need deep inside. Moving intuitively, her hands glided over soft cotton that covered the lean muscles along his spine. When they reached the rougher texture of jeans and leather belt, the tips tingled, like the briefest touch of a live wire, singeing and searing and sparking pleasure through her body.

When she stroked a few inches lower to slide her palm over his erection, his breath caught, and so did hers. It had been so very long . . .would be so very easy . . . back up one step, don’t let go, take him to the bedroom or, better, the couch, strip off their clothes . . .So easy. So perfect. So wrong.

Even the thought of that last word was wrong. It jangled in the midst of nerves humming with need. It pulled her out of the haze of what she could do, of the incredible satisfaction she could have, and brought back all the ugly uncertainty of her life. Elliot might be Prince Charming, but she was no princess, and her life was no simple, sweet fairy tale with a happily ever after.

Tears seeped into her eyes—disappointment, weariness—and she opened her eyes to blink them away. Apparently sensing the change in her, Elliot ended the kiss with another tiny, sweeter kiss, then clasped her hands in his. For a long time, he studied her face with an intensity that rippled along her skin, then he took a step back, putting breathing room between them.

When he spoke, he sounded as if he’d done a long hump with a heavy ruck on a hot day. “You never did tell me.”

“Is Fia short for something?”

“You never did ask.” She didn’t sound much better. “Sofia.”

He laid his palm gently against her cheek, repeated her name, then backed away even farther. “Thank you, Sofia.”

“Being in that parking lot Friday night. For liking me and my dog. For kissing like—” Breaking off, he grinned and shook his head. “Damn.”

Leaning against the door jamb, she watched him go to his truck, get in, and drive away with a final wave. Sighing deeply, she stepped inside the house, closed and locked the door, and stumbled, hitting the floor with a solid thud. Known for her intensely emotional stories, Marilyn Pappano is the USA Today  bestselling author of nearly eighty books. She has made regular appearances on bestseller lists and has received recognition for her work in the form of numerous awards. Though her husband's Navy career took them across the United States, he and Ms. Pappano now live in Oklahoma high on a hill that overlooks her hometown. They have one son and daughter-in-law, an adorable grandson, and a pack of mischievous dogs.