Today we are doing one of our three "Other Reviews" We each will be able to pick one book to read together and review. I picked Recipe For Kisses by Michelle Major. Not only will we be reviewing this book together, we will also be giving it away. 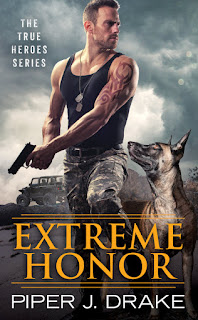 David Cruz is good at two things: war and training dogs. The ex-soldier’s toughest case is Atlas, a Belgian Malinois whose handler died in combat. Nobody at Hope’s Crossing kennel can break through the animal’s grief. That is, until dog whisperer Evelyn Jones walks into the facility . . . and into Atlas’s heart. David hates to admit that the curvy blonde’s mesmerizing effect isn’t limited to canines. But when Lyn’s work with Atlas puts her in danger, David will do anything to protect her.

Lyn realizes that David’s own battle scars make him uniquely qualified for his job as a trainer. Tough as nails yet gentle when it counts, he’s gotten closer to Atlas than anyone else—and he’s willing to put his hard-wired suspicion aside to let her do the same. But someone desperate enough to kill doesn’t want Lyn working with Atlas. Now only teamwork, trust, and courage can save two troubled hearts and the dog who loves them both . . .

In the last few years I haven't been reading as much romantic suspense as I used to. I just couldn't do it. I think I had burnt myself out on them. I also did it for historical's and paranormal's too.

Just this year I have been getting back into them. Yes, for the blog I have read some and really enjoyed them, but they didn't really call to me.

Since we changed our Book Club Thursday posts for this year we aren't doing as many group reviews so I really like doing them when we do. For this group review we are doing is Extreme Honor by Piper J. Drake.

I have to say that I just jumped right into this story and ran with it. I really enjoyed it that much. David is such a great guy. He might not have been happy having Lyn on the team, but once she was he treated her so good.

Lyn in the beginning wasn't my cup of tea, she came off bitchy but I soon realized that it was becasue of how uncomfortable she was feeling. I soon found out that I liked her. I also felt sorry for her, she has some family crap she's dealing with. David too. In fact his family shit pissed me off!

What I really love about Extreme Honor was how both Lyn and David come together over the caring of one dog, Atlas. In fact Atlas is one of my favorite characters in the Book. You feel so bad for him and want him to be happy.

You'll also like the little twist at the end. It gives you one of those moments. One thing I wish the author had done more of was let you get to know a little bit more about Rojas & Forte. With Rojas story next I would made for a richer story.

This is a great start to a new series and I'm looking forward to reading, Ultimate Courage who is Rojas story. It's out on July 26th

If you've read Extreme Honor or anything else by Piper J. Drake I'd love to hear your thoughts. Thanks for visiting and happy reading!

Born to Read Books: Cyndi  | The Many Faces of Romance: Karen