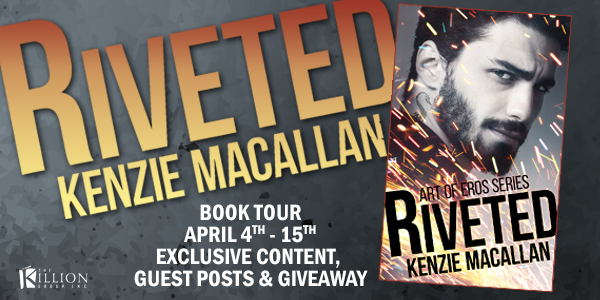 RIVETED by Kenzie Macallan is the debut novel in the Art of Eros romantic suspense series. This suspenseful, sexy, soulful tale is filled to the brim with action, romance, and a mystery that will make you hold your breath from beginning to conclusion. If you like stories that revv up your heartrate, you’ve found a pulse-pounder in RIVETED. 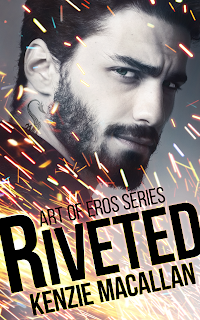 For years Marabella built a wall to protect herself from the pain. She has a secret about her dead husband that she would prefer not to share. Mac has his own secret but wants to know everything about her. As they play in paradise, someone is watching and waiting. Can Mac get to Marabella before her past catches up with her?

She had affected him on every level, in every way, with her words, smile and body. He couldn't stay still, torn between keeping his distance and wanting to show her exactly how he wanted her. He didn't do dating. No strings attached, friends with benefits, always the safest bet. Obviously, Marabella wasn't that type of woman and his pull toward her scared the hell out of him. All bets were off.

Romancing the Readers thanks Kenzie Macallan for stopping by and visiting with us!

What did you have to overcome as a first time author?

I had to overcome a lot of different things. I learned that I am somewhat of a perfectionist but I had to put some of that aside to get the book out there. Otherwise, I could be editing it forever. Even now, I can pick up the paperback and see all the things I want to change about it! Eek! During the editing process, I learned to put my pride away. It was a “suck it up Buttercup” moment. Ten drafts later, I learned an incredible amount about the writing process.

A book is never written by one person. It takes a team of honest people who will deal straight with you. I have some amazing writers in my group who did a great job of “getting real” about some of the content in the book. They shifted through some of it and gave valuable feedback that I will use forever. Beta readers were also crucial to the process; helping to mold what was there into something even better from a reader’s perspective.

I needed to learn the art of how to promote myself, which isn’t the easiest thing in the world to do. If I were a super model, it’s pretty obvious what I would be promoting. As an author, I tend to keep to myself and let the words do the talking. It’s hard for writers to come out of their shells and reflect on who they are and the piece they have created for readers. Social media plays a huge role in all of this, knowing what outlets are the best for reaching readers who would be interested in my story.

Lastly, I needed to have vision. Putting together a cover takes working with the right person and having them understand what I was trying to get readers to visualize. It’s a lot of give and take. In the end, the graphic designer hit the mark.

My most important lesson was that passion gives me drive. Being a writer is a full time job and one I take quite seriously with an appetite to keep writing. When these stories make themselves known, you feel compelled to write them and to keep at it until it’s done. As any artist knows, sometimes a piece is never done but you have to let it go.

I live in the Northeast with my two dogs who keep me very busy. As a child I traveled around the world to places like Africa, Greece, Italy, France, Holland and England. My favorite country is Scotland and hope to go back someday. I love to take photos of flowers and paint portraits, mostly of children. When I'm not writing, I'm reading all kinds of romance novels.

Join Kenzie Macallan and the Killion Group as we celebrate the release of Riveted with this 21 stop Book Tour from April 4th to 15th. Included in this book tour is exclusive content, guest posts from Kenzie, book reviews, a spotlight of the book, and a giveaway. One GRAND PRIZE WINNER will receive a $25 Amazon Gift Card!

Once Untold
Romancing the Readers

T&L Book Reviews
Underneath the Covers