Today we are doing out "Catching Up On" post!

This month we are doing... 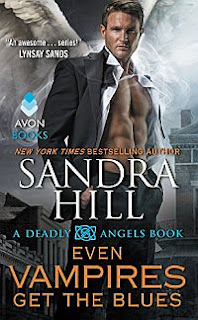 The fact that vampire angel Harek Sigurdsson was a Norseman in his mortal life doesn’t make thawing out after exile in Siberia any easier. But things heat up when his search for evil Lucipires connects him with Camille Dumaine, a human who thrums with sensual energy that can mean only one thing: she’s the mate Harek’s been seeking for centuries . . .

The SEALs call her “Camo” for her ability to blend into a crowd—yet Harek’s intense blue gaze singles Camille out like a white-hot spotlight. The security wiz was hired to help bring down a ruthless band of international kidnappers, but Camille senses an unspoken agenda—besides Harek’s bold declaration that she’s his "destiny." Just Camille’s luck that the sexiest man she’s ever met may also be . . . a vampire!

I don't know how I got behind on one of my favorite authors...but I did. My only excuse is that I have a ton of books to read and I'm only one person.

But as you can see I'm trying my best to catch up!

If you haven't yet read any of the Deadly Angel series you don't know what you're missing. Sandra Hill has the ability to mix tons of humor with a complex story. She gives you great characters that make you want to come back time after time.

Up this time is Harek who suffers from "greed" he wants everything! On his way to a vast fortune he did some crappy things. To pay for his sins he becomes a vampire-angel.

Cool, right!!!! The vampire-angel part, not the sins.

What a great twist to a tired genre. I'm not saying that all vampire romances are a thing of the past because I still enjoy some great series, I just feel its something very played out. For me that is. Because I'm a little tired of it I love the idea of the vampire-angels.

But since Harek sins are many, it will take someone special to deal with him, (he's only reformed so much) and I think he found the perfect person in Camille. She's tough and takes no shit from anyone, but she's also soft enough to want love. Okay, maybe she wasn't sure about that in the beginning but Harek grew on her.

I think you'll love their story. Hill packs so much into Even Vampires Get The Blues. I will tell you that it would be better for you to start at the beginning of this series and work you way to this book. I think you'll like them much better that way.

If you've read Even Vampires Get The Blues or any other book by Sandra Hill I'd love to hear your thoughts. Thanks for visiting and happy reading!

The Many Faces of Romance: Karen

Labels: Avon Book Club Thursday Catching Up On Review Sandra Hill The Deadly Angels The Many Faces of Romance