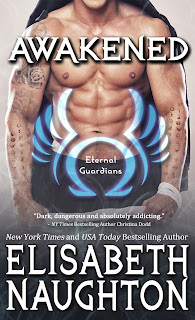 DAMON – For twenty-five years he’s served as a plaything for the gods. With no memory of his past, he has no way of knowing if this is his ultimate fate, but he senses there has to be more to life. Damon’s hope for more comes in the form of the Sirens’ newest recruit. Elysia is unlike any trainee he’s ever met. Not only can she remember where she came from—an ability the Sirens block—but she has an instant connection to Damon, one he’s never felt and doesn’t understand. Soon Damon is willing to do anything to have Elysia. Even risk the wrath of the gods to break her out of Olympus so he can keep her for himself. But Damon’s past isn’t a mystery to everyone. Evil forces are at work beneath the surface, and before long, Damon realizes that the connection he shares with Elysia isn’t a random coincidence. His fate—and the darkness it brings—was cemented long ago. And when it is finally revealed, no one will be safe. AWAKENED can be read as a stand-alone book.

“Mm…” Aphrodite swung her long legs over the side of the enormous bed and stretched her arms above her head. “That was wonderful.” Curly auburn hair the color of autumn leaves spilled down the pale skin of her naked spine as she turned and cast a coy look over her shoulder. “You get better and better, Damianos.”

The two naked nymphs who’d joined them scurried off the bed and rushed out of the room. Aphrodite pushed to her feet, all long lines and perfect curves, and crossed to the chaise.

The nymphs could disappear after the fact, the lucky females, but Damon could not. Rolling to his side, he propped his elbow on the mattress and rested his head on his hand as he watched Aphrodite slide a white silk robe onto her pale arms and tried not to be resentful of that fact. “Good thing, since my purpose is only to serve.”

Aphrodite smirked. “And you do it so well, erastis.”

Lover. He hated the way that word sounded.

The goddess moved back to the edge of the mattress and sat, then reached out and twirled a lock of Damon’s hair around her finger. “Speaking of serving, a new class of Sirens is set to arrive.” She pushed out her full, plump lips in a sexy little pout. “Athena is going to try to steal you from me again.”

Damon looked up at the goddess of love and desire and tried to feign disappointment, though inside, excitement leapt at the possibility of a break. Aphrodite’s temple wasn’t a bad place to spend your days—wide soaring rooms, tall stately pillars, marble everything, fountains and baths that promised both pleasure and relaxation, and the sweet scent of heliotrope wafting on the air, awakening the senses. But lately he couldn’t help thinking there had to be more to life than this. More than meaningless pleasure. More than casual sex. More than catering to Aphrodite, a goddess who cared only about herself.

“A new class, huh?” He rolled back into the mountain of pillows and laced his fingers behind his head, remembering that Athena and Aphrodite didn’t always get along. Jealousy was forever an issue between them—between any of the ruling Olympians—and he’d learned long ago not to show interest in any immortal other than the one currently in his line of sight.

“You don’t want to go, do you?” Aphrodite slid her finger down his throat and across the dusting of hair on his bare chest. “I could tell Athena you’re too valuable, which you are.”

This was where he needed to be careful. He couldn’t show too much enthusiasm, or Aphrodite would never let him leave. “Of course not. Training new Sirens is as enjoyable for me as spending time with your husband is for you.”

Aphrodite’s lips curled. Everyone knew she couldn’t stand her husband, Hephaestus. Her gaze hovered on Damon’s face. “That boring?”

She was beautiful, even Damon couldn’t deny that. Meadow-green eyes, flawless skin, high cheekbones, and lips made only for seduction. But though physically he was still attracted to her, more and more lately, he was finding it difficult to be aroused in her company. Sex with Aphrodite was as empty as his life these days. There had to be more. A reason he was here. A future that held some kind of purpose. Something other than…immortal perfection.

He drew his hand from behind his head and brushed the back of his fingers against the smooth curve of her jawline. “Infinitely boring. When I’m with the Sirens, I count the days until I return to your temple.”

Which was a flat-out lie. Working with Athena’s Sirens, training them in combat, strategy, warfare—even seduction—was a thousand times more fun than being stuck in Aphrodite’s claustrophobic pleasure palace.

Aphrodite sighed and smoothed her hand over his chest again, dropping her gaze to where she touched him. “I suppose I could consider letting you go. So long as I know you’re pining away for me. Absence, they say, does make the heart grow fonder.”

Damon had never found that to be true, but he refrained from saying so. He wasn’t about to do anything to jeopardize this chance to escape, however short his respite might be. “It does. Very much so.”

She leaned down and kissed him, sliding her tongue along his at the first touch and tasting him deeply. He didn’t pull away, didn’t say no, knew it was pointless to do so. Instead, he slid his fingers into the curly mass of auburn hair framing her face and kissed her back. Her mouth turned greedy against his, and she wriggled out of the robe she’d just pulled on, then pushed the sheet from his hips.

Yeah, there has to be more than this, he thought as she climbed over him. More than aphrodisiacs to keep him hard, more than meaningless sex, more than immortals using him for their pleasure. There had to be a hell of a lot more. Somewhere.
He just hoped he found it before he went mad.

Other books in the Eternal Guardians series:

Before topping multiple bestseller lists—including those of the New York Times, USA Today, and the Wall Street Journal—Elisabeth Naughton taught middle school science. A rabid reader, she soon discovered she had a knack for creating stories with a chemistry of their own. The spark turned to a flame, and Naughton now writes full-time. Besides topping bestseller lists, her books have been nominated for some of the industry’s most prestigious awards, such as the RITA® and Golden Heart Awards from Romance Writers of America, the Australian Romance Reader Awards, and the Golden Leaf Award. When not dreaming up new stories, Naughton can be found spending time with her husband and three children in their western Oregon home.