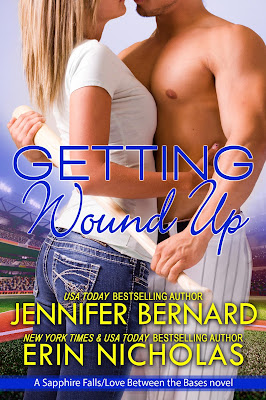 Caitlyn Murray has never let on that she's had fantasies about her brother's friend Eli Anderson for years. She'd do anything for the sexy baseball player who walked away from stardom to stay in Sapphire Falls and take care of his family. But she and Eli are friends. Just friends.

So when her brother hatches a plan to get Eli to the pro baseball try-out for the Kilby Catfish and another chance at his dream, Caitlyn is all in. After all, what's a little kidnapping among friends?

A spot on the pitcher's mound for the Catfish isn't the only tempting thing about the spontaneous road trip. Eli already knows that Caitlyn is as sweet as the candies she makes for the Sapphire Falls bakery, but alone with her overnight in the tiny motel room in Kansas, it's impossible to resist the urge to take a little taste.

But when that taste leads to falling for the girl next door just as his front door is moving hundreds of miles away, can Eli really have it all? Or do they have too many strikes against them?

At a Kansas City hotel on the night before the Eli’s tryout.

In the bathroom, Caitlyn took an extra-long time to get control of her nerves. This was silly. She’d spent the night in the same house as Eli back when they were kids. This was no different. Still, she bundled herself up into a pair of pink cupcake-print flannel pajamas that would have been more suitable for January in Nebraska than Kansas in July.

When she came out of the bathroom, she saw that Eli had had the same thought. He lay on his back wearing sweatpants and a Sapphire Falls Softball League t-shirt, the covers half on, half off. His arm lay across his eyes, as if he was trying to block the light—or maybe the sight of her. “You can turn off the light whenever you’re ready,” he told her.

She crawled into her bed, pulled the covers all the way to her chin, and turned off the light on the nightstand. “Good night.”

A hushed quiet fell over the darkened room. Too much quiet. The sound of Eli’s breathing made her too restless to sleep. She kept imagining his broad chest rising and falling, his long legs stretched all the way past the foot of the bed.

She tossed and turned, finally deciding it was simply too hot in the room for her favorite pajamas. Carefully, she reached under the covers and removed her pajama bottoms. She sighed, stretching out her legs and wiggling her toes. That was better.

She closed her eyes, then opened one when she heard rustling from Eli’s bed. Peering through the darkness, she saw a pale flash of fabric—he was dropping his t-shirt to the floor next to the bed.

He must have had the same idea. Now they were both half-dressed, and her heart was pounding in her throat. Did he know she’d also stripped down? Did he care? She waited, tense and quivering, for his next move.

He gave a soft snore.

God, she was stupid. Like he’d even notice if she stripped entirely naked and danced across the carpet.

Fine. She pulled off her pajama top. Underneath it, she wore a thin camisole—no wonder she was so hot. Why the heck had she overdressed to the point of suffocation? If Eli was going to be oblivious to her existence, she might as well be comfortable.

What the hell was Caitlyn doing? Trying to kill him? Was she now completely naked over there? He went hard as a rock at the thought. Damn. He wasn’t supposed to get a hard-on in the presence of his friend’s sister. But even her ridiculous fuzzy pink pj’s couldn’t hide those amazing curves, and he was only human. He shifted uncomfortably, the sweatpants rubbing against his cock. He usually slept naked, or at the most in his boxers. He felt suffocated by all that fabric.

This was never going to work. He listened to make sure Caitlyn was asleep, and when he didn’t hear any sound from her direction, he slid off his sweatpants and dropped them on top of his shirt. Ahhhh, that was better. Maybe now he had a chance of catching some zzzz’s before the main event tomorrow.

As long as he didn’t think too much about Caitlyn over there naked, her nightclothes in a little pile by her bed, just like his. It was kind of funny, if you thought about it.

Smiling, he drifted off.

In the middle of the night, the urge to visit the bathroom dragged him from a deep sleep. Blinking in the darkness, he stumbled out of bed. Still mostly asleep, he made his way across the room toward the bathroom. He yawned hugely, reaching for the door …

Only to find his arms full of warm, naked flesh. Female flesh.

Arousal ripped through him, and he dragged the tempting armful closer against his chest. He buried his nose in soft hair, ran his hands down curves that cried out to be touched.

His cock rose again, twice as hard as before. The woman in his arms trembled, pressed her hips against him. Nipples perked through her thin top, scraping against his chest, and oh my God, she wore the tiniest scrap of nothing in the way of panties. He could rip those things off her with one flick of his thumb. He could pin her against the wall and pull those fine legs around his hips and drive his cock into her—

A soft inhale broke the fantasy.

Horror rushing through him, he dropped the woman back to the floor.

No, not “the woman.” Caitlyn. He’d nearly taken Caitlyn Murray up against a wall in a random hotel room in Kansas City. Even now, his erection was nestled against her, as if that part of his body refused to let her go.

“I’m sorry,” he mumbled, placing her firmly at arm’s length.

“It’s … it’s okay.” She sounded awfully breathless. “I should have turned the light on, but I didn’t want to wake you, and … it was my fault. I’m sorry.”

“Yeah, but that’s no excuse for me mauling you in the middle of the night. I was half asleep and didn’t exactly … ah hell, that sounds even worse. I’m really sorry, Caitlyn. It won’t happen again. Do you trust me?”

She didn’t answer for a moment, and he wished to God he could see her face. Just how angry was she?

“Go to sleep, Eli.” It was hard to miss the irritation in her voice. Well, that answered that. She was plenty angry. When he got back to Sapphire Falls, Bryan and Ty would probably beat his ass. And he’d deserve it. Not even a full night had passed in Caitlyn’s company and he’d lost his mind.