Excerpt & Giveaway: An American in Scotland by Karen Ranney 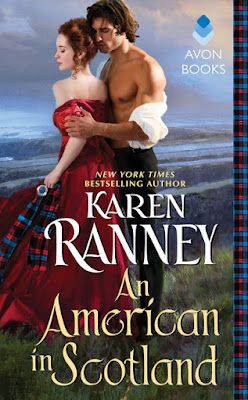 Rose MacIain is a beautiful woman with a secret. Desperate and at her wits' end, she crafts a fake identity for herself, one that Duncan MacIain will be unable to resist. But she doesn't realize that posing as the widow of the handsome Scotsman's cousin is more dangerous than she knew. And when a simmering attraction rises up between them, she begins to regret the whole charade.

Duncan is determined to resist the tempting Rose, no matter how much he admires her arresting beauty and headstrong spirit. When he agrees to accompany her on her quest, their desire for each other only burns hotter. The journey tests his resolve as their close quarters fuel the fire that crackles between them.

When the truth comes to light, these two stubborn people must put away their pride and along the way discover that their dreams of love are all they need.

When you each came into the world, I marveled at the miracle that created you. I held you in my arms and knew I would cherish you until the breath left my body.
Now I must bid farewell to all three of you at once.
The Almighty has indeed challenged me this day.
I know you go on a great adventure and do so with eagerness and enthusiasm. The Highlands offer less opportunity to you of late. I know this and mourn the circumstances of your leaving even as I know you will do honor to the MacIain name.
When someone asks me about my sons, I’ll speak proudly of you. My eldest son, I’ll say, remained in Scotland, a few days’ journey away. But one of my sons traveled to England to make peace with the conqueror, while the other set sail for America.
You will have children of your own, each of them carrying the MacIain blood and name. Tell them about our history, how we dreamed of an empire. Tell them about the place from which we came, a corner of Scotland known for its men of greatness and nobility.
Mention your mother, if you will, who bravely relinquished her sons to the future.
The Almighty has not given us the power of foresight, but I cannot help but think years from now, your children and your children’s children will be proud MacIains, as formidable as their ancestors
Love sometimes means sacrifice, and I feel that truly on this day. I sacrifice you to honor, to your heritage, and to a future only you can create. Go with God, my darling sons. May your dreams be realized and may He always protect you.
Anne Summers MacIain
Scotland
June, 1746

Glasgow, Scotland
May, 1863
Rose thanked the driver as she exited the carriage and made her way down the path to the door. She didn’t know what she expected, but the three-story structure with its curved front surprised her. The bay windows, one on each side of the house, were curved as well. She had the thought that it was a friendly place, that the windows were almost like eyes. The two columns on either side of the front steps created an open mouth, almost as if the house were saying: Who are you? A stranger? Welcome anyway.
What if he refused to see her? What if he sent her away?
That couldn’t happen. She couldn’t allow it to happen.
She’d come so far.
Scotland surprised her, almost as much as its people. Everyone, from the porter to her fellow travelers on the train, had been a delight, genial and exceedingly helpful. While it was true they were curious, almost intrusively so, she didn’t mind repeating that, yes, she was an American. Yes, the war was a terrible thing. Thankfully, most of the discussions of her country ended there. She didn’t have to explain where she came from, what she truly thought about the war, and why she wore mourning. Because she was unaccompanied, no doubt most assumed she was a widow.
Assumptions were wonderful things. They kept her from lying.
Rose had expected a country filled with unique vistas: tall, craggy mountains and heather bedecked glens. She saw those and more, heart-stopping bridges that arched over gorges and rivers crashing over rocks to settle in placid pools. Sections of Scotland were green and verdant. Other places were brown, gray, and black.
When they arrived in Glasgow, her opinion of Scotland underwent a transformation.
Here was a place as bustling as New York. Cranes and spires filled the horizon. The sound of hammering and shouting obscured the call of the seabirds overhead. Docks and ships, long buildings and bustling people, wagons and carriages, all gave the appearance of frenetic activity.
She had no idea Glasgow was so large, so hilly, or so crowded.
After carefully consulting the letter in her reticule, she gave the hired driver the address to the MacIain house.
How odd that after all these weeks, all she felt was an incredible urge to sleep.
The voyage from Nassau to England had been relatively swift, and a great deal less stressful than running the blockade from Charleston outward to the Bahamas.
The train from London had been a marvel of speed and efficiency. Had she been on a different errand, she would’ve enjoyed herself immensely. As it was, each day sounded like a gong in the back of her mind, a deep-throated noise to alert her to how long she’d been gone.
Time was not on her side. 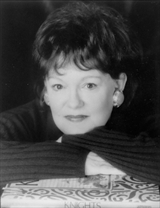 USA Today and New York Times bestselling author, Karen Ranney began writing when she was five. Her first published work was The Maple Leaf, read over the school intercom when she was in the first grade. In addition to wanting to be a violinist (her parents had a special violin crafted for her when she was seven), she wanted to be a lawyer, a teacher, and, most of all, a writer. Though the violin was discarded early, she still admits to a fascination with the law, and she volunteers as a teacher whenever needed. Writing, however, has remained the overwhelming love of her life.


Don't Miss any of the MacIain Series Romances