Except & Giveaway: See You at Sunset by V. K. Sykes 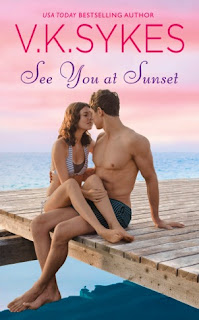 All Holly Tyler wants is a fantastic career, a not-too-committed relationship, and a city where there are no painful memories. Instead, she's called back to her hometown of Seashell Bay to help with her family's struggling general store. It's a town where everyone knows everyone, and where one man could sink Holly's careful plans.

Deputy Sheriff Micah Lancaster has wanted Holly for as long as he can remember. He knows she has a life on the mainland-and a boyfriend-and that there's no real future with her. But now Holly is back and the attraction still flickers between them, a promise of something more. Their desire is stronger than any undertow . . . and once it pulls them under, it won't let go.

The guys exchanged a few words and a fist bump before Aiden strode off. Holly had to shake herself into action, partly because they were two of the hottest guys on planet Earth and any red-blooded girl would be struck dumb at the vision of all that hotness in close proximity, and partly because she tended to freeze whenever she saw Micah these days.
That development was incredibly annoying. The man had been one of her best friends all her life, and yet damned if she didn’t feel like a nervous teenage girl when she thought about being alone with him, even in the store.
“Coffee, Deputy?” she asked brightly. As he strode up, she took a step back to lean against the back counter. The extra four feet of distance did little to diminish the impact of his overwhelming masculinity or the way his tall, muscled form seemed to make the store shrink around him.
“Hell, yeah. You know how I need caffeine in this high-pressure job,” he said as he laid his deputy’s hat on the counter. He flashed her a quick, charming grin. “It’s getting hot out there already.”
It was getting pretty hot inside the store too. She felt herself flushing, even though the store’s aging but still-efficient air-conditioning kept things at a steady seventy-three degrees.
Hormones, dammit. And she wasn’t anywhere near old enough to blame it on early menopause.
Since Micah took his coffee black, all Holly had to do was pour a cup, put a lid on it, and set it on the counter. And, yes, she was avoiding handing it to him in case their hands brushed. “There you go. I just made a new pot a few minutes ago.”
Micah reached into his pocket and pulled out a small wad of bills.
Holly rolled her eyes. “Put your money away, my friend. It’s on the house, as always. Cops and firefighters don’t pay for coffee in this establishment.”
Micah shook his head. “Maybe not before, but now they do. At least this one does. Holly, I’m sure as hell not taking free coffee when Florence and Beatrice are obviously struggling.”
As hard as her aunts had tried to keep the store’s financial woes under the radar, Micah clearly knew they had more problems than only the prospect of competition from a convenience store chain. Though the Jenkins General Store was looking tired, she suspected most people on the island had failed to realize how bad things were. Then again, Micah knew pretty much everything that was going on in Seashell Bay, often via Miss Annie, in whom Florence and Beatrice usually confided.
“It’s just a cup of coffee, Micah,” Holly said.
His expression was polite but implacable. “Doesn’t matter. It’s the principle. And I’m going to buy everything I can here from now on. No more picking stuff up in town just because it’s a little cheaper. Islanders have been doing that more than we should.”
He pushed a five-dollar bill across the counter. “And don’t give me any change,” he said with a little growl roughening his deep voice. Holly found it adorable—also totally sexy, which she would not think more about. 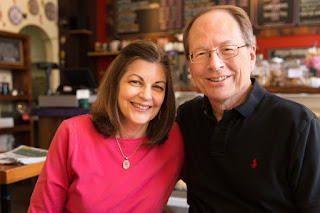 V.K. Sykes is really two people – Vanessa Kelly and Randy Sykes, a husband and wife team who write USA Today Bestselling contemporary romance and also romantic suspense. Randy excels at plot and characterization, but tends to fall down on the job when it comes to that pesky old thing called emotion. That’s where Vanessa steps in. She usually writes the sex scenes too, since Randy is a bit uncomfortable when it comes to that sort of stuff. Vanessa also writes award-winning Regency-set historical romance for Kensington Zebra under her own name. You can check out Vanessa’s bestselling historical romances at www.vanessakellyauthor.com