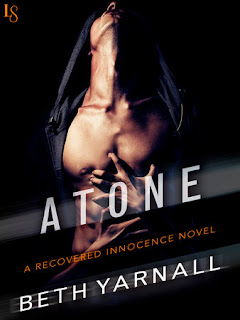 Beth Yarnall’s sexy and emotional Recovered Innocence series continues as two broken souls discover that keeping their hands off each other is even harder than facing their demons.

Beau: Six years. That’s how long I spent behind bars for a crime I didn’t commit—the murder of the woman I loved. Now I’m free, but life on the outside is a different kind of prison. I don’t know who I am or who I want to be. At least I have my sister, Cora. She never stopped believing in me. She even got me a job at the private investigation agency that cleared my name. And then Vera Swain walks into Nash Security and Investigations and kicks my world on its ass.

Vera: There’s only one thing that would make me come out of hiding after two years on the run: finding my sister. I made the mistake of telling a monster about her, the same monster who beat me and broke me. Now I’m forced to confide in Beau Hollis of Nash Security and Investigations. He looks at me like he knows me—the real me. He sees too much, makes me feel too much. The pleasure he offers is exciting and addictive. But I can’t fall for him . . . because my love could get us both killed.

I walked out of the California Institute for Men in Chino, California, two thousand two hundred and seventy-one days—more than six years—after I walked in. I was finally free.
Free.
I don’t have the same definition that most people have for that word. While I’m no longer serving a life sentence for a crime I didn’t commit, I’m far from free. The repercussions of my incarceration blasted every area of my life, pitting or obliterating everything in sight. There isn’t a single thing left unscarred. I don’t have a home. I don’t have friends. I don’t have a job or any qualifications to get one. I don’t have any money. I don’t have the same family I had on the day of my conviction.
And I don’t have Cassandra.
There’s a big gaping hole in me where she once lived. Of all the things that were taken from me, she’s the one thing I can never get back. I left her sleepy, naked, and sated in her bed almost seven years ago, stealing out of her apartment with other things on my mind, unimportant things. I had an early day the next morning and needed to get home. I bent down, kissed her forehead, told her I loved her, and left.
I never saw her again.
She was brutally raped and murdered that night.
I haven’t been able to take a full breath since. Not because of my subsequent arrest and conviction for her murder. That was nothing. Well, not nothing. It was definitely something. But it’s not why I can’t pull in enough air. There’s a hole in my chest she used to fill. There’s too much space and I can’t imagine or even remember what it felt like to be whole. I’ve been walking around with this big, sucking chest wound since the night she died.
I’m raw yet scarred over. Little things scratch at me, reopening the wound so it never truly heals. A song. The scent of jasmine. A movie. A joke. Her name. I haven’t been able to say her name out loud since I screamed it outside her apartment when her body was found and the place crawled with law enforcement personnel.
I see her everywhere.
I get a glimpse of her at least once a day. Every time I turn my head I have to remind myself it’s not her. It will never be her. I won’t get to hold her hand, have her lay her head on my chest the way she used to, or make love to her ever again. I can’t call her and tell her about the stupid things that happened to me that day. She won’t ever tilt her head up with the look in her eyes that was only for me. I haven’t laughed in so long I’m not sure if I remember how.
My sister, Cora, thinks I should see someone, a grief counselor. I don’t want to. My grief is all I have left of Cassandra. Cora doesn’t understand that. No one does. I can’t explain it. There are no words for what it feels like to carry it everywhere. I’m pretty sure it’s the only thing holding me together. I walk around, going through the day-to-day of living, relying on those feelings to get me through. What would I have without them? Who would I be? I’m not the same man who left Cassandra’s apartment that night. I’ll never be him again. I shouldn’t be him. I sure as shit shouldn’t want to be him.
And yet . . .
Sometimes I wonder what it’s like to be normal. What would happen if I took off this mantle of grief and laid it down? Would I stop seeing Cassandra everywhere? Would the smell of a common flower stop reminding me of her unique scent? Would I forget what she sounded like, her laugh, and how she felt under me? Would I lose her all over again, this time forever?
The air outside of prison not only smells different, it feels different. I’m not used to anything resembling normal life. I’m still on a prison schedule despite having been out a couple months now. My only rebellion is letting my hair and beard grow. I don’t know who that man in the mirror is. He’s rougher, harder than he was six years ago. He has scars and crude tattoos jabbed into his skin by makeshift prison tattoo guns. He looks like he doesn’t give a fuck about anyone or anything.
That couldn’t be further from the truth.
Cora arranged for me to come work with her. I think she’s hoping it will give me something to aspire to. I’m lost. I don’t recognize anyone or anything. I don’t know who or what I want to be. There was a time when everything I wanted to do and be was lined up in my head just waiting for me to tick them off like a fucking checklist. Go to college. Check. Get a good-paying job. Check. Marry Cassandra. Check. Buy a house. Check. Start a family. Check. Grow old with Cassandra. Check.
None of those boxes will ever be crossed off.
I have to create a new list. But where do I start? I’m twenty-four years old. I should be halfway through my checklist by now. Cora tells me I can do or be anything I want. She pushes community and technical college catalogs at me, trying to get me interested in something. At night I lie awake and attempt to imagine my life a year from now. All I see is me still lying on Cora’s couch, still struggling to figure my shit out. I’m frustrating her and myself. Maybe this Take Your Brother to Work Day will give me some kind of direction, even if it only helps me realize what I don’t want to do.

Beth Yarnall writes romantic suspense, mysteries, and the occasional hilarious Tweet. She discovered romance novels in middle school and hasn’t stopped writing since. For a number of years, she made her living as a hairstylist and makeup artist and co-owned a salon. Somehow hairstylists and salons always seem to find a way into her stories. Yarnall lives with her husband, two sons, and their rescue dog in Orange County, California, where she’s hard at work on her next novel.