Review & Giveaway: The Rogue Not Taken by Sarah MacLean 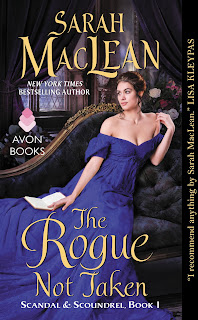 When Sophie, the least interesting of the Talbot sisters, lands her philandering brother-in-law backside-first in a goldfish pond in front of all society, she becomes the target of very public aristocratic scorn. Her only choice is to flee London, vowing to start a new life far from the aristocracy. Unfortunately, the carriage in which she stows away isn’t saving her from ruin . . . it’s filled with it.

Kingscote, “King,” the Marquess of Eversley, has never met a woman he couldn’t charm, resulting in a reputation far worse than the truth, a general sense that he’s more pretty face than proper gentleman, and an irate summons home to the Scottish border. When King discovers stowaway Sophie, however, the journey becomes anything but boring.

He thinks she’s trying to trick him into marriage. She wouldn’t have him if he were the last man on earth. But carriages bring close quarters, dark secrets, and unbearable temptation, making opposites altogether too attractive . . .

Intro from Sarah MacLean
Being shot on the Great North Road isn't exactly a thing people expect to happen, and Lady Sophie Talbot finds herself in the rooms above The Warbling Wren pub, under the welcome care of a rather mad doctor and the watchful eye of the rather infuriating (and infuriatingly handsome) Kingscote, Marquess of Eversley. There are worse things, she supposes. Or are there? Not for King.)

“If you want a bath, you’ll have to accept my help,” he said.

She pursed her lips at that, her gaze settling longingly on the steaming bath. “You mustn’t look.”

“I wouldn’t dream of it.” It might have been the most obvious lie he’d ever told.

Somehow, she believed it, nodding and throwing back the coverlet to step out of the bed. She came to her feet, the top of her head at his chin, and he resisted the urge to help her across the room. “How do you feel?” he asked, hearing the gravel in his words. He cleared his throat.

“As though I’ve been shot, I’d imagine.”

He raised a brow. “Clever. There's food when you’ve bathed." The words summoned a low growl from her, and her hands flew to her stomach. Her cheeks turned red, and he smiled. “I take it you are hungry.”

“Food after the bath. And then sleep.”

“What with you being called King.”

She moved past him to the high copper bathtub. He resumed his place against the wall, arms crossed, watching her carefully as she reached down, her long fingers trailing in the hot water as she sighed her anticipation. The sound was like gunfire in the room—pure, unadulterated pleasure. It was delicious.

King stiffened. He was not interested in the lady’s pleasure.

If only someone would tell his body that. 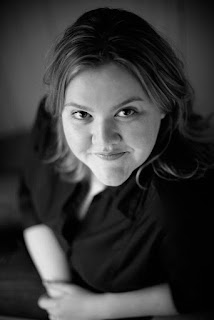 Sarah MacLean grew up in Rhode Island, obsessed with historical romance and bemoaning the fact that she was born far too late for her own season. Her love of all things historical helped to earn her degrees from Smith College and Harvard University before she finally set pen to paper and wrote her first book.

Sarah now lives in New York City with her husband, baby daughter, their dog, and a ridiculously large collection of romance novels. She loves to hear from readers. Please visit her at www.macleanspace.com

How could you not want to read a book with a title like this. How cool is the title The Rogue Not Taken? Of course it's about more then just the title. It's also about the story. I will admit that I've never read MacLean, but always wanted to try her. So many fellow readers talk about how funny she is so I needed to try it for myself.

I'm glad I did. I will have to tell you that for me this book will never be a favorite for me. But It's good enough that I'd read another by her. Or I should say parts of it is good enough.

Usually I'm a much bigger fan of the hero's in the books I read then the heroines. But I have to say that wasn't the case in this book. I had trouble with King. He rubbed me wrong occasionally. Every so often he had is nose up in the air.

Now Sophie I really liked. She is a free spirit that refuses to do what others think she should. You can't help liking that about her. She's far from being a snob.

I do think that Sophie and King have great chemistry together and I think that's what saves the book for me. I liked them as a couple. King does finally get his act together but is it to late? You'll have to read The Rogue Not Taken to decide for yourself. I will try the next book in there series with the hope that I'll like the hero much better.

If you've read The Rogue Not Taken or any other book by Sarah MacLean I'd love to hear your thoughts. Thanks for visiting and happy reading!