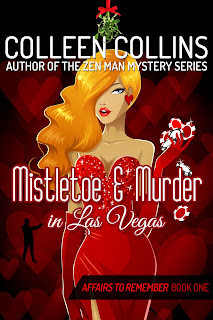 All 31-year-old, Las Vegas criminal lawyer Joanne Galvin wants for Christmas is a few clients so she can make ends meet. Instead she’s roped into defending the notorious, alleged Timepiece Arsonist; tracked by a hunky special agent and his arson dog; and chased by a serial killer. Just when her life is starting to feel like the Nightmare Before Christmas, she receives an unexpected gift that offers hope for this Christmas to possibly be the most wonderful time of the year...maybe even for years to come.

A story about a down-on-her-luck lawyer, a jinxed special agent, and an arson dog named Maggie who join forces in this heartfelt, humorous romantic-mystery. 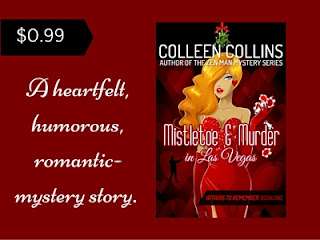 Now, at 10:00 a.m., Joanne stood in the well of the courtroom, eye-locked with the judge who frowned so hard his bushy white eyebrows resembled a puffy storm cloud over his dark eyes.
She did her best to look dignified despite the tension and her feet, which were aching in a pair of new, insanely-high heels that she impulsively decided to wear thinking they added some noble height to her five-two. Like that mattered now.
“Miss Galvin,” the judge finally said. “That comment comes darn close to violating my ruling during a trial, which is direct contempt of court for which I could send you to jail. Like this very instant.” He snapped his fingers.
Her insides shriveled as the stocky courtroom deputy lumbered toward her, his rubber-soled shoes squeaking on the marble floor.
“Deputy, I did not order you to arrest her!” The judge pointed to the spot where the deputy had previously stood. As he squeaked back across the floor, the judge sighed heavily and turned to the twelve wide-eyed jurors. “I direct the members of the jury to disregard the defense’s statement….”
Joanne glanced at her investigator and best friend, Gloria Falco, who sat at the defense table wearing an I-can’t-believe-this-crazy-shit expression. They had been friends since their first day of work at the Clark County Public Defenders’ office, almost five years ago. Joanne, then twenty-six, had recently passed the bar exam and was beginning her career as a lawyer. Gloria, a year younger, had worked as a private investigator in Brooklyn for her dad, the legendary private eye Sal Falco. Shortly after he died, she relocated to Vegas where her brother, a talent manager, lived.
For court Gloria always toned down her rock-n-roll, tough-chick look. Today she’d feathered her short dark hair rather than spiked it, and ditched her usual tight jeans, form-fitting T-shirt and badass boots for a powder-blue pantsuit and flats.
Next to Gloria sat Sebastian wearing a mauve shirt, black tie and gray suit his mother picked out for him at Goodwill. Last June his life was unfolding—he’d celebrated his twenty-first birthday, landed a valet job at The Tropicana, and fell in love for the first time with a girl named Nina. All that changed on July 3 when the police arrested him for attempted murder. Sebastian matched eyewitnesses’ descriptions of the person who shot at a man in a grocery store parking lot. Now, if found guilty, he faced spending the next twenty years of his life in prison.
With a small shake of his head, Sebastian mouthed F-M-L—Fuck My Life, street slang expressing his incomprehensible despair.
His anguish broke her heart. Joanne had not become an attorney because she had political aspirations like Sam Burnette or viewed lawyering as a get-rich career. As corny as it sounded, she went to law school to effect justice. Considering how freakishly difficult achieving that simple goal turned out to be, maybe Judge Fields had been right to ask if she’d lost her mind.

When not sleuthing or writing, Colleen loves spending time with her husband, two Rottweilers (named Jack Nicholson and Aretha Franklin), and three cats.