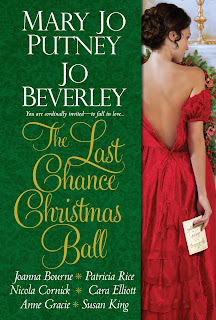 Upstairs and downstairs, Holbourne Abbey is abuzz with preparations for a grand ball to celebrate the year’s most festive—and romantic—holiday. For at the top of each guest’s wish list is a last chance to find true love before the New Year…

A chance meeting beneath the mistletoe, a stolen glance across the dance floor—amid the sumptuous delicacies, glittering decorations, and swell of the orchestra, every duchess and debutante, lord and lackey has a hopeful heart. There’s the headstrong heiress who must win back her beloved by midnight—or be wed to another….the spinster whose fateful choice to relinquish love may hold one more surprise for her…a widow yearning to glimpse her long-lost love for even one sweet, fleeting interlude …a charming rake who finds far more than he bargained for. And many other dazzling, romantic tales in this star-studded collection that will fill your heart and spice up your holidays…
Goodreads Book Link

From A SCOTTISH CAROL by Susan King

Henry hesitated. Had he grown so cold? “Doctors, even in training, must forego holiday privilege. And you know we do not widely celebrate Christmas in Scotland—shops are open, merchants and laborers go about their work. Doctors attend, and students study.”

“Will you not accept papers after the Yuletide?”

“I will be traveling then.” On the insistence of his sister, whose husband was unable to attend the ball, Henry would be off to Northumberland. “I intend to read the papers before the New Year. Since Scots celebrate Hogmanay robustly, you will have your holiday, sir.”

“I plan to be traveling on Christmas Eve,” Hay persisted.

“Then finish your task early. Good day. I am off to find Dr. Douglas’s treatises on the heart, and I suggest you do the same.” He turned on the steps, ducking into the wind.

“All in good order?”

“Aye.” Hay pulled free. “I am familiar with Dr. Douglas’s work. See.” From a pocket, he extracted a volume to show its title: A New Treatise on Diseases and Conditions of the Heart.

“His last book! How did you get this? The library does not loan its volumes.”

“His writings are all—in my father’s collection. I am reading this one again.”

“Impressive. It is not for the novice. This is one of his later works, after Douglas became convinced that heart disease is as dependent on sentiment as on physical causes. Many thought it rather a medieval theory.”

“Are goodness and happiness not healing in their own way?” Hay smiled.

“Somewhat.” The boy’s smile was damned familiar, but how?

“Sir, please keep this copy. My father’s library is mine now. I want you to have this.”

Hay nodded, but Henry frowned. Somehow the boy affected him, weakened his deliberate gruffness. That mysterious resemblance was like the past tapping him on the shoulder.

“Blithe Yule to you, sir.” Hay touched his hat brim. The wind tore at the overlarge hat, unfurling long, curling tendrils of golden hair, feminine as a girl’s.

Girl. Dear God. Henry frankly stared. He glanced down, up— down again, noticing curves beneath baggy clothing, long hair tucked under a collar. How had he not seen this before?

She crammed her hat down and stepped back, lurching with the cane. “My carriage—there—good day!” She hurried toward a waiting chaise.

Henry stared. Clary! John Douglas’s only daughter had been nineteen last Henry had seen her, seven years ago. And here she was, posing as—Hay?

Years ago, Henry had been welcomed in the Douglas home as he collaborated with his mentor, sharing family meals—later, sharing a good deal more with Clary, until that came to a sudden end. She was beautiful and shy, with a weak leg from a paralytic fever in childhood. She had intelligence, courage, a soft smile, and he had loved her. But her father had discouraged Henry’s suit—surprisingly, it seemed at the time—and Clary had soon married another.

Henry had joined a regiment, determined to let the past go. But he had not been able to forget Clary.

Yet she had been under his nose these months and he had not noticed. What the devil was she doing in boy’s kit, attending anatomy lectures? She knew more about academic medicine, having edited her father’s writings, than most of his students. Women, even professor’s daughters, were forbidden to enroll in the university—but Henry would have let her slip into his lecture hall had she just asked.

Stepping into her carriage, Clarinda Douglas paused. Her wide gray eyes met Henry’s intent gaze. Then she all but tumbled into the vehicle, and the coachman slapped the reins.