Excerpt & Giveaway: Do You Believe In Santa? by Sierra Donovan 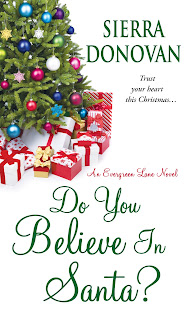 Do You Believe in Santa?

Miracles don’t just happen on 34th Street. They can happen right in your living room—if you’re willing to believe…

What grown woman claims to have seen Santa Claus? Mandy Reese, for one—on a very special Christmas Eve when she was eight years old. These days, Mandy works at a year-round Christmas store in Tall Pine, California, where customers love to hear about her childhood encounter with Saint Nick. But when Jake Wyndham arrives in town—charming, gorgeous, extremely practical—Mandy faces a dilemma. Deny what she saw, or let Jake think she’s sugarplum crazy?

Jake scouts hotel locations all over the country, but he’s never met anyone quite like Mandy before. Her warmth and sparkle are irresistible, but…meeting Santa? Really? Jake’s no Scrooge but he’s definitely skeptical. Then again, there are all kinds of things Jake never experienced until he came to Tall Pine. Like autumn snow. Mind blowing kisses. And the magic of falling head-over-heels, madly in love…

When Mandy Reese was eight years old, she saw Santa
Claus.
She slipped out of her room on Christmas Eve after her mother went to bed. As Mandy tiptoed down the hall, trying to be silent, she thought of the poem: Not a creature was stirring, not even a mouse. . . .
The Christmas tree was still lit up in the living room, as if it, too, were waiting. The nighttime cold of the house bit through her flannel nightgown, and Mandy wished she’d grabbed her robe and slippers. But she didn’t want to risk going back down the hall and waking her mother. So she pulled a heavy blanket down from the back of the sofa and curled up under it. She laid her head on the arm of the couch to get a good view of the tree at the end of the room near her head, and the fireplace at the other end, down by her feet.
Barely daring to breathe, she waited.
The lights from the tree were bright enough to show the time on the clock over the mantel: almost eleven-thirty. Mandy’s vigilant eyes drifted from the fireplace to the tree and back. She knew there was no way she’d fall asleep.
But it felt as if some time had passed when something made her sit up.
The only light in the room still came from the tree, yet somehow it seemed brighter in here. Her eyes darted to the fireplace. And he was there.
He did wear a red suit, although it was a darker red than she’d seen on the Santas at the store—the ones she’d always been told were just helpers for the real Santa. His beard was full and white, his eyebrows were bushy, and his eyes were blue. Not quite twinkly, a little more serious than that, but warm and friendly as they met hers. She’d heard that watching for Santa could make him pass you by, but that hint of a glimmer in his eye told her she wasn’t in trouble.
Mandy opened her mouth to speak, but she couldn’t think of a single word to say. The whole room felt hushed, as if time were standing still.
She couldn’t be dreaming because her heart was beating so fast. But she remembered to pinch her forearm, hard, just to be sure. It hurt, all right.
He took a step backward, toward the chimney, and raised a black-gloved finger. At first Mandy thought he was going to put it to his lips, signaling her to be quiet. But he rested it alongside his nose, just like the poem, and nodded.
The room brightened, and Mandy had to shut her eyes against the glare.
When she opened them, the light in the room had returned to the normal Christmas-tree glow, and he was gone. She heard the clock on the mantel ticking; she didn’t remember hearing the sound while Santa was in the room. The hands showed it was just after midnight, although she knew for certain she hadn’t heard it chime.
She pinched her arm again. Once again, it hurt. When she looked down, she saw a small red mark forming right next to the spot she was pinching now.
Under the tree, she couldn’t see any difference in the number of presents. But she remembered what her mother always told her: Santa Claus was about more than presents.
“I saw him,” she whispered.

When Mandy told her mother about it the next morning, her mom checked the doors and windows and counted the presents under the tree.
“I thought you believed in Santa Claus,” Mandy said.
“I do.” But the worried look didn’t quite go away.
The memory of her mother’s reaction kept Mandy from mentioning Santa when school started again in January. If her mom didn’t believe her, the other kids surely wouldn’t, and Mandy didn’t want to fight about it. So she kept it to herself, like her own special secret. Until the next school year.
It was mid-December, and she was leaving school Friday afternoon to catch the bus. There hadn’t been any snow for a couple of weeks, but there was a snap to the air as she walked. Mandy was so busy looking up at the sky for signs of snow, she didn’t see the crowd outside the gate until she was nearly there.
Students clustered around an auburn-haired woman who held a microphone. A man stood nearby, aiming a video camera at the woman. Then it clicked. Mandy had seen her on the television news.
As the kids crowded around the reporter, she held a microphone in front of some of them, one at a time. Most were younger than Mandy. Older kids jockeyed behind the TV reporter, trying to poke their heads into the picture.
“I believe he’s real,” a little blond boy, probably a second-grader, said.
“He always eats the cookies we leave for him,” a fair-haired girl, who looked like his sister, said.
Mandy joined the group as if drawn by a magnet. Since many of the children were shorter, she could see over their heads.
“What about you?” The reporter aimed her microphone at a brown-eyed girl with short black hair.
“I don’t know.” Her voice was very soft. “I think so.”
“I used to believe in Santa, but I know better now.” That was Julie Ashman, from Mandy’s own class. Mandy felt her blood start to simmer. Being wrong was one thing, but saying things like that in front of these little kids . . .
“Santa Claus is a fake!” one of the taller boys behind the reporter shouted toward the microphone.
“No, he’s not!” The little blond boy looked faintly horrified, and Mandy could see uncertainty creeping into his face.
The reporter tried to regain control, turning her microphone toward the smaller boy again.
“Oh, yeah?” the big boy jeered. “Have you ever seen him? Not in a store. That doesn’t count.”
She couldn’t stand it. Mandy shouldered her way in. “I saw him.”
Everyone turned in her direction. Mandy’s face felt hot, but she was determined to set them straight. “He was at my house.”
“Not your dad, all dressed up,” the older boy scoffed.
“My dad doesn’t live with us anymore,” Mandy said, “and I saw Santa Claus in my living room last year.”
Suddenly the microphone and the camera were pointed at her, and Mandy felt the words rush out, spilling the details she’d played over and over in her mind. The story she’d kept bottled up for nearly a year. 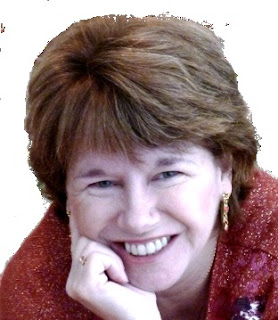 Sierra Donovan is a wife, a mother of two and a writer, though not always in that order. Her greatest joy is helping people find true love on the printed page. She is a firm believer in Christmas, classic movies, happy endings and the healing power of chocolate. Sierra’s first novel, Love On The Air, was a Holt Medallion finalist. Her 2014 Kensington debut, No Christmas Like The Present, won the Golden Quill Award for Sweet Traditional Romance. Her 2015 novel, Do You Believe In Santa? marks the beginning of Sierra's new Evergreen Lane series. You can email Sierra at sierra_donovan@yahoo.com, or visit her website at www.sierradonovan.com.