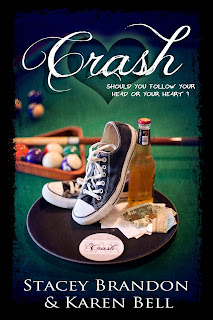 Charli has a plan for her life. It does not include the hot guy at table four. This is the first time she’s seen him at The Crash, the bar where she works most evenings. From the moment he arrives with his power suit, condescending friends, and unnerving stare, he’s hijacked her thoughts. It doesn’t help that he keeps finding ways to insinuate himself into her life.

Logan has a plan for his life. It does not include the quirky little waitress at the new bar his friends discovered. He has a lot of obligations and very little time. If he needs a female distraction once in awhile, she isn’t the type of woman he normally looks to. Despite all of this, she has become what he wants most of all.

Working to overcome all the things threatening to separate them won’t be easy. Can they find a way to meet in the middle if it holds the promise of happily ever after? 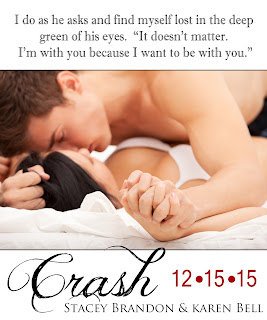 I tilt my head up toward his and he leans forward to kiss me so softly that his lips are barely touching mine. It’s sweet, but being this near him is making me a little crazy, so I increase the pressure of my kiss. I hear him groan and I open my mouth a little to deepen our connection. He finally let’s go of my hands and I bury them in his hair. His arms go around me and I feel the heat of his hands running up and down my back. He flicks the tip of my earlobe with his tongue and then takes one hand to widen the neck opening of his large sweatshirt I’m wearing. I feel a trail of sensual heat as he nips and kisses my neck, stopping at my collarbone. When he nuzzles on the underside of my jaw, I gasp at the mildly painful pleasure of his coarse stubble as it scrapes against my tender skin.

My breath is coming out in little gasps and in the back of my mind I worry that I sound like a panting dog or something. God, I hope he doesn’t think I sound like that! That’s not sexy!

When I crawl up into his lap and straddle him, I can tell I must be doing something right. I mean, I can really tell. I feel like I’m sitting on a lead pipe, a really big pipe. Is it too early to check out his pipe? We haven’t even had a real first date. I’m acting like a total slut.

I break away and look at him. His eyelids look heavy and his breathing is as labored as mine. I see beads of sweat in his hairline too. Damn. I’m a good little slut at least.

“Is something wrong?” he whispers with concern. His hands have stopped moving, but they are still firmly wrapped around me, cradling my ass possessively.

“Nope.” I take a deep and much-needed breath. “I’m just trying to convince myself that we should maybe try dating before doing all the naughty things I’d like to do right now.” He closes his eyes and groans, so naturally, I giggle.

“You’re right,” he says in a tone that makes me think he is wishing I was very wrong. He opens his eyes and I see that mischievous glint I’ve come to crave. “I’m dying to hear all about these naughty things.” He leans closer and kisses the base of my throat. “I’d really love to do all those naughty things.” He uses his hands, still around my backside, to slam me hard against him and now I’m the one groaning. “But…” He pulls back slightly and I want to cry out from the loss of his full heat. “I’m not trying to rush you. I’m not just looking for a quick lay, little Chuck.”

I cock my head to one side and give him my crooked smile. “You mean… you don’t want to fuck a chuck?”

His laughter explodes so unexpectedly loud and deep that his entire body convulses and I’m thrown onto the floor. Why does he keep knocking me on my ass?

Then Liv’s bedroom door is thrown open with a crash that could wake the dead. “What in the hell is going on out here?”

I stare up at her from my ungraceful position on the floor. “Liv, if we’d been having wild sex out here, you’d be very embarrassed right now.”

“If your sex involves laughing like fucking hyenas, then you should be the one embarrassed, not me!” Marching back into her room, she slams her door closed with another crash.

Logan is still laughing and gasping for air, and I see tears streaming down his face. “You two are fucking insane.” 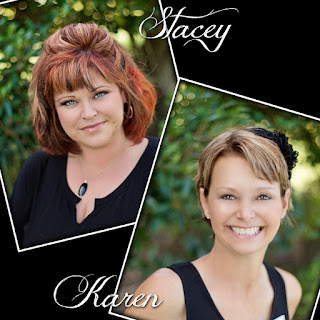 Once upon a time, these two hookers became best friends…

Stacey Brandon and Karen Bell both live in the same small Texas town on the Gulf Coast, are happily married and the proud Moms of awesome kids. Stacey owns and runs a photography studio and Karen designs and sews her own children’s clothing line. They met over fifteen years ago when they decided to turn one large professional space into a single home for both businesses.

Well, that’s all the boring facts expected to be included in an “about the author” page, right? The reality is so much more fun. Stacey and Karen and their families spend holidays together, travel together… and generally turn every situation into something crazy and chaotic. They are both fluent in English, Sarcasm and Profanity and have decided the irrefutable proof of their best friend status is how often people assume they are “together” when in public. The poor husbands are good sports about it… and might even encourage this misconception at times for sheer entertainment value.

When Karen battled cancer… and kicked its ass… in 2014, they learned to value every day and quit worrying about what others think. Do what you love! Karen is happy to take advantage of the situation though. She loves to remind everyone she “had the CANCER, dammit!” and now she can always and forever claim the last brownie ;) 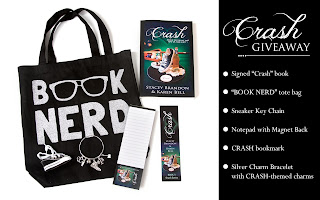