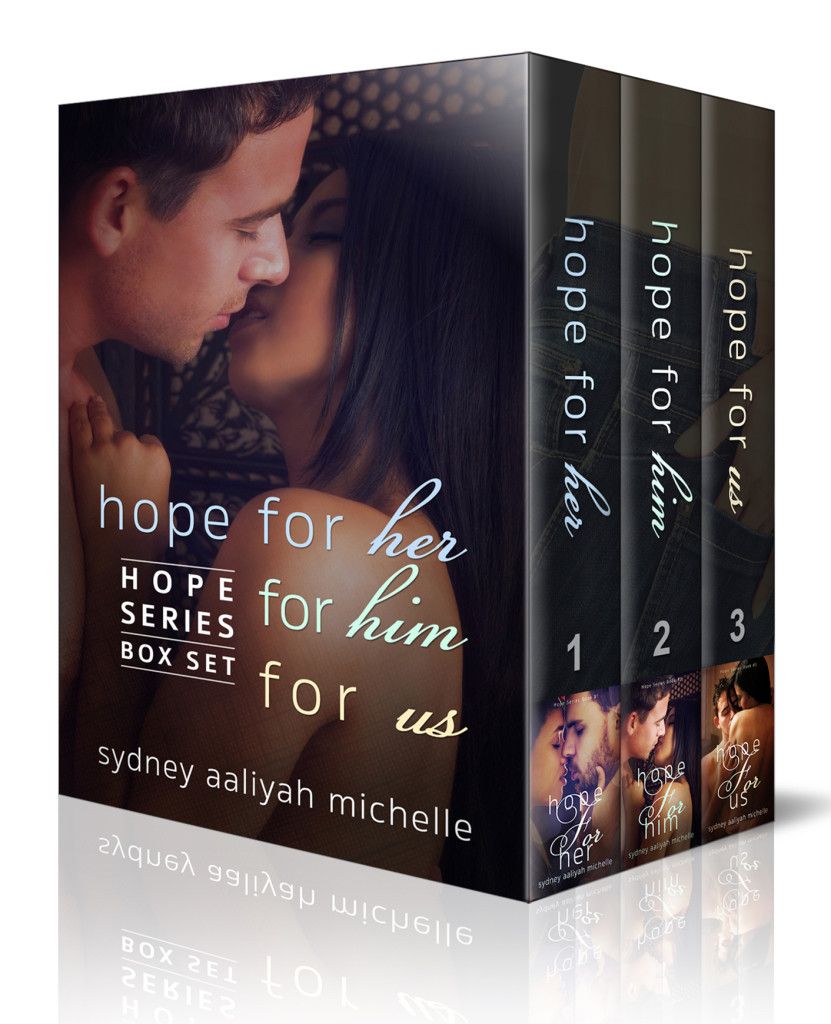 $2.99 or read for FREE with Kindle Unlimited 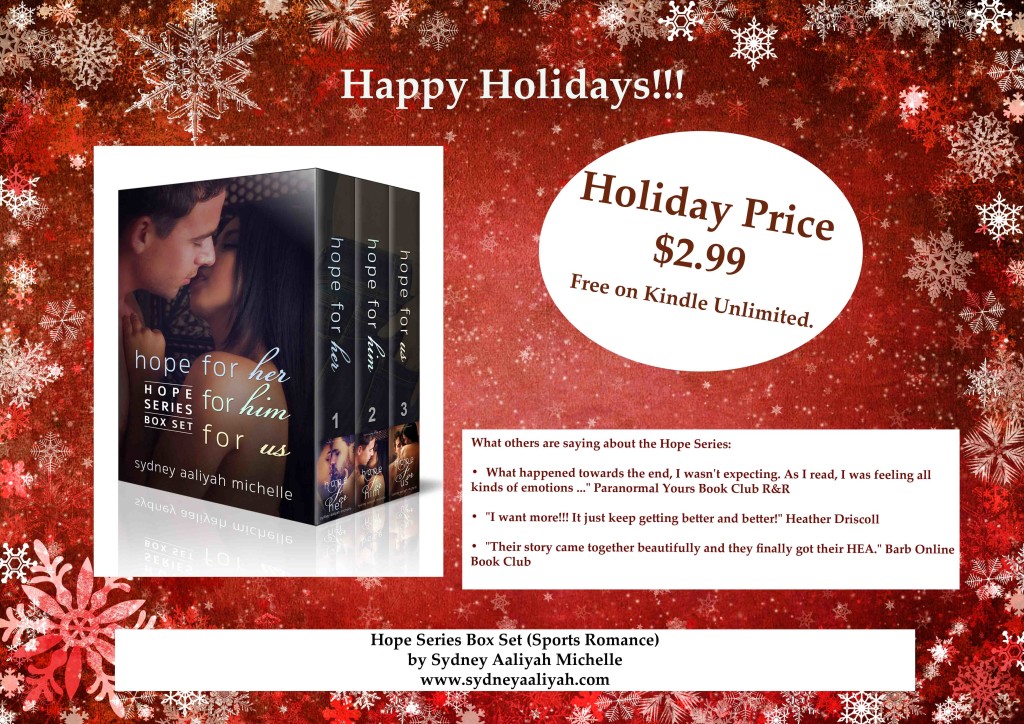 Hope for Her - Book #1 What do you HOPE for? Josh is on his last chance to live up to his family’s obligations, but he meets a girl that his father won't approve. Carrington wants to feel special and Josh's attention is exactly what she craves. Their volatile relationship has Josh questioning their connection, while Carrington develops feeling for someone else, but they aren't ready to give up hope.

Hope for Him - Book #2 What do you HOPE for now? Carrington is ready to be with the man of her dreams. Jackson has moved on in need of a more normal life. After an epic kiss, they know their life will never be normal again. Can Carrington and Jackson find their way back to each other or will their past continue to tear them apart?

Hope for Us - Book #3 What do you HOPE for still? Carrington's past haunts her around every corner. A move to Arizona will give her much needed distance. Jackson is one mediocre season away from being a bust in the NFL. A trade to Arizona with no distractions is what he needs to turn his career around. Carrington and Jackson are back tougher again. Are they ready to admit, they have no hope without each other?


What others are saying about the Hope Series: 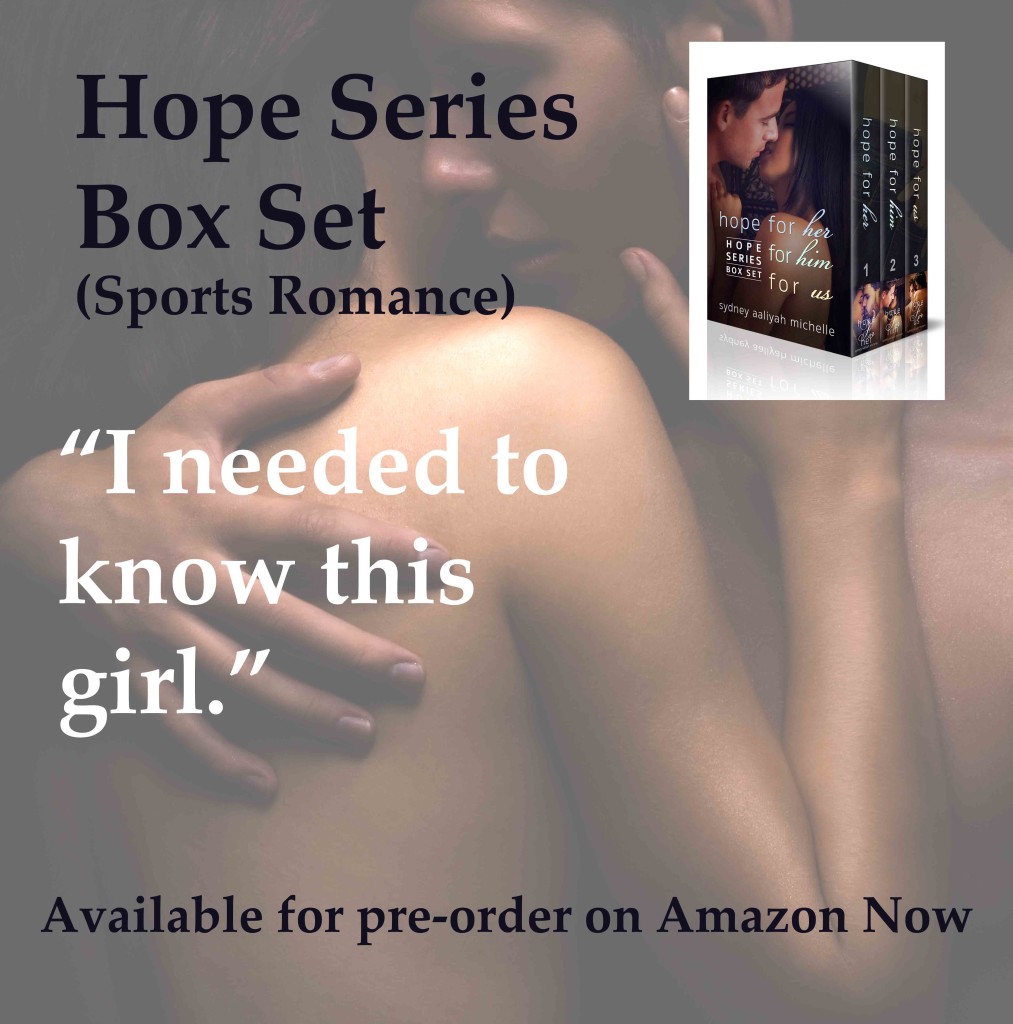 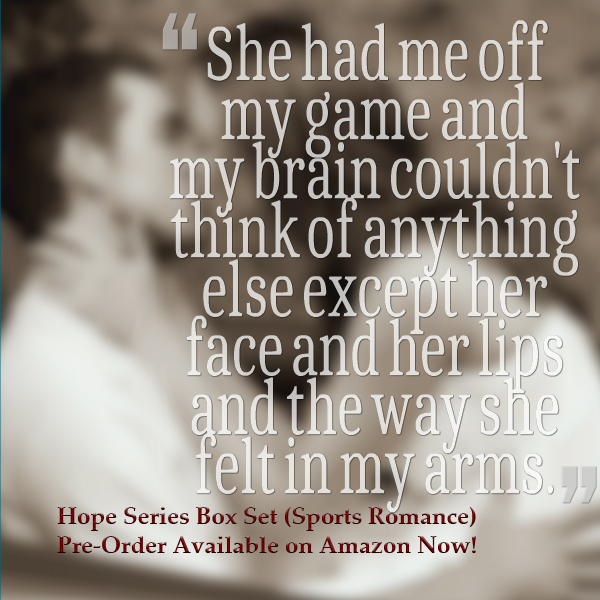 Carrington lips asked to be kissed. They were soft and smooth and defined with no assistance. I only ever saw her wear lip-gloss. These lips were created for me. Her body was made for me. It responded to my every touch. When my lips found hers, her heart raced. It thumped against my chest. Her arms tensed around my neck, she sighed, and I pulled her closer. My hand went from rubbing her cheek to sliding down her neck. It rested on her chest; it had found its home. My other hand worked its way down her back and around her waist. They had an agenda, and I had no control over them. They touched and felt every place they had access to and would have been more daring if we weren't perched on top of a roof. My lips were a bit more cautious, kissing her soft at first and them firm, taking her lead. I wanted her to react to me and let me know how comfortable she was with what we were doing and how fast we were going. 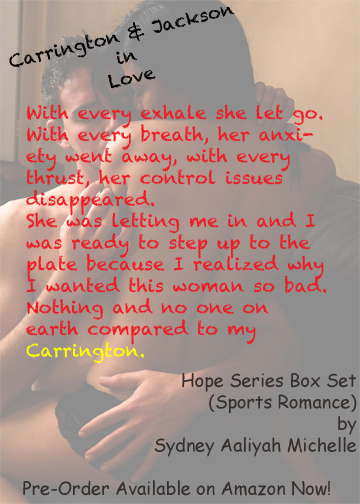 “Carrington. Look at me.” She bit her lip and started looking around again, but then she looked up and I saw it. She looked at me and I smiled before I could stop myself. This made her even angrier, which made me laugh. “What is so funny?” “This, you and me after all this time in the same room pretending like it’s no big deal.” I stood up and moved to the seat next to her. She sat back and crossed her arms over her chest. “I’m not pretending anything.” “They why are you so pissed off.” “Because, I’m mad at you.” “For what?” She uncrossed her arms and stood up. She headed over to the window and I followed, my eyes seeking the other thing that was uniquely Carrington. That epic ass of hers made me want to call my agent and thank him and give him a raise. I chuckled at how she effected me even so many years later. When I looked up at her face, she had a smirk on her face I couldn’t read. “For that.” “I’m sorry. What?” “For looking at me like that. For walking in her like Mr. NFL Quarterback who everyone loves and adores and expect me to do the same.” “What are you talking about?” I asked. “What are you doing here?” “I was traded remember.” “I just don’t need this in my life right now.” “Well, I’m so sorry that I am interfering with your life again. It’s not like I can afford to handle this distraction either. I have enough to worry about without trying to decipher your damn relationship specifications.” “Relationship specifications. What are your talking about?” “Forget it.” I grabbed the folder and started flipping through the contract. I felt her beside me as she leaned over and took the folder and slide it down the table. I stood up fast and stepped in front of her. My blood boiled. Now I was pissed off. “I’m not going to do this again. Give up everything to prove to you how I feel about you only to have you create some tiny issue to justify why we can’t be together only because you too scared to admit the truth.” She stepped back, but she didn’t have far to go, the window stopped her progress, but she stood tall in heels and attitude staring up at me. “And, what is the truth.” “Falling for someone again, scared the shit out of you.” Her chin dropped to her chest and she relaxed her arms. She leaned back against the window and look up at me. When she blinked back her tears before they fell, it crushed me. I didn’t mean to say that, but it came out before I could stop myself. I relaxed my arms, too. I wanted to hold her, lean over and kiss her and show her how even after all these years, I wanted her. I wanted to tell her how not a day went by that I didn’t think about her. I wanted her to be honest with me and tell me she felt the same. I stared down at her, fixated on her lips. She bit it as if she could feel what I was thinking. I leaned in a little more. She placed her hand on my chest I closed my eyes and said a little pray of think for who ever saw fit to put us in each others lives, but when I opened my eyes, she was gone. 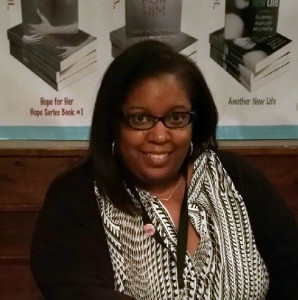 Sydney Aaliyah Michelle is a Contemporary Romance writer, a voracious reader and movie fanatic who hails from Texas. After surviving 5 1/2 years living in China, she had the courage to finally pursue her passion and become a writer. Sydney has been blogging at sydneyaaliyah.com for three years, where she interviews people about their tattoos, discusses her favorite movie quotes, and journals about her writing and editing process. Sydney's novels tackle that dramatic world that is college and professional football and she writes heroins that love their men and the sport that they play. She identifies the sci-fi action flick "The Matrix" as the best representation of her life in the past. She is now blessed to be awake and doing what she loves. She can recite the entire script from the 80's teen comedy/drama "The Breakfast Club" and loves any and everything associated with the Avengers Movie, especially Tony Stark. When it come to books, Sydney reads different genres, but some of her favorite writers are Stephen King, Alex J. Cavanaugh, J.A Huss, M. Never & Emily Bronte. Under the Dome, The Great Gatsby & Wuthering Heights are her favorite books