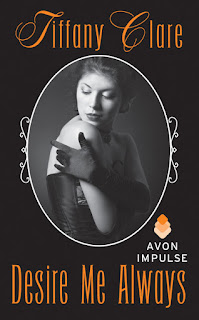 Her secret lover…is her new husband…

Amelia Grant never expected to become Mrs. Nicholas Riley—despite their torrid affair. But now the wife of London’s most infamous businessman, she knows her life will never be the same. Nick has shown her the ways of sinful pleasure and the depths of his desire—but the truth within his heart is another story...

Amelia knows his past is a dark secret, but will their new marriage bring them closer than ever? Or will the pain of the past keep them from finding their happily ever after?

“You are the most beautiful bride I’ve ever laid eyes upon,” Nick said, and it melted her heart to hear those words.
Nick’s hand slid away from her face to grasp her hand. He led her out of the church. His focus was solely on her, as though she were the only person to look at—as though it was only the two of them here witnessing this great event.
A carriage waited just outside, ready to take them back to the inn. As they made their way to the open barouche, guests threw seeds and nuts over their heads that rained upon them in a rite of fertility. It shouldn’t surprise her that everything down to the finest detail had been planned for them while she hid in her room, ashamed that she had once again been the victim of another’s hatred.
This one moment of normalcy brought more tears to her eyes.
Her wedding day proved to be the most perfect day in her life.
Before she knew it, Nick was handing her up into the carriage, pulled by two white geldings, champing at their bits to be given free rein.
“How ever did you procure them?” She leaned forward, wishing for a better look at the beautiful animals, wishing she could touch them in all their majesty.
Nick hauled her down next to him on the soft velvet seat and pressed his fingers to her veil-covered lips. “We didn’t have time to plan a wedding more deserving—”
“Nick . . .”
“It’s a gift. One of many I intend to shower you with.”
Amelia lowered her gaze, but she couldn’t hide from Nick for long; his fingers were beneath her chin, lifting her face, forcing her to look at him and see the truth in his eyes.
“Don’t shy away from me, Amelia.”
“Today has been everything I ever wished for—and everything I never imagined possible. I’m overwhelmed by the emotions flooding me. By the love I feel for you . . . by everything. Oh, Nick, today has been so perfect I can’t find the right words of gratitude.”
“Words aren’t needed.”
Nick’s hands gathered up the lace of her veil. Amelia grasped his wrist before he could reveal her face. The carriage hadn’t yet moved, and she wasn’t ready to share her wounds with the world, even though it was only a matter of time before she would have to face all the kind people who had attended their wedding.
“I will kiss my bride and claim you in front of our friends and guests.”
Amelia gave a sidelong glance toward their audience, waving good-bye and cheering for them. What did she have to lose in ceding to Nick’s one wish?
“Trust me,” he said.
Nick’s hands engulfed hers, and he lowered them to her lap, quashing her efforts to try to pull the veil back in place. He used his free hand to gather up the delicate gauze. As the last bit of Chantilly lace cleared her mouth, Nick laid his lips upon hers.
There was latent promise in the fold of his mouth over hers. It was like he was daring her, pushing her boundaries to see just how far she’d go. Would she deny herself something she wanted as much as he did? If she were a braver person, she would have lifted her veil in front of the guests, but she still wasn’t ready to take that step. Instead, she pulled away, thankful the veil hid her furious blush from everyone who cheered them on.
“Wave good-bye to our guests, Amelia. I’m about to steal you away for what remains of the week.” 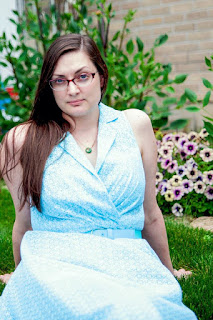 Deciding that life had far more to offer than a nine to five job, bickering children and housework of any kind (unless she’s on a deadline when everything is magically spotless), TIFFANY CLARE opened up her laptop to write stories she could get lost in. Tiffany writes sexy historical romances set in the Victorian era. She lives in Toronto with her husband, two kids and two dogs and you can find out more about her and her books at www.tiffanyclare.com