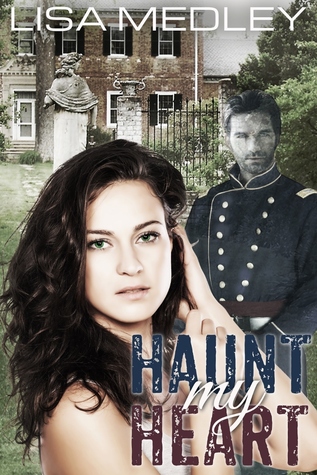 Haunt My Heart
by Lisa Medley

A Civil War soldier is hexed and dies to save his men. Can he find true love to live again?

Sarah Knight has a job she’s good at, a quirky BFF, and a boyfriend who’s bad for her. When Sarah unearths a Civil War artifact on a ghost hunt at Chatham Manor in Fredericksburg, VA, she brings home more than a souvenir.

Lieutenant James “Tanner” Dawson fought for the Union, working as a supernatural liaison for his Major General in a secret Masonic offset called the Brothers of Peril. When he’s hexed by a witch, he learns the only way to save his men is to die himself. But death is not the end. Awakening 150 years later, he knows if he wants to be corporeal again, he has to find true love to break the hex: a task no easier in 21st century than it was in the 19th. 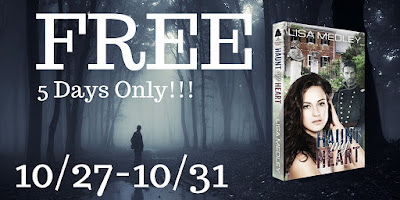 It all starts when Sarah finds a ring on the grounds of Chatham Manor after a night of ghost-hunting. She takes home much more than a souvenir.

Ellie opened the driver’s side door, and Sarah waited for her to crawl across the seat of the old Mustang and pop the passenger-side lock. The broken power locks were one of many deficiencies in the classic car. Sarah retrieved her betraying phone from her pocket and powered it up as Ellie shuffled about inside the car.

As she checked her phone display, a glint of light on the ground to her right caught her eye. Aiming her screen at the ground like a flashlight, she bent low and searched for the source of the flash. Just as she began investigating, though, she heard the lock pop, and Ellie pushed the door open. The door hit Sarah in the head, knocking her to the cold, hard ground.

“Sorry,” Ellie said, scrambling to catch the door before it slammed closed again.

Sarah mumbled a few choice obscenities and rubbed her head. She reached down and ran her finger over something half-buried in the ground.

“What is that?” Ellie was hanging out the car, her body stretched across the seats.

“I don’t know.” Sarah turned the flashlight of her phone up to full beam and picked at the object in the frozen turf. “Do you have a pen or something?”

Ellie scuffled around inside the dark, rolling landfill that was her car—the interior lights long burned out—and produced a screwdriver instead. “Will this work?”

Sarah took the offered screwdriver and dug at the buried treasure. After breaking it free from its cold grave, she examined it by the light of her cell phone. “It’s a ring.”

Ellie scrambled back into the driver’s seat. Sarah joined her in the car, then shut the door against the cold.

“Hold the light,” Sarah said, digging a Kleenex from her coat pocket to clear as much of the mud from the ring as possible.

The ring remained caked with mud, which filled the engraved edges, but the stone cleaned off easily enough. The set, a square cut black onyx, glinted. The cold metal of the band warmed in her hand.

“You know what that is, right?” Ellie asked.

“A ring?” Sarah couldn’t keep the sarcasm from her voice, not after the night she’d had.

“No. Someone just lost a class ring. Like one of the sorority girls.”

“Does that look like a woman’s ring? No. No is the answer. That is a man’s ring. An officer’s ring or something. That could be a real-life, true-blue Civil War artifact.”

“I doubt it. And if it is, we’ll return it. This is a national park. There are rules.”

“I say finders keepers. Let me see it better.” 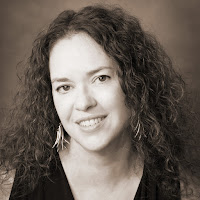 Lisa has always enjoyed reading about monsters, and now she writes about them, because monsters need love too.

She adores beasties of all sorts, fictional as well as real, and has a farm full of them in her southwest Missouri home, including: one child, one husband, two dogs, two cats, a dozen hens, thousands of Italian bees and a guinea pig.

She may or may not keep a complete zombie apocalypse bug-out bag in her trunk at all times, including a machete. Just. In. Case.

You can find Lisa at 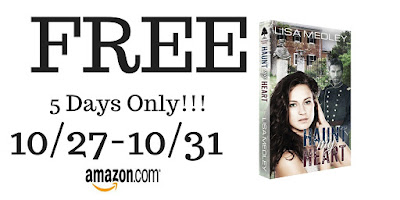