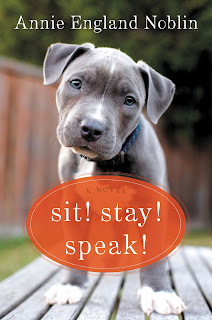 Echoing the novels of Mary Alice Monroe, Allie Larkin, and Holly Robinson, this charming debut novel tells the unforgettable story of a rescue dog that helps a struggling young outsider make peace with the past.

Addie Andrews is living a life interrupted. Tragedy sent her fleeing from Chicago to the shelter of an unexpected inheritance—her beloved aunt’s somewhat dilapidated home in Eunice, Arkansas, population very tiny. There she reconnects with some of her most cherished childhood memories. If only they didn’t make her feel so much!

People say nothing happens in small towns, but Addie quickly learns better. She’s got an elderly next door neighbor who perplexingly dances outside in his underwear, a house needing more work than she has money, a best friend whose son uncannily predicts the weather, and a local drug dealer holding a massive grudge against her.

Most surprising of all, she’s got a dog. But not any dog, but a bedraggled puppy she discovered abandoned, lost, and in desperate need of love. Kind of like Addie herself. She’d come to Eunice hoping to hide from the world, but soon she discovers that perhaps she’s finding the way back—to living, laughing, and loving once more.


She sighed and pushed her blond hair off her neck, piling it high on top of her head. Her thoughts went back to Chicago. To Jonah. To what life had been like before she’d inherited a house that needed more work than she had money. Jonah would have liked this house, she thought. Addie knew that if he were here, they would have stayed in town after the funeral. Jonah would have picked through each piece of furniture, each knickknack. He would have asked for stories about each one, stories Addie had long forgotten.

She rested her head against the coffee table. It had a glass top, something her aunt had brought all the way down here from Chicago. It wasn’t worth much, as far as Addie could tell, but her aunt loved it and stuck cards from relatives underneath the glass. Each time Aunt Tilda had a visitor, she’d tell them about whichever relative happened to be resting underneath that visitor’s coffee mug. Today there was no coffee, and there were no visitors. There was no Jonah. Addie let her hair fall back down onto her sticky neck and said out loud to no one, “I’ve got to get out of here for a while.”

The Mississippi River in Eunice, Arkansas, looked nothing like it had when she’d crossed the bridge in Memphis. It was smaller, tranquil almost. Addie stood with her toes touching the water. She hadn’t been down to the levee since the last time she’d visited Eunice. Even this close to the water, it was hot outside. She found herself wishing she’d just stayed inside with all the unopened boxes and dusty furniture—at least there was air-conditioning.

Gazing around, Addie realized that this was no longer the nice, clean picnic area that her aunt had taken her to during her childhood visits. The tables were overgrown with weeds, and there was an obvious odor of trash in the air. This place hadn’t been taken care of in a long time.

Addie bent down to wash out her flip-flops when she heard a noise coming from behind her. She turned around to face a small wooded area. The noise grew louder. It sounded like a whimpering, but all she saw were bushes. She shoved her feet into her shoes and walked over to the direction of the noise. She pushed her way into the first set of bushes, where a thin layer of trash covered the ground. Off to one side there was a large, black trash bag.

The trash bag was moving. Addie crept closer to the bag. She bent down and touched the plastic. It had been tied in a tight knot. Digging her fingers into the plastic, Addie ripped the bag wide open. The object in the bag stirred, whimpering slightly. It lifted its head and tried to move, but failed. It was covered in blood and blood-soaked newspaper and dozens of crumpled packages of Marlboro Reds.

Addie was looking at a dog. 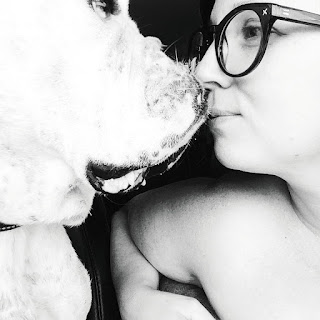 Author Info
Annie England Noblin graduated with an M.A. in Creative Writing from Missouri State University and currently teaches English for Arkansas State University. Her poetry has been featured in such publications as the Red Booth Review and the Moon City Review. She lives with her son, husband, and four rescued bulldogs in the Missouri Ozarks. In addition to her writing, Noblin started working with rescue organizations across the country ten years ago, and has never looked back. The work she does serves as an inspiration in everyday life, as well as in her writing.