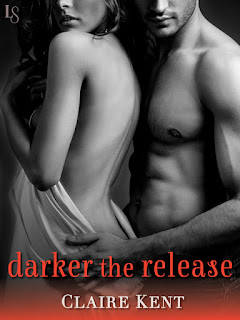 
Kelly Watson got involved with mogul Caleb Marshall for all the wrong reasons: namely, to prove that he murdered her father twenty years ago. But Caleb is hotter than hell, the sex is mind-blowing, and Kelly’s afraid that she’s falling for him despite her chilling suspicions. Now, the more time she spends in his arms, the more she risks betraying her identity and losing her heart. The only way out is to discover the truth before Caleb figures out who she really is.

Caleb’s feelings for Kelly are taking him into uncharted territory, replacing his weakness for call girls and one-night stands with a hunger for something real. Still, the ruthless businessman in him can’t resist looking into Kelly’s background. When his investigation suggests that he’s not the only one with something to hide, Caleb is forced to decide if he can trust someone who’s been telling him lies. For the first time, Caleb understands how intimacy can be so tempting—and, in the wrong hands, so dangerous.

Darker the Release is intended for mature audiences.


Excerpt
Acting as though she weren’t paying any attention to him and hiding her flush of pleasure at this clear evidence that he was so affected by her, she walked back to the closet to get her other dress.
This one was a deep red—a sleeveless column of fabric with well-tailored ruches and a slit on one side that came all the way up her thigh.
Caleb wasn’t talking much anymore—just occasionally saying “yeah.” She didn’t dare to look over at him fully, because he would suspect what she was trying to do.
But the brief glances she sneaked proved that his body had grown tense and his skin was slightly flushed.
He was turned on. No doubt about it. It gave her a rush of pleasure and relief—and also a pride that left her a little uncomfortable.
She was so focused on looking sexy as she tried to zip up her dress that she was at a loss when the zipper snagged on the fabric.
She tugged on it gently and then frowned, wondering how she was supposed to get it unsnagged and still look sexy.
She gasped and gave a little jump when she felt a hand over hers on the zipper.
Caleb had gotten up and moved behind her while she was distracted.
“Stuck?” he asked, his voice thick and textured the way it always was when he was turned on.
He was standing behind her, and his eyes were moving with a hungry heat from her face down her body in the mirror over the dresser.
“Try not to tear it,” she said as he focused back down on her zipper. “This dress was expensive.”
“It was well worth the money.”
With a little work, he freed the zipper and pulled it all the way up.
“Did you finish with your call?” she asked, glancing back to where he’d left his phone on the table next to the chair.
“You made sure of that, didn’t you?”
She made her eyes wide and innocent. “What do you mean?”
“You know exactly what I mean. You think I’m so easy that I’ll be manipulated by the sexy little show you just gave me.”
She glanced over her shoulder and down at his groin, where he was visibly aroused beneath the towel. She just cleared her throat, trying to hide a smile.
“That’s only a victory,” Caleb said, “if a man is led around by his dick.”
“And you’re not?”
“What do you think?”
She met his eyes in the mirror, and she felt the strangest twisting of fear, pleasure, and possession at what she saw in his expression.
“I think I told you on the first day we met that, by the time I was through with you, all your unrelenting alpha-maleness would be broken. I think I’m off to a good start.” She made sure her expression was teasing, almost taunting. They’d done this verbal dance from the beginning, and it was sometimes as exciting to her as his touch.
She had to be so careful, though, and not surrender completely to her feelings for him. She’d loved her father too much to sacrifice justice for him that way.
“Is that what you think?” As Caleb spoke, he pulled the zipper of her dress back down.
She glanced over at the clock. “We’re supposed to leave in five minutes.”
“Then I’ll have to prove my point quickly.”
Her breath was already quickening as he slowly slid her dress down to the floor, leaving her again wearing nothing but her heels and underwear. “What point?”
“That there’s nothing broken about me.”
She reached behind her to caress his hard cock through the towel, pleased when he gave a soft grunt. “It feels like you’re not going to hold out very long in this little show of strength you’re putting on.”
He took her wrist and pulled her hand away, planting it on the dresser. “Was that a challenge?”
“I know how you feel about those.” She gave him a teasing smile in the mirror.
She did know how he responded to a challenge—the same way she always had. She’d never met another man who could match her will, in bed or out of it. She could see the defiance smoldering in his eyes right now, and it triggered a matching reaction in her.
He might not know the real battle that would always be waged between them—the clash of mighty opposites, as Shakespeare had put it—but these smaller duels had always shaped their relationship.
So she was ready for him when he stepped forward, pressing his body into hers from behind and kissing the side of her neck.

Author Info
Claire Kent has been writing romance novels since she was twelve years old. She has a PhD in British literature and, when she’s not writing, teaches English at the university level. She also writes contemporary romance under the pen name Noelle Adams.
Website | Facebook | Twitter | GoodReads