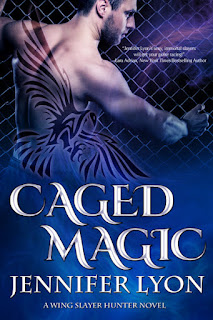 Risa Faden is a witch whose ultra-powerful shield magic is slowly breaking her mind. But when her beloved goddaughter is snatched by a demon, she’ll risk anything to rescue the baby—including lying to the handsome, intriguing stranger who has the power to help her keep her sanity, save the child…and steal her heart.

Linc Dillinger is a Wing Slayer Hunter whose sexy, rich, bad-boy charm hides a treacherous betrayal that left him emotionally scarred. As a result he risks his life to protect innocents, but is incapable of love—until he meets a beautiful witch who can save his cursed soul. Risa’s fierce courage and loyalty reaches past his barriers and he begins to believe she has the magic to free his caged heart.

But Risa’s lie explodes into dark danger that forces Linc into a hellish high-stakes gamble: He must either win the witch he loves and her godchild…or endure a loss that will destroy them all. 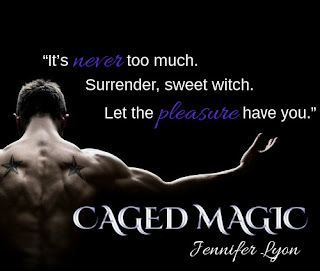 The ache he’d just satisfied tingled, heat spreading at the thought of him inside her. He’d been patient, seducing her, showing her she could trust them. Time for her to do her part. They both needed to seal the bond. But she’d never forget this moment with him.

Even when he hated her later for lying.

Anxiety edged in, but Risa held on to his gaze and slid her hand over his stomach. Jeez, the ridges of his muscles entranced her. The man felt as cut as he looked.

Focus. She knew how to do this. Reaching his belt, she—

He caught her hand. “Wait.”

“You feel the bird, right?”

She nodded. The sensation of the creature winging gently around her magic almost protectively resembled being hugged from the inside.

“He’s helping you harness the magic. Let’s see if we can find your girl, now. As long as you feel him, he’ll keep you safe.”

Startled, she stared up into his eyes filled with wings. This man constantly surprised her. “Don’t you want to break your curse?”

“Fuck yes. Even more than that, I want you, want to feel you, to take our pleasure together.”
“Then…” She tried to understand. Kendall was his ace card, the one he could play to make sure she gave him that. “Why wait?”

“Because more than all that, I want you to be free to choose, Risa. Right now, you’ll choose to do this for Kendall. And God, baby, I respect the hell out of that. But it’s not what I want.”

Confusion spiraled. “What do you want?”

His gaze pierced hers. “For you to do this because you want to, not because you have to.”

Hot tears threatened, and her chest ached. Why? Dear God, why did Linc, this man who’d endured being sold by his mother, caged and used in ways that she couldn’t fathom, why did he have to be so kind to her? 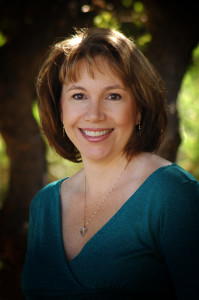 Jennifer Lyon, who also writes as Jennifer Apodaca, lives in Southern California where she continually plots ways to convince her husband that they should get a dog. After all, they met at the dog pound, fell in love, married and had three wonderful sons. So far, however, she has failed in her doggy endeavor. She consoles herself by pouring her passion into writing books. To date, Jen has published more than fifteen books and novellas, including a fun and sexy mystery series and a variety of contemporary romances under the name Jennifer Apodaca. As Jennifer Lyon she created a dark, sizzling paranormal series, and The Plus Once Chronicles, an emotionally sensual adult contemporary series. Jen’s won numerous awards and had her books translated into multiple languages, but she still hasn’t come up with a way to persuade her husband that they need a dog.

I can remember back in February of 09 when Blood Magic came out. I loved the idea of the Wing Slayer Hunters. It was slightly different then what was out there at the time. I really loved the first two books and then before I could read the next two (remember, I read so many different authors, sometimes I get behind) they stopped publishing the series. I'm not sure why, or who stopped...the author or publisher. I'm thinking publishers, they are like TV executives, give something one try and if it does work...move on.

Because they stopped the series I never went back and read the two I had. Of course I did like the series so I never got rid of them, in fact, when she published a novella for the series in 2012 I got it. At the time I thought the series was totally done, I didn't know she was going to publish it on her own, but being sick (that uncontrollable need to buy books by authors your not sure you'll ever read) I had to have it.

When I saw the tour for Caged Magic, I was both shocked and happy at the same time. I was also upset with myself because I hadn't kept up with the series and if you follow me regularly you know how I feel about reading out of order.

But for this book...I broke my own rules. (Forgive me!)

I'm so glad I did. Caged Magic got me hyped up for the series again. From the second I picked it up I couldn't put it down. The story was that good. It did take me a few minutes...and a visit to the authors website...to figure out who was who. But very quickly I got back into their world.

I wish I had never left.

Caged Magic reminded me what I love about paranormal romance. I haven't read as much lately but this book made my palms itch for more.

Both Risa and Linc are such great characters. They have more in common then they know at first. I enjoyed the dance they did. It broke my heart when Risa loses someone close to her in the book. (I'm not saying who. You know what you have to do...read the book!) I can here the groans now! So much happens within the story and more then one story line is in it but I happy to say you don't get lost. Everyone's story is their own.

I found myself more then once wanting to yell at the characters to stop acting the way they were. I because so invested in the story I almost forgot it wasn't real. I love that in books. That's one of the reasons I read.

For those of you who love paranormal, or just want to try it, I think you'll love the Wing Slayer Hunters series. I won't yell at you for starting with Caged Magic, but to truly enjoy the story get all five books, and one novella, and read the whole series. You'll then be ready, (unlike me) for when the next book comes out.

I can promise you this, I will get back to the other books. Now remember what I said, get this series. I'd love to hear from any of you who have read this series, or who just want to talk more about it. Happy reading! 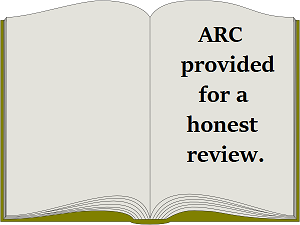 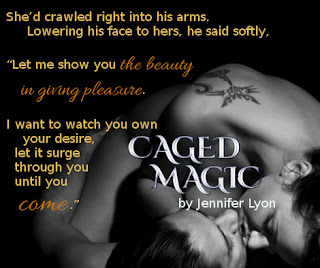 For more interviews and guest posts with Jennifer plus Caged Magic reviews & Spotlights stop by the tour every day!

The complete schedule can be found HERE!