Release Day & Review of Ever After by Rachel Lacey 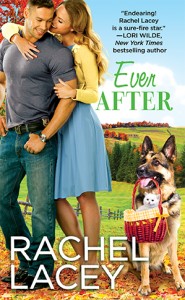 CAUGHT IN THE ACT
Olivia Bennett is not having a happy birthday. Instead of blowing out her twenty-nine candles, she's stuck in jail, caught red-handed in a graffiti incident that (perhaps) involved one too many strawberry margaritas. Worst idea ever. The only bright side is that she ended up in the strong arms of the most gorgeous lawman she's ever seen.

Pete Sampson (aka Deputy Hot Stuff) faces intense pressure from the sheriff to find out who's behind a string of vandalisms. And after her spray-painting spree, Olivia is suspect number one. Still, Pete can't stop thinking about her.Wanting her. Now he's torn between his duty and his overpowering desire for the vivacious waitress. But he may have to bend the rules because true love is more important than the letter of the law . . . 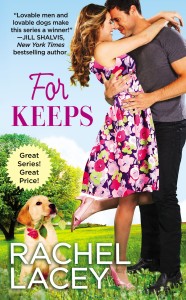 A SUMMER FLING . . . OR SOMETHING MORE?
Merry Atwater would do just about anything to save her dog rescue - even if it means working with the most stubborn man on the planet. It's hard to avoid the sparks that fly with TJ Jameson, the ruggedly sexy cowboy in charge of the children's camp where she's just taken an animal therapy job. But commitment is not Merry's style, and TJ clearly wants more than just a roll in the hay.

TJ Jameson isn't looking for anything complicated-just a peaceful life on his family's ranch with a wife and kids. "No-strings" Merry Atwater doesn't fit that bill, no matter how irresistible she is. But when he sees how Merry gets through to his autistic nephew and the other kids at Camp Blue Sky, TJ's a goner. If he doesn't give in to the now, he might just lose his shot at forever . . . 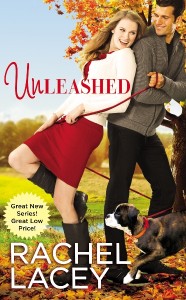 What happens when you find the right one at the wrong time?
Cara Medlen has a serious case of animal attraction. And it's not because of all the foster dogs she's rescued. She's got it bad for her incredibly sexy neighbor. Her one rule: Don't get attached. It's served her well with the dogs she's given to good homes and the children she's nannied. Yet the temptation of Matt's sexy smile might just convince her that some rules are made to be broken.

Matt Dumont doesn't need his skills as a private investigator to detect disaster on the horizon. Cara is everything he thought he'd never find-gorgeous, funny, and caring. But there's no way he can start a relationship just as he's about to move to another state. Talk about bad timing. As their attraction sizzles too hot to deny, they'll have to make a decision: forget the consequences and let loose, or forget each other and let go... 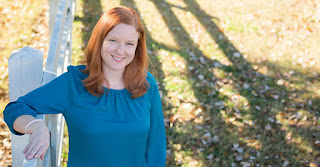 About the author:
Rachel Lacey lives in North Carolina, with her husband, son, and their own rescued pup. She volunteers her spare time with Carolina Boxer Rescue and truly has a passion for helping our furry friends. She is a member of the Romance Writers of America as well as her local Heart of Carolina RWA chapter.

Thanks for stopping by, today I'm reviewing Ever After by Rachel Lacey! If you haven't read her before you don't know what you're missing. She reminds me of Jill Shalvis and Susan Mallery. She creates wonderful stories that will keep you coming back for more.

Ever After is book #3 in her Love to Rescue Series.

The main thread of the series is the people rescuing the animals so if you don't really them in order it won't kill you. (I know, I usually don't say that.) Sometimes I break my own rules.

Up this time is Olivia Bennett and Pete Sampson story. I really enjoyed them.

Poor Olivia gets herself into a little bit of a pickle with the law that bring officer Sampson into her life. Best thing she ever did. Olivia really cares about the treatment of all living, breathing creatures. She is so lucky to have Pete on her side. Pete really does care about her. He stands for her when others push her aside.

I do wish we had more interaction with her and her mother. It felt like a dropped issue that we are only teased about. Her and her father have their moment, but nothing with her mother.

Now it's not only Olivia that has a few issues, Pete does too. He has a strained relationship with his father. Things happen in the book that I'm not telling you about but I think it's better to read about it yourself.

As a whole this is a wonderful book that I think you'll really enjoy. It has fun mail characters, and is well-written. Throw in two dogs, a feral cat, friends and family and you have a great story.

Of course it's not all sunshine and happiness, the story also have a little light mystery to it.

If you've read this series I'd love to hear your thoughts about it. Happy reading!

Don't forget to get Ever After, it's out today!