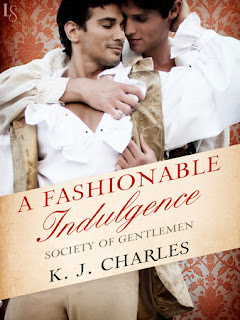 A Fashionable Indulgence
A Society of Gentlemen # 1
By: K.J. Charles
Releasing August 11, 2015
Loveswept

In the first novel of an explosive new series from K. J. Charles, a young gentleman and his elegant mentor fight for love in a world of wealth, power, and manipulation.

When he learns that he could be the heir to an unexpected fortune, Harry Vane rejects his past as a Radical fighting for government reform and sets about wooing his lovely cousin. But his heart is captured instead by the most beautiful, chic man he’s ever met: the dandy tasked with instructing him in the manners and style of the ton. Harry’s new station demands conformity—and yet the one thing he desires is a taste of the wrong pair of lips.

After witnessing firsthand the horrors of Waterloo, Julius Norreys sought refuge behind the luxurious facade of the upper crust. Now he concerns himself exclusively with the cut of his coat and the quality of his boots. And yet his protégé is so unblemished by cynicism that he inspires the first flare of genuine desire Julius has felt in years. He cannot protect Harry from the worst excesses of society. But together they can withstand the high price of passion.

Excerpt
Silas made a face. “Alexander Vane married Euphemia Gordon. You were born a Vane, you lived as a Gordon, not hard to make the link. It doesn’t make a difference, lad. They’ve nothing, or they’d have arrested you by now. Keep a closed mouth and no harm will befall, understand?”
“Right.” Harry felt a sinking sensation in his gut. “Yes. Right. Uh, Silas . . .”
There was a short pause.
“Hell’s tits.” Silas took his hand off Harry’s shoulder. “What did you do, you bloody fool?”
“Nothing!” Harry protested. “Really, it wasn’t much.” He swallowed, aware this would not sound impressive. “I was in the Spotted Cat—”
“Were you tupping the barmaid?” George asked eagerly.
“No.” Harry had, a few times, and he’d hoped to do so again last night, but he’d found himself rejected for a man with a catskin waistcoat and a pocketful of silver. “I went for a jug of ale and a man bumped into me. Spilled my drink. Bought me another.”
“For Christ’s sake.” Silas growled in his throat. “How many drinks?”
A lot. Much of it gin. Harry had had the devil’s own head all day, but that was nothing compared to the lurking fear that he’d said something he shouldn’t. “Uh, a few. We talked, idly.” Silas gave him a look of combined exasperation and resignation that made Harry flush. “I didn’t say anything of importance! Nothing about here. Just, uh, about my travels on the Continent.”
“Did you tell him who your parents were?”
“No.” Harry swallowed. “But I did say that they were . . . political.”
“Blast you, Harry.” Silas put his hands through his cropped, grizzled hair. “Who was this fellow?”
“I don’t know. He had red hair, like a Scotsman, but an English voice. Slim. Brown eyes. He said his name was . . . something odd, what was it . . . Cyprian? Do you know him?”
Silas shook his head. “If he’s an informer, he’s a new one. No less dangerous for it. You’re a damned fool.”
“I’m sorry. I just wanted a drink.”
Harry sounded plaintive. He felt plaintive. Since the cholera had taken his parents and left him orphaned in Paris, aged seventeen and a known democratic agitator, life had been hand to mouth. He’d returned to London, hoping things might be easier there, but men and women were out of work across all of England thanks to the new machines, the endless taxes, and the war. There had been no work for a friendless youth. He’d had only the old radical crowd to turn to, and that was no great comfort, with the law ever harsher against them.
Harry hadn’t wanted to be a radical again. He didn’t want the fight, the fear, any of it. But his heart had lightened with that old boyhood feeling—or, rather, illusion—of safety when he’d come back to Theobald’s Bookshop for the first time in more than a decade. When he’d walked in and seen Silas there, grizzled and lined now as befitted his forty years, but still thick-muscled and indomitable, still setting his face against the world, it had felt like coming home.
Not an easy home. Silas’s rough, powerful embrace, once he recognized the hungry young man in Frenchy rags, had been all the welcome Harry could have hoped for, and he’d given Harry work and what wages he could without question, but he would never be a comfortable man to live with. It didn’t surprise Harry that nobody dared try.
Silas was glaring at him now as though it were a crime for a man to seek a jug of ale and a warm body to hold. Harry hadn’t even had the latter, since the barmaid had preferred coin to compliments.
It had crossed his mind last night that his drinking companion, the fellow Cyprian, might be amenable. Harry wasn’t at all averse to a man in his bed when he couldn’t have a woman, and Cyprian was quite appealing in a foxy sort of way, except for that dreadful hair. Thank God that, even in his befuddled state, Harry had decided not to make an approach. Sedition was bad enough; sodomy could see a man hanged.
“Nothing happened. I’m sure I didn’t say anything important,” Harry told himself as much as Silas. “It was probably innocent. Just a man wanting company.”
Silas grunted. “Well, we’ll face trouble when it comes. Enough of this nonsense, back to work. Watch your back. And don’t sup with strangers again.”

Romancing the Readers would like to thank K. J. Charles for visiting with us! Show her some love!

My new book, A Fashionable Indulgence, is the first of a trilogy set in 1819-20. This is a remarkable period in English history, which you don’t tend to see in Jane Austen adaptations on TV.
England was in turmoil at the end of the Regency period. The Industrial Revolution and the aftereffects of the Napoleonic Wars had caused widespread poverty, political unrest, and popular demands for change.
The government of the time was openly preoccupied with maintaining the power of the incredibly wealthy few at the expense of pretty much everyone else. People were literally starving in the streets, while the rich lived in unimaginable luxury and gambled fortunes on such subjects as which of two raindrops would reach the bottom of a windowpane first. (On that famous occasion the sum wagered was equivalent to about $200,000 now. Yes, I meant all those zeroes. Yes, on a raindrop.)
It turned to violence, inevitably. In August 1819 a huge but peaceful crowd of protesters for parliamentary reform were charged down by sabre-wielding cavalry sent in by frightened magistrates, killing around 14 people and injuring more than 500. There was popular outrage at what was quickly dubbed the Peterloo Massacre; in response the Government introduced the Six Acts, perhaps the most repressive legislation ever passed in the UK, aimed at stamping out protest meetings and writing against the regime.
And through it all the aristocrats danced on, in their glittering existence of balls, silks and scandal.
The Society of Gentlemen trilogy is set between these worlds, with the wealthy few clinging to power, and the radicals fighting for change. In A Fashionable Indulgence, young radical Harry Vane discovers his noble birth and is lifted out of poverty into the clubs and ballrooms, with dandy Julius Norreys helping him to become a gentleman. Harry must learn proper behaviour, conceal his past, and make a good marriage, all the while keeping his hands off the icy exquisite who’s teaching him. Unfortunately, it’s not as easy as all that…

Author Info
K. J. Charles is a writer and freelance editor. She lives in London with her husband, two kids, an out-of-control garden, and an increasingly murderous cat.