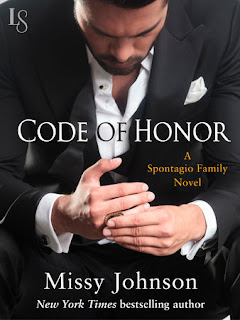 In a series debut for fans of Tracy Wolff and Sylvia Day, New York Timesbestselling author Missy Johnson asks a burning question: What happens when love is undeniable—and taboo?

Pietro Gustovi is loyal, polished, and hard as stone, the kind of guy women want and men respect. At twenty-three, he’s survived tragedies that would break men twice his age. And he owes it all to his father’s closest friend, Giovanni Spontagio, who took him in as an orphaned teenager. Pietro would give his life for Giovanni . . . but his heart belongs to Giovanni’s daughter.

Raised in Chicago under the spotlight of power and privilege, Lucy Spontiago feels most alive on stage. Determined to become a prima ballerina, she escapes her father’s protective gaze long enough to audition for the ballet in New York City. Soon, however, Lucy realizes that she is not alone. Pietro is watching her back. And though he’s like a brother to her, Lucy cannot deny the thrill she feels knowing his eyes are on her.

Pietro could never betray his mentor by sleeping with his only child. But Lucy follows her passions, no matter how forbidden. Soon their nights are consumed by explosive, red-hot temptation—a dance that will expose shocking secrets and burn everything else to the ground.

I can’t believe I’m doing this.

My hands shake as I sit down on the floor and begin my stretches. I glance around, taking in the hundreds of girls who are here for the same reason as I am. To follow their dreams and perform with one of the top ballet companies in the world. This is every little girl’s dream.

Who am I kidding? I don’t even know why I’m here.

Wait, yes I do. I was unwittingly roped into coming here by my supposed best friend and my number one fan, Bella. If I trip over my clumsy feet and make a fool of myself, I’ll never forgive her.

When I found out she’d filled out the application on my behalf I’d been so annoyed that I refused to speak to her for days, but now sitting here, about to perform, I’m thankful that she believed in me that much.

Since I was a child, the only constant in my life has been my dancing. It sheltered me from the pain of watching my mother succumb to cancer. It gave me hope when all felt lost. I couldn’t imagine doing anything else with my life but at the same time I was plagued with self-doubt. I was constantly comparing myself to others, always convinced I’d never be good enough.

“Luce, if you don’t try, how do you know what you’re capable of?” Bella had said after I’d received notification of my audition date. I’d screamed at her for applying on my behalf, but what she was saying made sense. If I wanted to do this, I needed to know I could. How could I expect others to believe in me if I didn’t believe in myself?

My heart jumps as I get to my feet. I run my hands down over my smooth tights, trying to focus only on getting inside that room. I walk in and smile at the line of officials. Some I recognize as well-known choreographers and dancers, some I don’t know at all.

I nod and position myself in the center of the room. I’ve been to auditions before, but none this important. The next few minutes had the ability to completely change the course of my life. No pressure, right?

Just dance like you’re the only one in the room.

I knew my chances of being accepted into this company were extremely low, no matter how outstanding my results were from college, or how many local productions I’d excelled in, and for a brief moment I want to kill Bella for setting me up for what was bound to be the ultimate failure.

If you keep thinking like that you don’t deserve a place.

Closing my eyes, I take a deep breath and begin to dance as the soft notes of Bach fill my head. I forget where I am, and just like that, I’m back dancing in the studio my father built for me after I begged him for somewhere to dance.

Every day and every night I’d spend hours practicing in my studio, with the help of one of the best instructors in Chicago. Who said money couldn’t buy happiness? If there was one thing my father was good at, it was ensuring his little girl had everything she wanted.

Author Info
Missy Johnson is a New York Times and USA Today bestselling author who lives in a small town in Victoria, Australia, with her husband and her confused pets (a dog who thinks that she is a cat, a cat who thinks he is a dog . . . you get the picture). When she’s not writing, she can usually be found looking for something to read. 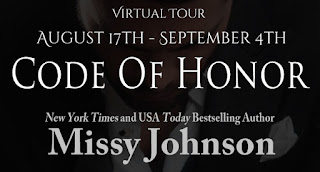