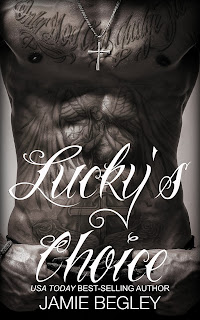 Lucky had always led a life of service, always putting his life on the line for someone else, managing to survive by pure luck and skill. After bringing an end to a multi-state drug ring, he was finally able to live the life he had wanted as a Last Rider.

A good man would walk away and not touch the curvy woman who had been tugging on his heartstrings. Lucky wasn’t a good man. Therefore, the bad-ass biker in him had a choice: once again become the man he had pretended to be and stake his claim or take the devil’s highway.

Some girls had all the luck.

Willa wasn’t one of them. All she wanted to do was give a home to the children she had made orphans. Instead, she found herself needing help from the man who had left the pulpit behind to embrace a life of sin.

Painfully shy and withdrawn, she wanted a quiet life, a simple man, and well-behaved children. The last thing she had ever expected was for Lucky to want her size twenty body and show her a passion that would lead her straight to hell. 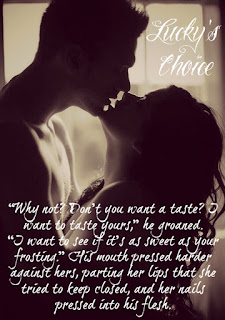 “Did you see who did this?” Lucky heard the accusation in his own voice, but it was too late to regain his temper as Willa paled. He was having a shit time with women so far today.
Willa walked toward him, the five children following behind her.
“Is something wrong …?” Her words trailed off as her eyes caught sight of his bike.
“We just came outside. Chrissy and Caroline saw a stray cat when they were playing outside earlier. They wanted to feed it…”
Lucky’s eyes went to the tabby cat at the side of Willa’s house that was contentedly eating tuna from a can. Then he studied the children. “Are you sure you didn’t hear or see anything?”
“Jenna’s house is closer to your bike. It would be easily seen from her living room window. If you didn’t see anything, why would we?” Willa said.
Lucky’s face turned red in embarrassment and anger at her logic. “Because I’m not the one who’s constantly looking out the window.”
Once again, Willa was the one turning bright red. “I’ll go get something to clean the paint off.”
She hurried inside her house, leaving him alone with five kids staring at him with varying expressions—from the overtly hostile glares of the two older girls to the three younger ones scowling at him.
“We didn’t see who touched your bike,” Leanne stated, staring him directly in the eyes.
Lucky knew the children fairly well from when he had been undercover as pastor. Leanne and Sissy were sisters; their mother Georgia had been a member of his congregation who had recently been killed when she was incarcerated for setting a fire in The Last Rider’s clubhouse. Shade and his wife Lily could have easily died if not for the precautions that Viper, the club president, had taken.
“I just asked if anyone had seen anything, Leanne. Maybe one of you put the other up to doing it?”
A firestorm was unleashed at his words.
“We don’t put each other up to doing stuff that will get us in trouble!” Sissy snapped. The oldest girl, at seventeen, had been hit the hardest by her mother’s death.
Lucky guiltily admitted to himself that he was wrong. This wasn’t a prank a kid would play.
“What does the word mean?” Charlie, the eight-year-old, questioned as he held his younger sister Caroline’s hand while his other sister, Chrissy, stared at him, sucking her thumb.
The three younger children Willa was fostering were Lewis’s, Georgia’s brother, who had also been raising his nieces after her death. Lewis had been determined to marry Willa to help care for his large family. The sick bastard had gotten his wish; he just wasn’t around to benefit from it. Willa had shot and killed him when he had come to her house in a rage and attacked not only her but also Rachel, who had tried to help her.
“It means that Pastor Dean isn’t acting like a pastor anymore.” Sissy smirked at him.
Lucky knew her age and recent difficulties were responsible for her attitude, but it didn’t keep him from snarling back at her. “You have a problem with me, Sissy?”
“I have a problem with you treating Willa the way you just did.”
“Willa needs to learn to take up for herself. She doesn’t need another person taking up for her. Certainly not a seventeen-year-old.”
Caroline’s foot kicked out, striking him in the leg.
“Stop it!” Lucky had long since lost control of the embarrassing situation. 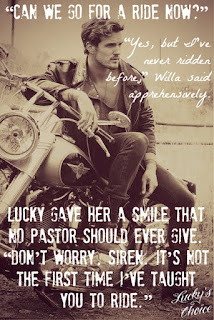 Author Info
"I was born in a small town in Kentucky. My family began poor, but worked their way to owning a restaurant. My mother was one of the best cooks I have ever known, and she instilled in all her children the value of hard work, and education.
Taking after my mother, I've always love to cook, and became pretty good if I do say so myself. I love to experiment and my unfortunate family has suffered through many. They now have learned to steer clear of those dishes. I absolutely love the holidays and my family puts up with my zany decorations.
For now, my days are spent writing, writing, and writing. I have two children who both graduated this year from college. My daughter does my book covers, and my son just tries not to blush when someone asks him about my books.
Currently I am writing five series of books- The Last Riders, The VIP Room, Predators MC, Biker Bitches, and The Dark Souls.
All my books are written for one purpose- the enjoyment others find in them, and the expectations of my fans that inspire me to give it my best.”