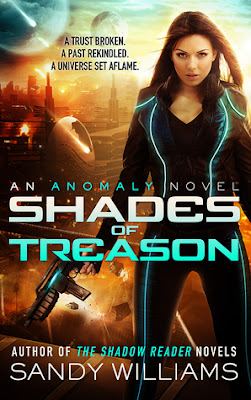 Shades of Treason
(An Anomaly Novel, #1)
By Sandy Williams

Ash would have given her life to save her teammates.
Instead, they gave their lives to save hers.

Lieutenant Ramie Ashdyn is an anomaly, a person whose genetic makeup makes her stronger and smarter than the average human. She’s pledged her life to protect the Coalition, an alliance of thirteen planetary systems, but when a top secret operation turns bloody, she’s charged with treason and the brutal executions of her teammates.

The Coalition needs the information Ash’s team stole on their last mission, so they send in Commander Rhys “Rest in Peace” Rykus to get it. He’s the man who’s responsible for turning Ash into an elite soldier... and he’s a man who isn’t, never was, and never will be in love with the woman he trained. Or so he tells himself.

Ash wants nothing more than to clear her name and be the woman her former instructor wants her to be, but the enemy who killed her teammates did more than frame her for treason and murder: they telepathically silenced her mind, preventing her from saying anything that might point to the truth about what happened.

Now Ash is trapped and set to be executed, the truth dying with her. Unless she can prove her innocence. But taking that path could destroy the Coalition she’s sworn to preserve and protect...

“Please.” Ash’s voice was so raw, so striated with emotional pain, that Rykus wasn’t sure if the jolt he felt through his heart was her will breaking or his.

But the word was a submission, complete and irrevocable. All her walls were down. She was pleading for his help.

She was pleading for his help, and he was hurting her.

He released the pressure on her arm.

A moment passed. Then another. Then Ash’s green eyes opened.

She stared at him.

He stared at her.

It felt as if he’d been sucked into another dimension, one where the loyalty training had flipped the axis of the universe. Instead of her being bound by his wishes, it was the other way around. She held his free will in her hands. He could feel it missing in the center of his chest. His heart beat within the hollow space, lost, unable to orient itself, but one command, one word from her, could make everything right again.

Her lips parted. No sound came out, though he waited for it, waited for some command he could carry out for her.

Is this what it felt like to be a loyalty trained anomaly? He wasn’t in control. He wasn’t thinking reasonably. If he had been, he wouldn’t have been this aware of how her body fitted with his. He wouldn’t have been able to picture himself lowering his mouth to hers. He could almost taste her. He wanted to taste that beauty mark to the right of her lips.

He allowed himself one weakness. He drew his thumb over the small, dark spot. It was real. As real as the woman lying beneath him. He’d seen Ash naked once before. He’d tried not to focus on her body back then, but he wanted to focus on it now. He wanted to take his time surveying every inch of it.


And he wanted her beneath him, vulnerable to his touch, his presence. Ash was always in control of herself. He wanted to see her shatter…
About The Author
Sandy Williams has lived and breathed books all her life. When she was a teen, she was always the first to finish her class assignments so that she could read as much as possible before the bell rang. Her grades didn't suffer (much), and she was able to enroll in Texas A&M University. She didn't sneak in novels there, but her college lecture notes are filled with snippets of stories. After she graduated, she decided to turn those snippets into novels.

Sandy writes books with high-octane action adventure infused with a strong romantic element. She is best known for The Shadow Reader novels, an urban fantasy romance series about a human who can both see and track the fae. When she’s not reading or corralling her twin boys, she enjoys playing EuroGames like Dominion, 7 Wonders, and Agricola.

You can find Sandy at