Guest Post & Giveaway: Turn Up the Heat by Serena Bell 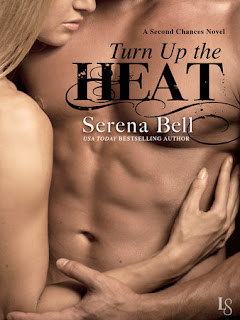 Aspiring chef Lily McKee noticed Kincaid Graves the first time he walked into the dingy diner where she waits tables. With his ice-blue eyes and primal tattoos, his presence puts Lily on edge—and reminds her of all the unfulfilled longings she isn’t pursuing while she’s stuck in this dead-end job. Without a doubt, the man is dangerous to her long-term plans of leaving town and hiring on at a real kitchen—and yet, she hungers for him, if even for just a taste.

Kincaid didn’t come back to his coastal Oregon hometown looking for a good time or a good meal. The ex-con has a score to settle, old wrongs to set right. But Lily, equal parts innocence and insight, brings out an impulsive side of him he thought he’d left behind in the past. And it only takes one intense moment of weakness between them to make him consider the possibility of an entirely new future—and the promise of passion beyond either of their wildest dreams.


Romancing the Readers welcomes Serena Bell! Thanks for visiting with us!

I’m thrilled to be visiting Romancing the Readers as part of my Turn Up the Heat blog tour. Thank you so much, Ann for inviting me today!

Turn Up the Heat is the story of Lily, a waitress whose culinary school training is languishing in a seaside town diner, and Kincaid, who has just been paroled from maximum security prison for the crime of trying to protect the woman who raised him. Lily recognizes something kindred—and rough—in Kincaid, and the two form a sizzling hot and bone-deep connection. But both Kincaid and Lily have to find a way to move past old mistakes if they want to find a future together.

I thought I’d talk a little bit today about building a character, specifically the parts of a character that grow out of problem-solving. There are parts of Lily and Kincaid that just “are who they are,” aspects of them that arose from sheer inspiration. But there are also character traits that are answers to questions I asked myself as I was writing the book. Here’s an example:

As I was writing, I realized I had to think about how Kincaid might have been able to survive, relatively unscathed, in maximum security prison. As you probably know from movies and books, or even from having a friend or relative on the inside, it’s a jungle in there, and survival of the fittest prevails.

So I made Kincaid big, physically intimidating, the kind of guy who could reasonably bulk up and make an unappealing target. That fit with who I imagined Lily would be attracted, too, anyway, but it also gave him a better chance of survival. I made him savvy, able to keep his cool under pressure. But I still knew he needed something else.

You survive in prison if you’ve got something other people want—cell phones, food, drugs, cigarettes, etc. I wanted to keep Kincaid as above-board as possible—after all, I was already trying to rehab him from having committed a violent crime—so I thought about what he could have that other prisoners might want—and realized that he was probably a jailhouse lawyer—a guy who’d schooled himself in criminal law so he could help his fellow inmates fight bureaucracy and appeal their convictions.

From there, lots of other aspects of Kincaid came into relief—his close friendship with his own lawyer, who’d helped teach him the rudiments of criminal law before prison and who’d fixed him up with a “protector” inside; his fascination with law and desire to pursue a degree; the fact that he’d spent seven years in the pen without losing all of his humanity. In fact, it wasn’t really until the jailhouse lawyer piece fell into place that I really knew who Kincaid was, and after that, the book started to gel.

Almost every character I write has parts of character that seem to grow organically, and the parts that emerge from problem solving. It’s one of the things I love most about writing—getting to watch characters develop in both these ways.

USA Today bestselling author Serena Bell writes stories about how sex messes with your head, why smart people sometimes do stupid things, and how love can make it all better. She wrote her first steamy romance before she was old enough to understand what all the words meant and has been perfecting the art of hiding pages and screens from curious eyes ever since—a skill that’s particularly useful now that she’s the mother of two school-aged children.