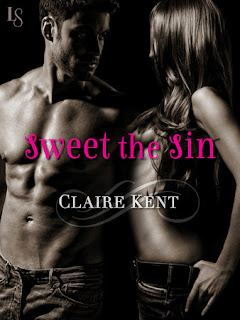 In the first novel in USA Today bestselling author Claire Kent’s deeply sensual story of love, lust, and deception, a woman searching for the truth discovers that she’s sleeping with the enemy.

Portrait artist Kelly Watson keeps her relationships simple and steamy, with no strings attached. She’s had a hard time trusting other people since she was a child, when her father was murdered for trying to blow the whistle on corporate corruption. Nearly twenty years later, Kelly finds herself in the arms of a seductive stranger—the very same man who may have ordered her father’s death. And even as she plays him, using hot sex as a means to revenge, Kelly is tormented by one question: Is she committing the ultimate betrayal?

Caleb Marshall has spent decades forging a high-powered career, rejecting intimacy for the convenience of fast women and cheap thrills. But Kelly intrigues him, pushing commitment buttons he didn’t know he had. Still, something is wrong. Despite their physical and emotional chemistry, Caleb feels the fear inside of her. Now the only way to keep her safe is coming clean, before secrets and lies destroy their connection—no matter how deep, intense, and addictive it may be.

Excerpt
“Pet portraits?” the man asked skeptically, with that same smug laughter in his eyes.
“What’s your point?”
“Nothing. You’re just that type, aren’t you?”
“What type?”
“Pet portrait artist. At one with the universe. Lover of flowers and trees and all furry creatures. Filling the world with pretty objects and warm fuzzies. I bet they call you Blossom, don’t they?” His tone was bone dry, as if far above such sentiment.
He probably was. She could tell even from their brief interaction that he was too intelligent, too experienced, too competent to have patience with anything trite or saccharine.
She liked that about him. Despite her intentionally bohemian appearance just now, she was as far as possible from those feelings herself.
“You don’t know me at all,” she said, pleased at the cool aloofness of her tone.
It just made him smile. When his dog lay down with the Frisbee, panting blissfully, the man started walking toward him, evidently expecting Kelly to fall in step with him. “I know a little about you. I know you paint pet portraits. I know you’re wearing vegan sandals and are reluctant to cut your hair. And I know you have on your bracelet various charms of dogs, cats, birds, and flowers.” He arched his eyebrows. “I think I’ve got a pretty clear sense of you.”
The bracelet was stupid, but her clients always liked it, and her hair was indeed very long, hanging down to the small of her back. But this arrogant man couldn’t be more wrong.
He might be eerily observant, but he knew nothing.
“Is that right?” she replied, giving him arched eyebrows in response. “You might be surprised about me. But there’s no way I’d be surprised about you. I’d know your type in my sleep.”
“Blossom, you could know my type in your sleep, if you asked nicely.”
She felt another tingle of excitement at the sexiness of his tone but ignored it. “You wear a suit to work every day, don’t you?”
“What does that have to do with anything?”
“Nothing. It’s just your type. You’re one of those guys who wears a business suit like armor—going through the world as if the nameplate on your office entitles you to whatever you want. As if your bank account makes you superior.”
The words weren’t particularly gentle, but he looked interested rather than offended. “What makes you think I have anything impressive in my bank account?”
“Please. I know roughly how much that watch you’re wearing costs.”
Because of the Watsons, her adoptive parents, Kelly was in good shape financially, but she didn’t own anything except her car that cost as much as the watch he was wearing.
“And I bet you’re wondering why would I spend money on something so superficial when I could be donating it to all the homeless animals in the world?” Again, he was teasing in that intimate way, as if he really did know her.
“I’m not like that,” she told him, speaking only the truth.
“Sure you aren’t.” He flashed her a grin. “What happened to your client, anyway?”
Kelly had actually forgotten about her client, so absorbed in the conversation had she been. She gave a little jerk and turned back to scan the park, focusing on the entrance, but there was no sign of another man with a German shepherd. “I think I’ve been stood up. It happens sometimes.”
Just then, her phone chirped with another text, so she reached in to pull it out of her bag. “Maybe that’s him.”
When she focused on the screen, she realized it wasn’t her client. Are you sure? I’d make it worth your while. Promise.
She sighed. Jesse. Why the hell wouldn’t he just give up?
“Not your client,” the man beside her said.
She glanced up. “How do you know?”
“I’m pretty good at reading expressions. Who is it? Your boyfriend being annoying?”
He was actually quite close. Impressive, given that they were strangers. “No. Just a guy who won’t take no for an answer.”
“He has my sympathy.”
She sucked in a breath. “Why should he have your sympathy?”
He had that smug, heated amusement in his eyes again. “To get a taste of a hot little thing like you—and then get the door slammed in his face? Can’t help but feel sorry for him.”
“I didn’t slam the door in his face. I was nothing but honest with him. He’s the idiot who ignored what I told him and keeps bumbling on toward something he already knows he can’t have.”
The man chuckled and reached out to run his fingers gently down a long strand of her hair. “It doesn’t matter what you tell him, blossom. You’ve got this gorgeous, untouched sweetness about you. It’s like a promise and a challenge.”
Her whole body went hot at the texture of his words, at the tension and power she could feel in his hand, his shoulders, his gaze.
She knew what he was referring to. She’d been born with clear creamy skin, pink cheeks, big blue eyes, and a heart-shaped face that gave the impression of innocence. There was no way she could dress that would change her natural look, even though she’d desperately tried when she was younger.
“Don’t assume the way I look is the way I really am,” she said, her pulse starting to throb in her wrists and her throat. She knew how to recognize the look in this guy’s eyes.
He wanted her.
And despite his smug superiority—or maybe because of it—she wanted him too.

Romancing the Readers would like to welcome Clair Kent! Please show her some love for stopping by!

Inspiration for Sweet the Sin

I got the first vision for Sweet the Sin after watching The Thomas Crown Affair (the 1999 remake with Pierce Brosnan and Rene Russo). It’s strange because my story is absolutely nothing like the movie, but that’s when the idea first came to me. I watched the movie several years after it originally came out, and the thing that prompted the story idea was the way the two leads were such great rivals—and on such equal footing in terms of intelligence, maturity, and experience. Their interaction was so fun and clever and balanced, and I really liked that. I got the idea for a story where the heroine enters the scene as some sort of rival and is immediately a match for a powerful man.

From there, the story idea got more and more complex. They wouldn’t just be rivals. She would have to be successfully deceiving him in some way. The only way that would work was for her to have good motivation for the deception, which meant he had to have done some serious damage to her in the past. And it couldn’t be that he just broke her heart. The damage had to be significant—which is where I got that idea that she believes he is responsible for the death of her father.

At that point, the story became a revenge romance, where Kelly is seeking revenge against Caleb for the death of her father and using any means necessary to make that happen, including having sex with him to get close. Once the story idea morphed into revenge, then immediately Hamlet became an influence. There’s a great quote from Hamlet in the play when he’s justifying to Horatio why he sent Rosencrantz and Guildenstern to their deaths. He says, “’Tis dangerous when the baser nature comes / Between the pass and fell incensèd points / Of mighty opposites.” What he means is that people need to be careful when they get in between a duel of powerful opponents, because they’re likely to get hurt. That was exactly the story I wanted to tell—starting from the first spark of an idea with The Thomas Crown Affair. It was a story of “mighty opposites”—powerful opponents—who are so similar and so equal that it’s hard to know who will win or even who to root for.

So Kelly and Caleb became intelligent, determined characters, both of whom are jaded, cynical, and sexually experienced. Both of them are expert liars, and both of them are used to manipulating people. But both of them are also emotionally damaged, which makes them sympathetic and human as they stumble through the difficult steps of the first intimate relationship they’ve ever had.
The finished product isn’t much like The Thomas Crown Affair at all, but that was where I got the first vision for it in my head.

Author Info
Claire Kent has been writing romance novels since she was twelve years old. She has a PhD in British literature and, when she’s not writing, teaches English at the university level. She also writes contemporary romance under the pen name Noelle Adams.