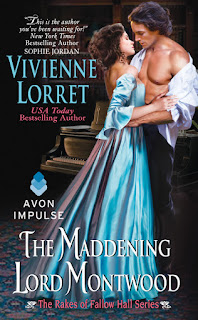 Blurb
Frances Thorne learned at an early age to rely on herself. Yet, losing her job and her home and watching her father carted off to debtor’s prison all in one day, is too much for her to bear alone. When a generous offer of assistance falls into her lap, she ignores her better instincts and decides to take a chance. The last thing she needs is for the infuriating Lord Lucan Montwood to stand in her way.

The end of the bachelors’ wager is near, and Lucan Montwood can taste victory. Yet, on the precipice of finally gaining freedom from his debts, he’s incensed to learn that the beautiful Frances Thorne has fallen into an insidious trap in the guise of a new position. Lucan can’t deny the way her lips call to him and knows he must risk his own future to ensure her safety.

Convincing her to trust him is the hard part and resisting her is next to impossible. But falling in love with her? That’s far too simple.

Excerpt
“While I admire the stern workday countenance you employ to set an example for others, using a little smile in the market could do wonders for your basket.”
He was talking about flirting. Flirting was one thing Frances never did. She’d seen how a friendly smile could give a man the wrong ideas. In her opinion, it was far better to know the character of the man beforehand. “I suppose you would have me remove my spectacles and bat my lashes as well.”
Lucan turned to face her. Slowly, he revealed a grin that only hinted at the dimple lurking there. It hinted at other things too. Scandalous things. She was certain of it because a ripple of desire stirred inside of her.
“No, Miss Thorne, always wear your spectacles.” He leaned forward, the brim of his hat close to hers. “They act like a veil, making a man wonder about the eyes behind them. A man starts to imagine being the one who’ll steam up your lenses.”
~

Romancing the Readers would like to thank Vivienne Lorrett for stopping by today! Thanks for visiting with us!

Thank you for having me here today!

How do you create a new series?

Great question! The first step is to get excited about the characters.

With The Rakes of Fallow Hall, I already knew the gentlemen involved, because they’d each appeared in The Wallflower Wedding series. Gabriel (The Elusive Lord Everhart) made his debut as Griffin Croft’s sparring partner in Finding Miss McFarland. Rafe (The Devilish Mr. Danvers) whistled his way through his sister’s book, Daring Miss Danvers. And Lucan (The Maddening Lord Montwood) incited jealousy and earned death threats in four previous books: Winning Miss Wakefield, Finding Miss McFarland, The Elusive Lord Everhart, and The Devilish Mr. Danvers. So, of course, I couldn’t wait to write each of their stories.

The next step is to build a world.

This step requires shopping for office supplies: new pens, pencils, Post-its, a 3-ring binder, a small bedside notebook (for middle-of-the-night inspiration), a large 3-subject notebook, and tea. Lots and lots of tea. And maybe some new yarn. I mean, if I’m going to leave the cave, I might as well make a day of it, right?

Upon returning to the cave, high on the scent of new paper and chai, I’ll greet Pinky (my pink laptop) with a grin and then start searching for images that fit my world. During this process, questions spring to mind: Will my characters live in a summery country manor or in an ancient castle in winter? Will my heroine need a gown for a ball? Will my hero own a phaeton or ride on horseback instead? Then, before I know it, I not only have a world, but I also know more about my characters.

The next steps involve research, family trees, creating conflict, deciding how these books are linked, etc.

This is where the 3-ring binder, and my adapted library database/archive/Googling skills come into play. I also use an enormous whiteboard to keep everything straight. Of course, I could use a computer program instead, but the whiteboard allows me the freedom to jot down a quick fact without needing to open up a separate file on the computer, which would likely lead me on the path of distraction.

Research? Check.
By this time, I know my characters, their family members, friends, likes, and dislikes. Not only that, but I’ll have a sense of where to begin their story, and how all the books are linked. And poof! A new series is born.

Wishing you a great day and happy reading! 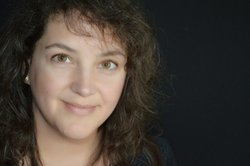 Author Info
USA Today bestselling author VIVIENNE LORRET loves romance novels, her pink laptop, her husband, and her two sons (not necessarily in that order ... but there are days). Transforming copious amounts of tea into words, she is proud to be an Avon Impulse author of works including: “Tempting Mr. Weatherstone”, The Wallflower Wedding Series, and the Rakes of Fallow Hall series.