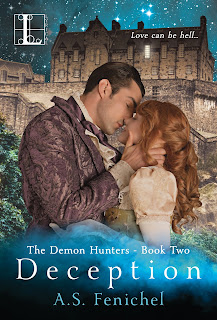 When Demons threaten Regency London, only a Lady can stop them.

Lillian Dellacourt is beautiful, refined and absolutely lethal. She’s also the most feared and merciless demon hunter in The Company. She’s come a long way from the penniless seamstress’s daughter sold to the highest bidder, and it wasn’t by trusting a man, let alone an exiled Marquis with more on his mind than slaying the hellspawn . . .

For Dorian Lambert, Marquis de Montalembert, being sent to keep track of Lillian is no mean task. He’s wanted the fiery vixen since he first heard of her five years ago. But wooing the lady while fighting the demon uprising is no easy feat, especially when the lady’s tongue is as sharp as the Japanese sai blades she favors for eviscerating the spawn of hell.

These two will have to learn to trust each other fast, because the demon master is back, and he’s planning to turn Edinburgh into a living hell…

Excerpt
He left his trousers and blouse on and approached the bed. Her heart was near to pounding out of her breast. It was a sensible offer, and yet she wondered if she’d made a misjudgment.
The intensity of his gaze was enough to warm her entire body.
“You are correct in that I never take what is not offered freely and with some enthusiasm, Lilly.”
“Then we should be able to pass the night together without my having to kill you.” Her voice sounded strained. Had he heard it?
If so, he was too much a gentleman to say anything. Dorian sat and put out the lantern before stretching out beside her. The heat of his body seeped through the bedding, warming her from top to bottom. It was going to be a lengthy night.
The waxing moon shone through the window. He turned his head and met her stare. “I think it will be a long night.”
She giggled. “I should lie and tell you that you are being a foolish man, but I cannot. It is uncomfortable to share a bed with a stranger.”
“Is that what we are?”
“I barely know you.” Her heart jumped.
He smiled and rolled to his side, facing her. “And yet, I feel I have known you for years.”
“How so?”
“My brother, Brice, often writes me about his students. You were the topic of many stories when he trained you. Those letters got me through many desperate nights.”
He had an advantage over her. Her instincts told her to move away, but there was no place to go in the small bed, and the notion of spending the night on the floor did not appeal to her. “Where were you?”
“I had a commission in the army.”
“You fought the French?”
“Do not sound so surprised. France abandoned my family while England gave us a home. My loyalties are quite clear.”
“Interesting.”
He smiled. “Tell me about your suspicions of Shafton. We can talk until I am too tired to think about your stunning body lying just inches away under the blanket.”
His nearness distracted her from the seething anger that often returned at the mention of Shafton’s name. “You saw how he reacted during the meeting. Why would he become so unreasonable unless he had something to hide?”
“He is tasked with gaining intelligence. Perhaps he was merely deflecting the blame. He has had little success in finding vital information.”
Normally she’d feel the rise of fire in her belly. Anyone who defended that miserable nobleman was asking for a scolding from Lillian. Even so, his calm voice in the moonlight, the warmth of his body so close to hers, and the intimacy of the setting, it was as if a balm fell over her. “I believe there is more to it. Why does he not acknowledge his daughter’s life was saved or that the master was damaged in the ascension?”
“He did say he felt you had made the wrong choice in saving the countess rather than focusing on destroying the ritual.” He pushed a stray hair back from her cheek.
The touch set her body on fire. She swallowed the lump clogging her throat. “Do you believe that, Dorian?”
He closed his eyes briefly. Was he as affected by their closeness as she was? His dark gaze trapped her. “I have read the report several times. I don’t see how you could have acted in any other way. I believe Belinda was and is too valuable to The Company to be sacrificed without the assurance her death would bring us victory. Also, she was necessary to the success of the ascension. By removing her, you succeeded in damaging the master.”
He opened his mouth as if to say more, then closed it again and sighed.
“And?”
He leaned in until his lips were only an inch from hers. “And the sound of my name on your lips in our current setting is the sweetest thing I have ever heard.”
She tried to back away, but the wall behind her gave her nowhere to go. “Dorian, I…”
He kissed the tip of her nose and smiled. “I know, Lilly, but you asked.”


Romancing the Readers would like to thank A. S. Fenichel for stopping by! Give her a warm welcome!
Thank you for having me here today. I’m thrilled to talk about my brand new book, Deception (Book 2, The Demon Hunters). In all The Demon Hunter books The Company is running the show, most of the time in the background, but sometimes with an iron fist. It’s a kind of paramilitary group, but not like anything you’ve ever seen.
The Company – An organization, run by Drake Cullum and created to keep demons from taking over our world.

But it’s so much more than that. When I started writing book one, Ascension I had no notion about a series. I’d written the first three chapters and I hit a wall. I couldn’t figure out how to tell the demon part of the story. One day, while out for a walk, I realized this was not one book. The love story was one book but the demon story was going to take a lot more time. That was the day The Company was born.

The Company is a the only place in Regency England where all walks of life are equal. In fact it may be the only place in any era, where wealth, social standing, title, race, gender and education have no bearing on your place within The Company. Lords and Ladies fight alongside scullery maids and hack drivers. It’s the only place where a former mistress can rise to legendary status and gain the respect and love of a marques.

When The Company was first created there were only a few hunters. As time went by, the demons grew stronger and more hunters were brought in and trained in Scotland. When the master Ascended, things really got out of hand and even more hunters were needed. It makes no difference where the hunter comes from, demons are the ultimate equalizer. If you can complete the training, you too can become a member of The Company.

This was fun. I hope you enjoy Deception as much as I loved writing it.
A.S. 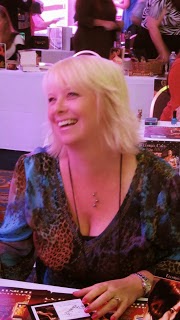 Author Info
A.S. Fenichel gave up a successful career in New York City to follow her husband to Texas and pursue her lifelong dream of being a professional writer. She’s never looked back.
A.S. adores writing stories filled with love, passion, desire, magic and maybe a little mayhem tossed in for good measure. Books have always been her perfect escape and she still relishes diving into one and staying up all night to finish a good story.
Multi-published in erotic paranormal, contemporary and historical romance, A.S. is the author of the Mayan Destiny series, Christmas Bliss and many more. With several books currently contracted to multiple publishers, A.S. will be bringing you her brand of romance for many years to come.
Originally from New York, she grew up in New Jersey, and now lives in the East Texas with her real life hero, her wonderful husband. When not reading or writing she enjoys cooking, travel, history, and puttering in her garden.