Excerpt & Giveaway: The Orchard at the Edge of Town by Shirlee McCoy 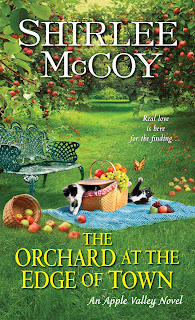 The Orchard at the Edge of Town
Apple Valley # 3
By: Shirlee McCoy
Releasing July 28, 2015
Zebra

Apricot Sunshine Devereux-Miller needs to stay lost.  Her eccentric aunt's home in Apple Valley is the perfect place to forget her cheating ex-fiancé and get her no-longer-perfect life back under control. Plus, it couldn't hurt to fix up the house and turn its neglected orchard into a thriving business.  And if Apricot can keep Deputy Sheriff Simon Baylor's two lively young daughters out of mischief, maybe she can ignore that he’s downright irresistible—and everything she never dreamed she'd find ...

Simon isn't looking to have his heart broken again.  He already has his hands full raising his girls. And lately he's thinking way too much about Apricot's take-charge energy and unwitting knack for stirring up trouble. He can't see a single way they could ever be right for each other. Unless they can take a crazy chance on trusting their hearts—and risking the courage to finally find their way home.

Excerpt
“Taking a plane trip somewhere?” Deputy Baylor stood beside her as she dragged the carry-on case from the trailer. He smelled like the outdoors. Clean and fresh with just a hint of something darkly masculine. She might have been intrigued if she weren’t completely done with men.
“Was going to take a plane trip.” She unzipped the front compartment.
“To?”
“Aruba.” She pulled out her passport and driver’s license. Thank God. She really didn’t want to spend time in the local jail. She especially didn’t want to have to call her family to come bail her out. She loved every one of them, but they were bigger than life.
At least, bigger than her life.
She might own a multimillion-dollar business, but she enjoyed peace and quiet. She liked fireplaces and good books, hot chocolate and strolls at midnight.
She did not like chaos and noise and . . . well . . . everything her family stood for—free love, self expression above personal responsibility, pursuit of happiness rather than financial stability.
“Is that your license?” Deputy Baylor prodded, and she realized she’d been standing there in that blasted dress, staring at her driver’s license like it could reveal the secret to self-actualization.
“Yes. Here you are.” She held it out to him, blinking as she looked into those forest-green eyes. He had long, black lashes that any woman would have coveted, but somehow they didn’t add any femininity to his craggy face.
No. Not craggy.
Lived-in. Fine lines near the corners of his eyes. Deep creases on either side of his mouth. He didn’t look much older than her. Maybe thirty-five, but he looked like he’d lived through some tough times.
Deputy Baylor glanced at her license. He didn’t mention that she’d been a bleached blonde when the photo was taken. Lionel’s stupid idea. Now that she was thinking about it, he’d had a lot of stupid ideas.
“No-good, two-timing son of a chimney sweep,” she muttered under her breath.
The deputy looked up, a puzzled smile easing the hard lines of his face. “Did you just call me a two timing son of a chimney sweep?”
“Not you. My ex. He arrived at the wedding late. Not a good beginning to forever.”
“You were married?”
“Almost.” She lifted the poufy skirt of her dress. “Isn’t that obvious?”
“I’m not much in the know about women’s wedding fashion,” he responded, that hint of the Deep South even more pronounced. “I’m not much in the know about women’s fashion in general.”
“You’re not from around here,” she said. It sounded like a pickup line, and she wanted to pull the dang words right back into her mouth as soon as she said them.
“Neither are you,” he replied, without even a hint of flirtation in his voice. That was exactly how she wanted it, but for some reason her cheeks were hot and she couldn’t quite meet his eyes as he handed the license back.

Shirlee McCoy spent her childhood making up stories and acting them out with her sister. It wasn’t long before she discovered Nancy Drew, The Hardy Boys, her mother’s gothic romances . . . and became an ardent fan of romantic suspense. She still enjoys losing herself in a good book. And she still loves making up stories. Shirlee and her husband live in Washington and have five children.
Readers can visit her website at www.shirleemccoy.com.