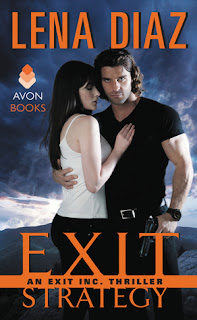 Blurb
Lena Diaz launches her thrilling new series featuring the undercover vigilantes of EXIT Inc. with a skilled operative putting his life—and his heart—on the line for a woman in trouble...

When Sabrina Hightower awakens to the sound of an intruder, she figures he's there to rob her, murder her— or worse. She doesn't expect to be carried off by a muscle-bound stud with male-model good looks... or that he came to rescue her.

Mason Hunt became an enforcer with EXIT Inc. to eliminate the bad guys—terrorists, militia groups, all those who would do America harm. But his latest target is innocent. If EXIT could lie about sultry, strong-willed Sabrina, what darker truths might they be concealing?

Going rogue in the rugged North Carolina Mountains, Mason risks everything to keep Sabrina close, especially now that EXIT's lethal assassins are chasing them down. The heat is on... but it's nothing compared to the slow burn of seduction.

She wasn’t sure who was more surprised. Her, because he’d managed to break into her home, again, in spite of three bodyguards. Or him, because she was naked.
One thing was for sure, he wasn’t shy about enjoying the view. His dark gaze roamed leisurely over the upper swells of her breasts crushed against his chest, before he looked her in the eyes. The sudden pressure against her belly told her he wasn’t unaffected by her nakedness.
Her face flamed and she tried to tell him to let her go, but her words came out muffled against his hand. His erection continued to harden against her belly, and since that’s where her hands were trapped between them, she was literally getting a handful of him.
A flash of heat swept through her, making her lower belly clench and her toes curl against the floor. To her shame, her body was just as turned on as his, and the shiver that swept through her was just as telling as his erection.
His mouth curved in a knowing smile.
Damn him.
He bent down toward her. Was he going to kiss her? She hoped so. Because this time a Kevlar vest wouldn’t save him from her bite.
But instead of kissing her, he pressed his lips close to her ear, his warm breath tickling the fine hairs on her neck.
“We need to talk,” he whispered, his lips brushing against her skin, raising goose bumps. “I’m going to move my hand. If you scream and alert the guards downstairs, I may be forced to kill them in self-defense. Neither of us wants that. I just want to talk to you. That’s all. Do you understand?”
He waited, his body pressed against hers so tightly that she could feel his heartbeat against her breasts. She didn’t doubt what he’d said. If she screamed, he really would kill the men tasked with protecting her. She slowly nodded, letting him know she understood and that she wouldn’t make a sound.
“Only whispers,” he said. “We’re going to have a calm, quiet conversation.”
She nodded again.
He moved back, just enough to pull his hand away from her mouth.
She licked her dry lips.
His erection pulsed against her hands.
Part of her was so mortified that she wanted to crawl under the bed and hide. The other part, a part she didn’t even recognize, wanted to stroke that impressive erection through his jeans just to see how he’d react.
“Please,” she whispered, refusing to meet his gaze, afraid he’d see the confused jumble of fear and desire roiling inside her. “Let me get dressed.”
Surprisingly, he immediately stepped back.
The heat in his gaze reminded her that she was still standing there, completely naked. She ran into the bathroom for a towel. 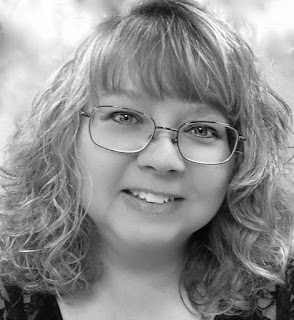 Author Info
Originally from Kentucky, romantic suspense author Lena Diaz also lived in California and Louisiana before settling in Northeast Florida with her husband, two children, and a Shetland Sheepdog named Sparky. A Romance Writers of America Golden Heart® finalist, she's won the prestigious Daphne du Maurier Award for Excellence in Mystery/Suspense and has been a finalist for the National Excellence in Romance Fiction Award. She loves to watch action movies, garden, and hike in the beautiful Tennessee Smoky Mountains.


Since the first book I read of Lena Diaz I was hooked. Her books have the humor that I love so much with characters that make me think of them, even after the book is done. Exit Strategy is book one of Exit Inc series. I will tell you right now there was a lot about this story that I liked, and some that I didn't. But as a whole it was a good book. So lets talk about the good and bad of Exit Strategy!


I loved the characters, well at least the good guys. Haha! You won't be able to not feel for Sabrina. What she's gone through with her family will just break your heart. You'll have to read the book to know just what happened to her family. Yes, I'm mean sometimes. Let's talk about Mason. Oh Mason! You will not be able to not like him. He's such a good guy. Really cares about doing what's right. He's the perfect hero.

As you can tell I pretty much loved everything about this book. I do have a few things that I did. I didn't care for the fact that the bad guys got away with what they did. Of course I know they have to get away with it so that the series will continue, still doesn't make it easy. I wanted to hurt them myself.

My biggest issue with the book is that it's a new series but if you hadn't read at least Take the Key and Lock Her Up you might feel that you are missing something. The main story thread, the Exit group, starts in Take the Key and Lock Her Up. Now I know that this won't bother everyone. But I had to mention it for those that it will bother. There's only four books in the Deadly Games Series so I would just start with them. Believe me when I say that you'll like them and it will be worth it.

To conclude even with my few issues I really enjoyed the story and can't wait for No Exit which comes out January 26th, 2016. A long wait but now you really have time to read the other series.